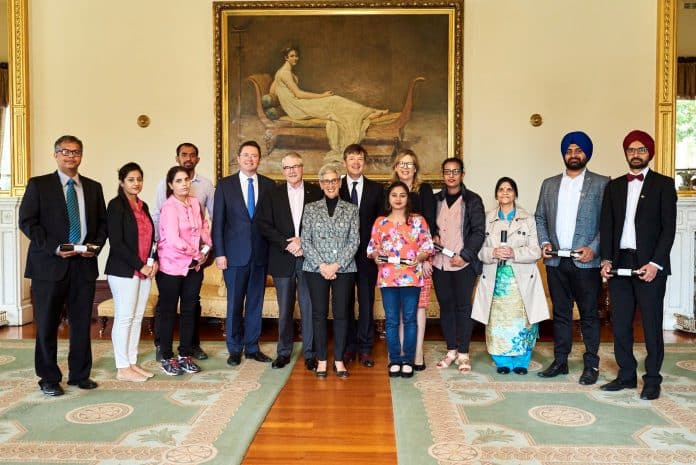 Volunteers from the Gurdwara Siri Guru Nanak Darbar have been honoured this year in the 2019 Vic Premier’s Volunteer Champions Awards.

They won the volunteer award in the Teamwork category, for their team of ten volunteers including Madhu Bhatia, Navpreet Dhanoa, Ramandeep Kang, Harjinder Kaur, Harjit (Ravneet) Kaur, Brijai Parikh, Randeep Saini, Avtar Singh, Manjinder Singh, and Ramneet Kaur Walia.
These Sevadaars (volunteers) were among 57 other compassionate individuals who were honoured at a ceremony at the Governor’s House on 1 Dec.

The Premier’s Volunteer Champions Award is presented to community members who have exhibited unwavering passion, commitment, and dedication to assisting their community.
In their short history, the Siri Guru Nanak Darbar has generously aided others through their programs and volunteer work.

“We spread a very simple message of love, respect, and compassion,” said Harpreet Kandra, a Sevadaar who is part of the Officer Gurughar.

“Our Gurughar is based on Guru Nanak’s principle of humanism,” he explained to Indian Link.

“We aim to build a culture that connects people with his 550-year-old teachings,
which continues to remain valid today.”

The recipients of the volunteer award were praised for going beyond their mandate in this place of worship (Gurdwara).

“Our volunteers are the backbone and foundation pillars of the Officer Gurughar,” stated Mr. Kandra.

“They dedicate many hours into volunteering, despite their jobs and busy lives.” Since January 2019, the group has showcased how ‘sharing and caring can win hearts’, by forging friendships with over 20 organisations to promote community wellbeing.

Their work with culturally and linguistically diverse groups and Cardinia’s interfaith and Casey’s multifaith networks have also helped to promote social cohesion within their community.

Through this strong engagement and collaboration, the group has undertaken several community-based activities. They have previously provided free meals to BlazeAid volunteers, collected donations for Bunyip bushfire relief, organised warm clothing collection for needy homeless people, planted over 650 trees on the property of the temple, organised prayers for families effected by tragedies and much more.

Currently, the group is working alongside the Cardinia Shire Council on a Christmas hamper initiative to provide essentials to those in the community who need it most during this upcoming festive season.

The charitable acts of these volunteers have had substantial impacts on the wider community. As other organisations approach the Officer Sikh Gurughar to collaborate on many initiatives, the group is able to enlighten community members with a better understanding of the Sikh and Indian culture.

Six different primary schools reached out recently to collaborate and develop social justice programs, in an effort to enhance and create awareness within young children.
The group also explores the concept of how discrimination can be tackled through racial awareness. For Harpreet, one of the greatest impacts has been that Sikh members of the community have become more accepted by others.

“We are no longer considered aliens with our turbans and beards,” he said. Of course, he remembered his Sangat (congregation) in his thank you message: “Congratulations to all the Sevadars and Sangat. This is a great achievement to have within the first year of our Gurughar.”

The Officer Gurdwara successfully overcame hurdles to be launched as a place of worship, with the all-clear given mid-last year. That at its foundation, the Sikh banner was raised alongside Australian and Aboriginal flags, was but a harbinger of things to come. With its agenda of social programs, the gurudwara is well and truly making a place for itself in the south-eastern region.

Visit the Gurdwara (on Thursday evenings or Sunday mornings) to volunteer, enjoy a vegetarian meal, take a tour of the facility and contribute suggestions for a harmonious Cardinia Shire.