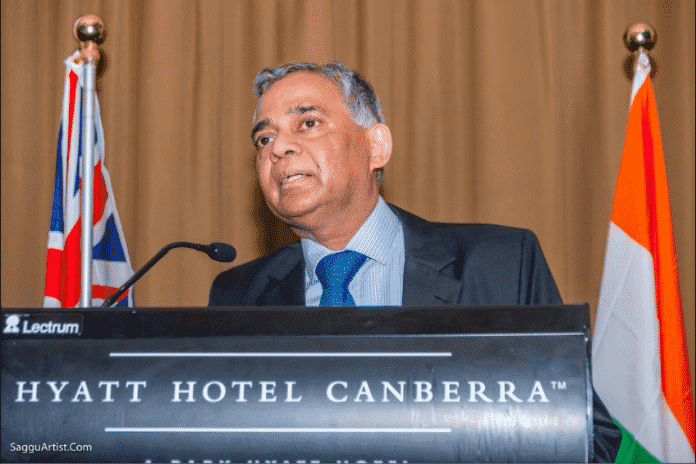 More than 250 thousand Indian nationals, including about hundred thousand students, are stranded in Australia amid coronavirus pandemic. But their families back home have nothing to worry about.

India’s High Commissioner to Australia, A. Gitesh Sarma, told IANS this week that Indian students are valued in Australia. Their welfare and well-being remain the highest priority at all times.

In a virtual interview with focus on the steps the Indian government is taking to support those stuck in Australia, he said when the outbreak happened more than 250,000 Indian nationals were staying in Australia, including about 100,000 Indian students.

“But a large number of our nationals are here on long term arrangements,” he said in a query to how many Indian students and travellers are stranded owing to the pandemic.

Education is Australia’s largest service export to India, valued at $5.5 billion and accounting for around 85 per cent of the total, according to Australia’s Department of Foreign Affairs and Trade (DFAT).

On the students, mainly from Punjab, struck amid shutdown of international airports in India and their incomes from part-time jobs cut off and limited savings eroding steadily, he said,  “Obviously it is not possible to create in a short while an entirely comprehensive arrangement.”

“But our High Commission and three Consulates in Sydney, Melbourne and Perth have been actively engaged in helping the affected Indian nationals, especially the Indian students in the fast-evolving situation.

“Besides putting in place a multi-platform helpline, guidance and response system, a nationwide system has been set up with partner diaspora organisations, with part funding from the Mission to provide take away meals and basic provisions.”

According to the diplomat, around 30,000 meal packs and grocery kits have been distributed to needy persons so far.

“We are also assisting for accommodation and medical assistance from those in acute distress, in partnership with diaspora partner organizations and individuals. We are proud of the Indian diaspora for their selfless service.”

He said the Mission has also tied up with the Indian Medical Association of Australia and other Indian diaspora in the health sector to set up virtual clinics to provide for medical consultations in difficult situations.

“On the external front, the Mission is closely engaged with key Australian authorities, ministries and universities to provide all possible practical relief to the affected Indian nationals.

“Recently a number of Australian universities have announced their own plans to support the international students impacted by the pandemic,” Sarma said.

“We will continue to regularly review the situation to ensure an adequate response to any situation”.

With the 700,000 strong Indian diaspora, India and Australia have special ties.

On the Australian government’s message to those who are not citizens of Australia to ‘go home’, the envoy said all the issues of concern are discussed freely.

“We have dialogue at high levels, including the Prime Minister and the External Affairs Minister. Our understanding is that Indian students are valued in Australia,” he said.

Elaborating further, he said as one of the fastest growing migrant community, the Indian diaspora plays a very vibrant role in the Australian milieu.

Their tremendous contribution to the Australian nation building efforts has been repeatedly acknowledged and appreciated at all levels.

“With encouragement from the Australian government, a number of relief measures have been put in place by various Australian universities. These are aimed at supporting the international students impacted by the pandemic.”

On the recent racist assault on two Chinese students, he noted: “Besides regular channels of communication, the Indian High Commission and the Consulates have regular video conferencing with representatives of the student community to understand and respond to their needs in the evolving situation.”

“We have set up a dedicated 24×7 emergency helpline in the Mission and all three Consulates and also have used technological means in order to be available at all times.”

Expressing concerns of the parents who are anxious about the fate and future of their children in Australia, he said: “We fully understand the anxiety and concern about the wellbeing of children living in far-off places during this period of unprecedented crisis. The wellbeing of these children is most important.”

“All possible efforts are being taken to ensure the welfare of every Indian student in Australia. In general, the efforts to tackle the pandemic are seen to have yielded positive results in Australia.

“The number of cases here are less than 7,000 and increases are now in single digits. This should also be reassuring. Everyone should take and follow guidance from those with medical and other relevant experience,” he added.

COVID19: Do international students regret not going back home?