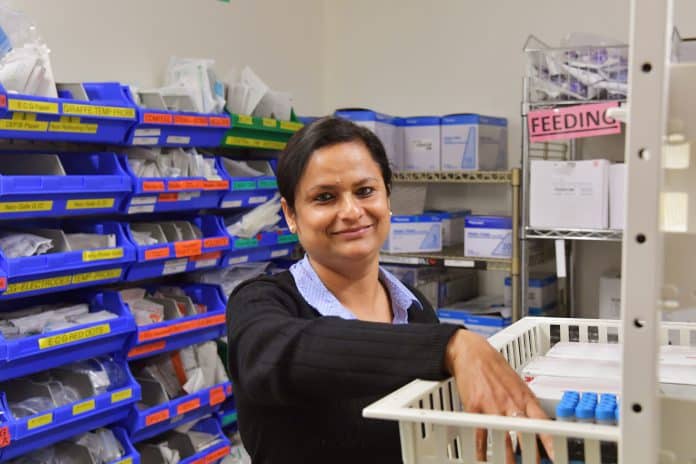 Earlier this month, 13 top nurses, midwives and those assisting, were recognised for their work by Minister for Health and Medical Research Brad Hazzard, at the annual NSW Health
Excellence in Nursing and Midwifery Awards. One of the recipients of these nursing awards was Meenakshi Baveja, Assistant in Nursing at The Children’s Hospital Westmead.

Since the past ten years, Meenakshi has provided tireless support to her team in the Grays Ward at the hospital, always with a smile. The nursing awards honour individuals who have been nominated by their colleagues and patients for making a real difference to public health system. While nurses and doctors are the visible face of our health system, it is the work of those who work behind the scenes that often goes unsung. It is not the first time that Meenakshi’s team members have tried to acknowledge her great work in helping them deliver their best for patients.

Nominated for the same nursing award in 2015, she was a finalist then but they thought she deserved the top award and nominated her again for this year.

Speaking with Indian Link while on a well-deserved break for a few weeks, Meenakshi is quick to play down her own work, acknowledging that it is her team members who bring out the best in her.

“My work is supporting my team. I look after stocks in the ward, preparing new admissions set up, helping with lactation set up at times, answering phone calls and emails – providing
indirect care for the patient overall,” says Meenakshi. She loves every part of her job but says “I love making beautiful beds for the babies the best!”

Being in an intensive care unit for children, though it is distressing for Meenakshi to see very sick babies, she says that she tries her best to make things easy for her little patients with the support she provides her team who deals with them directly.

“It is sad to see sick babies but harder for their parents. I love interacting with their parents, especially the new mums when I can help with lactation and other services,” says Meenakshi Baveja.

She adds that it took her many years to get used to the distress and that it can still be hard sometimes. However, each day she loves going to work and being part of her team, making a difference to patients on a daily basis. The greatest award for them dedicated team comes from the hundreds of ‘thank you’ cards and letters they receive from parents when they leave the hospital.

More than 53,000 nurses and midwives work full-time and part-time in NSW Health hospitals and health services. So it is no mean feat for Meenakshi to be one among the 13 winners. The future holds much promise. Meenakshi Baveja has recently taken up the role of clinical support officer and wants to train to become a registered nurse one day.
“I’d love to volunteer in the same ward,” she says with hope.