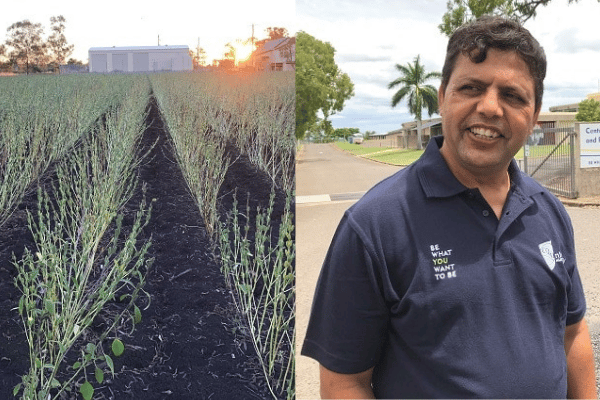 The varied weather conditions in different parts of India – for centuries at the centre of the spice trade – are ideal for growing a range of spices. Australia too has varied climate zones, ranging from equatorial, tropical, sub-tropical and temperate to deserts and semi-arid regions. So potentially a variety of spice crops could be grown here too.

“Demand for spices is worth $30 billion in the global market and Australia produces just 3% of this,” Surya Bhattarai said.

He was speaking to Indian Link about CQU’s Spicing Up Northern Australia project.

Historically the demand for spices has shaped international trade routes as well as the structure of world economies in a way that can still be felt today. There were numerous wars fought over control of spice routes and arduous voyages undertaken in an attempt to reach the source of spices, such as those by Christopher Columbus and Vasco da Gama in the 15th century.

Today these condiments are a staple of many a pantry, and demand not restricted to just Asian and Middle Eastern kitchens.

Recognising that this demand for spices shows no sign of slowing down the Institute’s cropping cluster started to research growing spices in Australia.

“Spices are used in ways that go beyond flavouring food now,” Surya observed. “Demand from the wellness industry has fuelled a boom for spice extractions in the form of oils and oleoresins, highly valued in the nutraceutical and pharmaceutical industry.”

As an expert crop physiologist, Surya has aligned his current research with industry needs. His team at CQU works closely with commercial partner Agriventis Technologies. Explaining how the process of commercialisation in agriculture works, he said, “Trials are first done in university plots, then tested via field trials with farmers at multi-locations. Results generated from manual operations under the small plot trials are then tested for adaptability to broadacre mechanised management from planting to harvesting.”

Surya admits that high labour costs in Australia necessitates mechanisation to make competitively priced products. They work with engineers to research equipment for planting, harvesting, cleaning, threshing and grading. “The entire value chain in involved. Unless all the links of this chain are connected, it would be hard to move this new industry forward,” stressed Surya, presenting a new face of academia, moving beyond basic research.

It is a gradual move from research to commercialisation. “Once we understand the science, we connect partners such as Agriventis with farmers,” he said. Agriventis has a closed chain system whereby they supply the seeds and buy the produce from farmers, providing all the required post-harvest value chain management. Such research relationships between universities and companies are mutually symbiotic, enabling innovation for industry, and research funds and acclaim for universities. “Working with a range of partners helps to cover a wider area of research,” said Surya.

The team is particularly upbeat about the potential for black sesame, a crop whose drought and heat tolerance makes it a desirable crop choice for northern Australia. It has potential to fit into existing cotton or sugarcane farming systems. Surya observes that previous attempts in Australia to establish sesame production in the ‘90s was focused on white sesame and did not gain momentum due to low commodity prices. Black sesame is a high-value product returning approximately 45% more than white sesame.

Australia’s increasing domestic demand, coupled with global demand, brings new opportunities for growers to enter into commercial production of black sesame and nigella, now in the third and final stage of commercialisation at CQU. Surya hopes to spread the word among other farmers who would like to participate in farm trials. Speaking of opportunities to join, he said, “We do field days when a spice crop is ready for harvest where you can meet with industry partners, growers, local partners and researchers”.

Besides the main crop, they also research the potential of the biomass waste left after harvest of spices. “We try to extract maximum value out of the product by looking at it from the circular economy lens,” says Surya. For example, black sesame crop waste can be fashioned into fire briquettes. Realising that black sesame has special significance in Hindu cremation rituals, the team plans to meet up with suppliers of such products and also priests in Benares, when they travel to India for the International Spice Congress in Kochi in March 2022.

Recent stories in the media about spices tainted with artificial colours containing lead compounds has raised concerns among consumers. Discerning consumers are increasingly seeking foods that have identifiable provenance so that they can choose foods grown sustainably. Surya pointed out Australia’s strong reputation for green, clean food products is an advantage. “With the exception of cotton, Australia does not allow genetically modified crops. So there is an opportunity to supply spices to local market, as well as tap the rapidly expanding global opportunities”.

CQU ultimately hopes to develop a world-class centre for research and training in spices, herbs and aromatic plants. “We would also like to explore unique Australian spices and tap into the traditional knowledge of our Aboriginal community, helping them become future spice entrepreneurs,” Surya said about CQU’s long term vision.