From illness to wellness, the yoga way 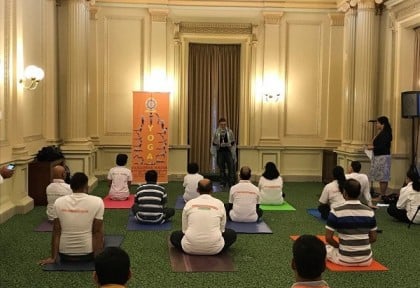 Participation at the annual International Day of Yoga event continues to get better with each passing year. On 21 June, nearly 500 people attended the Illness to Wellness workshop and seminar by Vasudeva Kriya Yoga (VKY) this year.
The event was held at the Spingers Leisure Centre in Keysborough. Visitors attended the free event throughout the day and participated in the Surya Namaskar, Pranayaam, Yoga Nidra and meditation.

According to Rajendra Yenkannamoole, the founder of VKY, the cross cultural and universal appeal that yoga enjoys in the modern world is due to its ability to transform lives on individual and societal levels.
His Illness to Wellness seminar focussed on the many therapeutic effects of yoga and its design to heal the root of physical, mental and spiritual problems on several levels.
“Illness starts with ‘I’ and wellness starts with ‘We’. Yoga helps us connect ‘I’ to ‘we’.  We go from living for ‘myself’ to ‘ourselves,’” said Rajendra.

Citing from the Upanishads and Bhagavad Gita, Rajendra advised people to enjoy life to the maximum, live in the present moment and share their joy with others.
Keynote speaker Ian Gawler from the Gawler Foundation spoke about transforming suffering to the benefit of others. He spoke about inspirational people who transform a really challenging situation into something quite wonderful.
Dr Gawler, who was awarded an OAM in 1987 for his services to the community, also discussed the topic of nature and health.

Inga Peulich, shadow minister for multicultural affairs, expressed her delight at joining yoga practitioners and friends for the event and said she was thankful for the opportunity to be a part of the International Yoga Day celebrations.
During the day, the attendees also heard from Marc Cohen, professor at the Health Innovations Research Institute of RMIT University and neurologist Dr Sanjay Raghav, lecturer of Monash Health & Frankston Hospital.
The age group of the participants at the event ranged from 9 to 80.

“At VKY, our classes cater to any aspirant irrespective of their age, religion, gender, capability or background,” said Rajendra. “That’s the beauty of yoga. It is for everyone.”
VKY was invited to the Victorian Parliament to celebrate the International Day of Yoga where Rajendra pitched the message of ‘Healthcare over Medicare.’ He also led the Yoga Day celebrations in Sri Durga Mandir in Rockbank.

With the increasing presence and global popularity of yoga, what sets VKY apart is their training programme that is based on ancient scriptures like the Upanishads.
As a not-for-profit organisation, money is not the driving force behind VKY, according to Rajendra. “Instead, it is the joy of sharing with the world the Vedic and yogic practices from an ancient civilisation that continue to be relevant as well as beneficial in the modern context.”