Bringing cheer to sick children, with a bit of Starlight 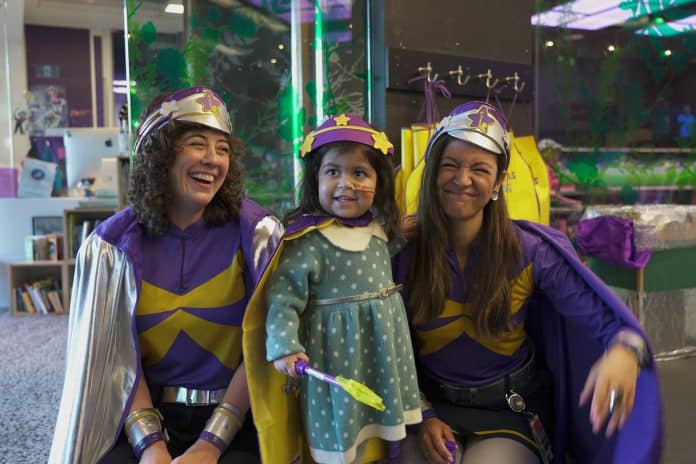 When you see your child singing and dancing in a hospital environment, it’s a stressbuster for us as parents too, says Smital Patel, mother of Aradhya (Aru) Rathod. Describing her daughter’s hospital visits which have been made joyful by Starlight Children’s Foundation through Captain Starlight and their hospital services.

Aru is a bubbly three-year-old who has lived in and out of Melbourne’s Royal Children’s Hospital since she was six months old, first admitted with a collapsed lung. Her heart was only functioning at eight per cent.

“The shock (of the diagnosis) was unimaginable,” Smital recalls. Aru was born perfectly healthy and suddenly she needed life-saving surgery.”

The family discovered Captain Starlight and the Starlight Express room in the hospital when they stayed there for six heartbreaking months, waiting for Aru’s heart transplant. When Aru was first moved into the ward, the rooms’s visit brought a beaming smile to her face – a big relief considering she was plugged into life-saving equipment and limited in her mobility.

Following her surgery, Aru still requires weekly specialist care in hospital. Treatment complications have led her to develop a food aversion so now she is tube-fed. She is also currently undergoing treatment for post-transplant lymphoproliferative disease (PTLD) – a rare complication of solid organ transplants.

“Our life is centered around the hospital,” Smital says. “I can’t work anymore as I need to take care of Aru. My husband Kiran Singh Rathod is our sole bread earner which limits us. Hospital is our new normal.”

With hospital consuming their lives, they are thankful for the little moments of happiness that help them all cope with the relentless strain and worry.

Starlight does an amazing job of taking the away the stress from Aru’s hospital stays. Aru loves visiting the Starlight Express Room to play with Captain Starlight and do art and crafts. The family affectionately call it her “treat” after treatment, and love that the room has something for children of all ages.

“They have everything from toys to books to board and electronic games,” Smital describes. “Aru is usually cooperative through even the toughest procedures because she knows it will be followed by a trip to the Starlight Express Room. I also get involved with the activities, and however painful the medical procedure or drug infusion may have been, as soon as Aru sees Captain Starlight, her face lights up and she forgets the pain. The mood is uplifted for all of us.”

Smital says Starlight has such a positive impact on their lives, she can’t imagine hospital without the fun and happiness Captain Starlight brings.

Starlight Children’s Foundation is currently attempting to raise $250,000 to be able to continue delivering fun and happiness to the seriously ill and hospitalised children around Australia. Anyone can make a donation on the Starlight Day website, with all donations made before midnight AEST Sunday 3 May to be doubled by Starlight’s corporate partners.

Since its establishment in 1988, Starlight is the broadest reaching children’s charity in Australia. There is a Starlight Express Room in every children’s hospital in the country and over 180 Captain Starlights nationwide.

CEO of Starlight Children’s Foundation, Louise Baxter, says, “Happiness is critical to a sick child’s development and to building resilience. Being seriously ill shouldn’t mean missing out on the fun of childhood, especially when evidence shows happiness helps kids bounce back after going through tough times”.