Bawa Jagdev is awarded the OAM for service to the Sikh community. RITAM MITRA reports 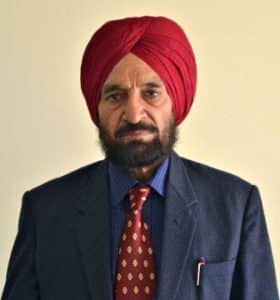 Sikh Australians around the country celebrated a moment in history on January 26, as the Secretary of the Sikh Council of Australia (SCA), S. Bawa Singh Jagdev, proudly accepted the Medal of the Order of Australia (OAM), one of Australia ’s highest civilian honours.

As Secretary of SCA, Bawa Singh’s work has involved a passion to protect and gain recognition for Sikh rights, as well as a longstanding ambition to safeguard human rights and fight for humanitarian issues.

“I truly feel humbled to be the recipient of this prestigious award,” said Bawa Singh. “I may be the first Sikh to receive this honour, but I personally feel that the award belongs to all those who helped me and worked along with me over the years to solve our community problems of which there were many, and achieve what, as a community, we have accomplished. I thank them all.”

Bawa Singh has enjoyed an immensely colourful and successful life, having been born in Punjab, educated in the United Kingdom , worked in Africa and finally settled in Australia . He has taught at various schools and colleges across the world. In 1975, when he and his family migrated to Australia , he recalls that there were not many Sikh families around the country. Seeking to build a strong community, he helped establish the Sikh gurdwara in Revesby – the very first gurdwara in Sydney . This was followed shortly by the Sikh Mission Centre in Austral.

“At that time, the community was small and didn’t have much money to purchase the property – I mortgaged my home in Matraville to help out,” he revealed.

Speaking to Indian Link about the issues Sikh migrants faced, Bawa Singh recalls, “We looked different, and new migrants were subject to various vilifications. I took up the issues with the authorities. They were harassed by the police for carrying the kirpan, as it was illegal to carry a knife with you at the time. In the 1990s when knife legislation was being discussed in Parliament, I wrote to the Community Relations minister and also raised the issue with Premier Bob Carr. As a result, the legislation was amended – Sikhs can carry the kirpan with them for religion purposes.”

A particularly significant contribution of Bawa Singh was his part in allowing the Sikh religion to be officially recognised as a separate religion in Australia . “If a marriage was performed in a gurdwara, the couple still had to get registered in the registry office. I wrote to the Attorney-General, and ultimately the Sikh Council of Australia was allowed to nominate marriage celebrants. So in the Sikh community if someone was to become a marriage celebrant, any marriages they perform are recognised – they don’t have to go to the marriage registry,” he explained.

Bawa Singh’s work is not limited, however, to the Sikh community. “In general if any other community had any problems, I always raised my voice. Bronwyn Bishop was going to introduce a bill saying Muslim girls shouldn’t be allowed to wear their hijab in schools – I wrote against that and made a submission to the government. There were attacks on the Hindu temple in Auburn , including shootings. I took up the issue with the Premier. Internationally, there was a ‘Shoot to Kill’ bill in America , and I wrote against that too. During the 2004 tsunami, as well as the floods in Pakistan , I arranged a council, collected funds and sent it to the victims. Every time there is a disaster, I think it is my duty, simply as a human being, to help as much as I can”.

And for Bawa Singh Jagdev, the most rewarding thing was the simple, yet powerful concept of helping others. “For me everything I have done, no matter how small or big it was, was rewarding because there was a small community and I felt like I was doing something for that community. I don’t think there is such a thing as a ‘small’ or ‘big’ contribution – for me it was my passion to help the community in any way I could,” he stated.