Bollywood blockbusters set to re-release in Australia, NZ and Fiji

As cinemas open across the country, Simmba, Baaghi 3, Golmaal Again will be returning to the big screen 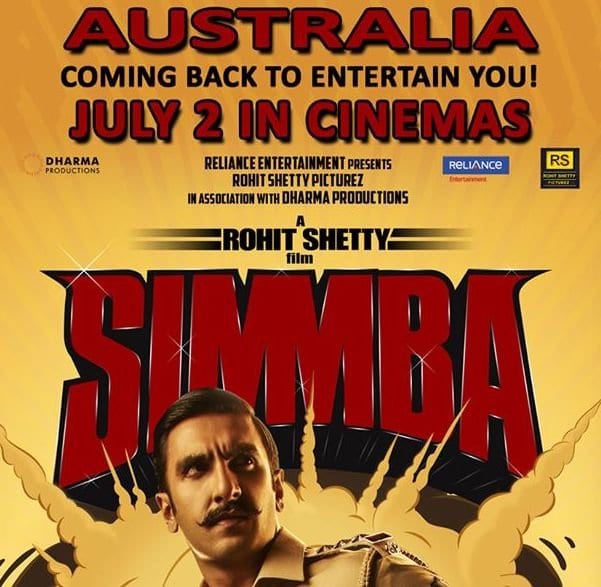 As the world tries to regain normalcy amid the pandemic, major Bollywood hits like Ranveer Singh’s 2018 blockbuster hit Simmba, Rohit Shetty’s Golmaal Again, and Tiger Shroff’s Baaghi 3 from early 2020 will be re-releasing in Australia, New Zealand, and Fiji.

Ranveer took to Instagram to share the good news, with one poster of Simmba reading “Australia bringing cheers back in cinemas on July 2nd”. In this film from Rohit Shetty’s cop universe, Ranveer Singh plays Simmba, a corrupt police officer who has a moral turnaround. The film, also starring Sara Ali Khan, was the third highest grossing Bollywood film in 2018.

Mind Blowing Films, who will be releasing the film in Australia and Fiji, said, “On popular demand, #Simmba to be the first Hindi film to reopen in Australia! Relive your favourite blockbuster on the big screen.”

It was also announced that Shetty’s 2017 comedy Golmaal Again will get a re-release in New Zealand.

Shetty said on Instagram, “New Zealand decides to re-release ‘Golmaal Again’ in theatres making it the First Hindi Film to get a relaunch post COVID. New Zealand is now COVID free and is opening its theatres on 25th June with Golmaal Again. As it is rightly said, ‘THE SHOW MUST GO ON…’”

Other Bollywood films that will see re-releases from Mind Blowing Films include War starring Hrithik Roshan and Tiger Shroff in Australia, Chal Mera Putt and Love Punjab in New Zealand, and Super 30 and Pad Man in Fiji.

These announcements come on the heels of eased restrictions in Australia, including opening cinema doors once again to patrons. As outlined by the Federal Government, cinemas are permitted to hold 20 patrons as long as they maintain 1.5 metres social distance.

The exact date depends on each state and territory.  In NSW, cinemas are expected to open on 1 July. In Victoria, some cinemas opened on 22 June although there’s some uncertainty moving forward due to rising cases in the state. In Western Australia, cinemas were allowed to reopen on 6 June. Cinemas were also allowed to reopen in the first week of June also in Queensland, South Australia, Northern Territory and Tasmania.

There’s no specific date yet for the Australian Capital Territory, though cinemas are expected to open in July.

While these Bollywood re-releases are highly anticipated, some movie buffs have taken to social media to point out there’s still no word of Sushant Singh Rajput’s unreleased film Dil Bechara, despite much discussion around his tragic death and Bollywood’s ‘privilege club’ in the last few weeks.

“Instead of this *** you could release #SushantSinghRajput’s last film #DilBechara,” stated one user.