Ganesh Chaturthi is a major festival in the Hindu calendar. It is held in honour of the elephant-headed Ganesha, one of Hinduism’s most loved gods. The eldest son of Lord Shiva, one part of the Hindu Trinity, Ganesha is celebrated as the god of wisdom, power and remover of obstacles.

The festivities at this time are resplendent with beautiful artisan-made Ganesha idols, food, prayers and much more. After the festival, the idols are immersed in a water body. Unfortunately, the festival is also associated with polluting water bodies thanks to the materials used to make the idols.

A Sydney couple are on a mission to produce, sell and encourage the use of eco-friendly Ganeshas. Kartik Surisetty, an analytics consultant and his wife entrepreneur wife Greeshma Malla take particular interest in sustainability, and believe the festivities and rituals don’t have to cost the earth. “The idols are commonly made with Plaster of Paris and other non-biodegradable materials, which severely affect the marine ecosystem and environment in general,” muses Kartik.

In 2017, the couple along with a close friend, created over hundred Ganesha idols for the festival. They were made with the sole purpose of encouraging those celebrating in Australia to use eco-friendly idols as part of the ritual. Made with terracotta pottery clay, the idols dissolve in water upon immersion and do not leave a layer on the bottom of the water bodies or pollute the environment. “We sold many idols and it was amazing to see a lot of people coming forward to share our vision for a sustainable and eco-friendly Ganesh Chaturthi,” shares Kartik. 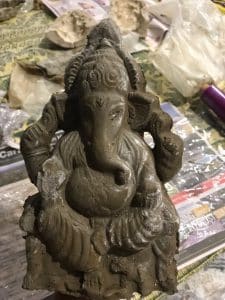 In addition to being gentle on the earth, Kartik and Greeshma donated 100% of the proceeds from the sale to educate two students in India. “The God being a symbol of wisdom, it only felt fitting to give the proceeds towards the education of children belonging to economically disadvantaged families,” he adds.

This year, eight volunteers joined them in producing the eco-friendly Ganesha idols, in preparation for the festival. After the reception and success of the eco-friendly idols last year, the initiative has seen a surge of interest to volunteer and sell more of the idols to Sydney’s Indian community. “The volunteers – Richa Bhasin, Prasanna Rondla, Seema Verma Meanger, Vipin Payyanadan, Tejaswini Raghupathi, Harita Jagana, Yamini and Sonal – have been the reason we were able to make 150 idols this year,” beams Kartik.

The team has been working for a month, ahead of the festival which falls on Thursday 13 Sept. “It is absolutely heart-warming to see more people coming forward to be part of a huge change and paying it forward to those in need,” he adds. He believes that more hands make the whole process that much more special. 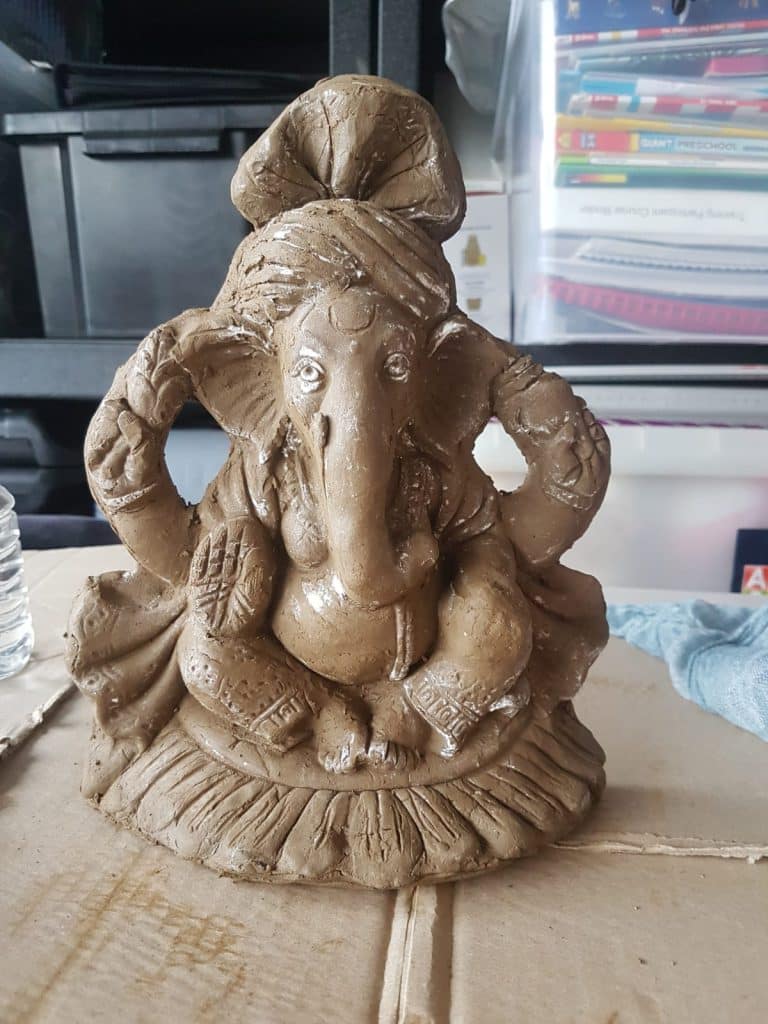 Just like they did last year, Kartik and the volunteers intend to give the sale proceeds of this year towards education of someone in need. “We also plan to set aside some funds to contribute towards Kerala flood relief,” he shares.

Expanding from last year, this time around the clay idols are available in two distinct styles: Maharashtrian turban style and South Indian crown style, priced at $15 each. The idols are handmade with moulds sourced from India and clay sourced from Blackwattle Pottery in NSW.

The moulds are purchased from a producer dealing solely with clay products. Kartik and Greeshma are motivated solely by philanthropy, and refused to be photographed for this piece, supplying us with images of their idols instead. Kartik says the joy of making the idol right from scratch, and knowing it will cause no harm to the environment, is unmatched.

“Even the families of the volunteers get involved, including the kids; this
not only becomes a great family bonding activity but helps teach
the kids about Indian traditions,” muses Kartik.

Clay is biodegradable and inexpensive, and using it to make the idols will have no serious impact on the environment. “After the festivities end, you could immerse the Ganesha in a bucket of water or give it to a temple that collects for mass immersion, thereby not harming your surroundings,” assures Kartik.

With each year Kartik has observed growing interest in the activity and believes in the coming years more people will volunteer for a good cause while enjoying the festival without causing pollution.

Why we immerse Ganesha idols in water

Believe it or not, the original intent of immersing Ganesha idols in water may have been to replenish the environment, rather than to degrade it. As entire villages took their revered Ganesh idols to the water, it was believed that the clay in the idols would help river water settle rather than washing out to sea and leaving the land less fertile. The clay of course needs to be dry in order for it to settle, hence the tradition of keeping it for ten days before immersion.
Idols are typically immersed with 21 varieties of herbs: it is believed these purify the water, and might also have benefits for marine life to thrive.
Philosophically, it is believed that the immersion signifies that ultimate truth – destruction – whatever is created must perish in the end as nothing is permanent; and perhaps also that one must learn to let go of that which one loves dearly.