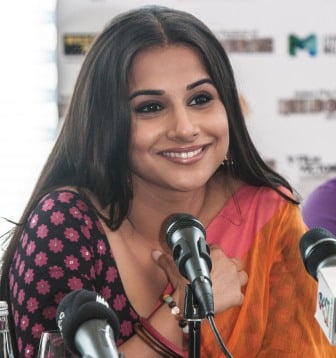 She has the oomph of a diva and the grace of a typical Bhartiya Naari. PREETI JABBAL is floored by Vidya Balan

Vidya Balan’s name in an Indian film comes with a promise and a guarantee. Her roles have garnered commercial viability and artistic credibility. She has been celebrated as one of the most successful Indian actresses of our times, and the modern Indian film industry has been greatly enriched by her. The beautiful and talented ambassador of the Indian Film Festival of Melbourne Vidya Balan was here recently to celebrate the 100 years of Indian cinema and attend the Festival opening ceremony on 3 May at Hoyts Melbourne Central.
As I walked in to interview her at the Langham Hotel I was curious to see which saree she would choose that day. Vidya entered clad in a simple hand-crafted rust, cream and green striped saree, (probably a Sabyasachi design). She looked elegant as always, but was clearly not enjoying the morning winter chill. Giving us a warm smile nevertheless, she wanted to find out if we were filming her or taking photos. When we said neither, she visibly relaxed and signaled her make-up artist to stop doing the touch-up on her lips. We were ready to roll.

Preeti Jabbal: What did you think of the special screening of India’s first feature film Raja Harishchandra shown at the festival opening?
Vidya Balan: I saw this film for the first time and I loved it. It was very special to be able to see this film with my colleagues and fans in Melbourne while celebrating the centenary of Indian cinema. The accompanying music that was played by the local Melbourne group Tihai3 was fantastic. It was fascinating to see all the female characters played by male actors especially the actor who played the role of the queen. I have read about him: his name was Salunke and his acting abilities were praiseworthy. I think all the shots were taken at the same time so they did not have any time for corrections. There were some obvious glitches; however, overall the movie was very charming. I am thankful to the Film Festival for giving me the opportunity to witness this historical film and be part of the centenary celebrations.

PJ: You are such an integral part of the Indian film industry. How do you intend to celebrate the 100 years of Indian Cinema personally?
VB: Personally I feel very blessed and I am grateful that I am living my dreams and witnessing this significant time in Indian cinema. The kind of films that are being made, the type of roles that are being offered and the subject matters that are being explored nowadays are all very exciting. We may not yet be in the golden era of cinema but we are certainly on the right path. Changes do not happen overnight and this is the time when the changes are really manifesting and I couldn’t be working in cinema at a better time than this when the whole world is looking to learn from the success of Indian cinema.

PJ: You have been invited to attend the Cannes Film Festival this year. You will be part of the judging panel and be in the exalted company of Steven Spielberg, Nicole Kidman and Ang Lee. I know there is a lot of speculation on what you will wear, but more importantly, what are you expecting and what are you looking forward to in Cannes?
VB: In my college days I used to attend every film festival that was held but ironically I have not been able to do that since I joined the film industry. Cannes will give me the opportunity to watch films from all over the world and as you said I will be in exalted company. It will be interesting to see how they look at and appreciate films. I am not technically qualified like them and my approach will be more as a viewer and an actor. It will be about how I feel when I watch the films, more heart than anything else. It will be interesting to interact with others and observe how they react to different films. This is my first visit to Cannes and I am looking forward to attending one of the most celebrated festivals in the world.

PJ: In Indian cinema today there are a few ‘bankable stars’ like the Khans who guarantee box office success but they are all men. Given the tremendous success of your last few films do you feel that you enjoy a similar status?
VB: There was a time when films were sold on Sridevi and Madhuri Dixit’s names. Then we entered a phrase when we had such a lack of good roles that women became almost inconsequential in the decade after these stars took a break from films. I think that is changing again and women are now taking centre-stage in real life and in cinema. I believe cinema is a reflection of real life and I think we are leading our lives on our own terms and we are not apologetic about the choices we make. It is no longer uni-dimensional, there is a lot of choice and we are a lot more fun. We have steered away from films where women were portrayed as the central protagonists but they were either glorified or vilified and there was no middle path. Today a woman has various facets to her that makes interesting viewing and therefore people are more willing to watch those films. This gives hope to actresses like me that we can also become bankable stars.

PJ: Vidya, you have the oomph of a diva and the grace of a bhartiya naari. Which one of these is the real you?
VB: (Laughs) Thank you. I think I am a little bit of bit of both. I think Indian women are more naturally sexy than other women. It’s the way our bodies and faces are made. We are well-endowed and curvaceous with sharp features but there is an unmistakable softness and grace as well. In that sense I am as Indian as you can get and happy to be a sexy Bhartiya naari.

PJ: If it’s not your wardrobe, it’s your weight. There is so much scrutiny of your personal life. We even know for instance that you cooked Rajma Chawal for your brother-in-law Aditya Roy Kapur as a treat to celebrate his good performance in his new film Aashiqui 2. How does all this affect you?
VB: What? Was the rajma chawal on the news? (shakes her head in amusement). I do not read the papers or watch TV, as I don’t think I need others to tell me things about me. I feel grateful that people are interested in knowing about me but I don’t think I am interested in knowing about me!

PJ: You said once before you got married that your relationship with Siddharth Roy Kapur resembled the Gujarati dish ‘Undhiyo’ as it was a mix of sweet, salt and spice. Four months into the marriage, how will you term your relationship?
VB: (Laughing) How about Khatti Meethi Dal (sweet and sour lentils)? The dal is something we have every day and yet we do not tire of it!

PJ: What is your opinion of featuring in brand endorsements and commercials?
VB: I don’t think I would endorse alcohol or cigarettes but I am open to endorse any other brands or products that I have personally used or I believe in. There is no opinion as such as we are just leveraging the popularity that we have earned as actors. It works for the viewers, it works for the brand and it makes us money. I have no issues with that and I am associated with a few brands like Nihaar Oil, Ranka Jewellery and Jolly Silks.

PJ: Your new film Ghanchakkar is releasing soon and then you have Badla by Sujoy Ghosh in the pipeline. Are there any roles that you are really looking forward to?
VB: With Badla the script is not finalized so I cannot comment on it, however Ghanchakkar is my first comedy and my second film with Raj Kumar Gupta. It is dramatically different from my role in his film No One Killed Jessica. The character I play in Ghanchakkar is outlandish, loud brash and over the top, and yet she is real. I do see people like this in the world who have such an exalted sense of their own self. I had to work on the Punjabi accent as I play a middle-class Punjabi woman. I had gained weight for The Dirty Picture and Raj Kumar Gupta wanted me to retain that weight – in fact, put on some more – for Ghanchakkar. I protested initially but I retained the weight and now that I have seen a couple of scenes I have realized that it makes my character so much more believable. I hope people enjoy it.

As we wrapped up the interview Vidya posed graciously for some photographs. She then paid a compliment to the photographer (who also happens to be my other half) on how his face appears to be that of a ‘nice and warm person’. My miyaji was so chuffed with what he considers to be the ‘compliment of his life’ that he has since been spotted around Melbourne with a permanent smile on his face, which was hitherto a rarity. This sexy Bhartya Naari with award-winning talent is no doubt a real charmer. The future of Indian cinema seems to be in good hands.
- Advertisement -
Share
WhatsApp
Facebook
Twitter
Linkedin
Previous articleCANCELLED
Next articleIFFM Telstra Bollywood dance off