The role of the arts in diversity 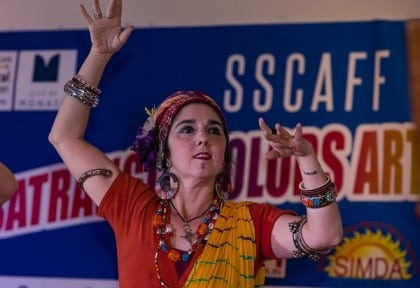 Twelve cross-cultural film makers screened their movies at the event, while recognising their cast and crew, motivating them to promote the social, cultural and economic benefits of cultural diversity.
The event also saw film professionals, eminent speakers and dignitaries converge on one common platform to share their love for and thoughts about the Australian film and arts industry.

The Victorian Multicultural Commission’s Chairperson Helen Kapalos – a media personality herself, presented a keynote speech sharing her career experiences spanning multiple roles in Australian television and film industry. Helen outlined ways for film and TV producers to successfully circumnavigate challenges on their journey.
A panel discussion moderated by Molina Asthana discussions saw actor Cory Corbett and film director Rhiannon Wilson talk about Indigenous representation in Australian films. It was highlighted that Indigenous community involvement in popular culture was limited and largely stereotypical in nature. There is a need for greater participations and a lot that desired to be done in this space.