In a music career spanning over seven decades, Lata Mangeshkar has bequeathed a rich treasure trove of immortal songs that are ingrained in the minds of as many generations of music lovers.

Starting in the black-and-white era when film songs were often recorded in congested studios or even in the open at the dead of night, to the modern-day ‘auto-tuners’, Lata blazed a glitzy comet-like trail that will dazzle for many millennia.

She developed an unprecedented style of singing – moulding her voice to suit the particular heroine on whom it would be shot on the screen – like her male counterpart, the equally legendary Mohammed Rafi did with aplomb, and who remains evergreen 41 years after his death in July 1980, aged 55.

Like all inspirational stories, Lataji’s early struggle to establish herself in the 1940s is one that we cannot ever forget. In those days, she would take a BEST bus and travel from her south Mumbai home regularly to meet Naushad Ali at his Khar West bungalow or in the studios, hoping for a ‘singing break’ under the legendary music maker’s baton.

In the vicious Mumbai monsoon, she would come to Naushad’s home, wearing her trademark sari, carrying an umbrella but totally drenched, shivering and barely able to speak, let alone sing. The music director would offer her piping hot tea and cookies to soothe her, but no songs … yet.

“I felt her voice was not yet ‘ripe’ for my style of music,” said Naushad, the perfectionist, in a conversation with this writer. He was trying to justify not giving her an early break. “To improve her diction and control over words, I advised her to learn and practice Urdu, which she did … and finally, she was ready to record for me.”

The first choices of Naushad were the reigning stalwarts — Noorjehan, Suraiya, Shamshad Begum, Zohra Ambalewali, to name a few.

With time, trained by her father, Dinananth Mangeshkar, Lataji grasped the maestro’s advice and got her first major hit – Uthaye Ja Unke Sitam (Andaz 1949) composed by her mentor Naushad. With it, she ‘arrived’ in the film industry.

After the exit of Noorjehan from India and the fading away of other stalwart female singers, by the late 1950s/early 1960s, Lataji was firmly perched on the top of the heap.

Producers and directors vied for Lataji’s unique voice and style for their top heroines, especially because she could ‘mould’ her voice to suit most heroines. Without doubt, she had become the first among women singers, a position that Mohammed Rafi enjoyed among the men.

READ ALSO: Why OP Nayyar continues to be this fan’s favourite musician 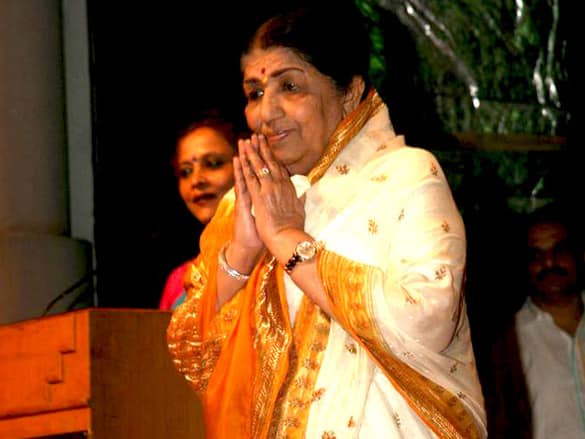 Typically, she brooked no nonsense from anyone – producers, directors, composers, siblings or contemporaries – attempting to clamber anywhere close to her roost.

Bollywood is full of stories of how Lataji ring-fenced her position till the very end, often raising the hackles of her female peers, although male singers, such as Mohammed Rafi, Mukesh, Kishore Kumar, Mahendra Kapoor and Manna Dey chose to maintain a professional rapport with her.

Nevertheless, there were tales of how Rafi once bore the brunt of her “other side”, or certain composers quivering as she gently declined to sing for them after they allegedly dared to commission other singers, for whatever reason.

Lataji’s rise to this position was a far cry from her humble beginnings.
Born on September 28, 1929, as the oldest child of a musically inclined family in Indore (Madhya Pradesh) – comprising father Dinanath, Lataji, Meena (Khadilkar), Asha (Bhosale), Usha and sole brother Hridaynath – she was tutored by her dad from the age of five and also acted in his musical stage plays, till his death in 1942.

Over the decades, she was decorated with a multitude of rewards and honours – three Padma awards, five Filmfare Awards, the Dadasaheb Phalke Award – capped by the Bharat Ratna in 2001. More than that, state governments named awards and institutions after her.

Lataji sang at prestigious live concerts or charitable events, enthralling global audiences, picked up more overseas accolades, such as France’s highest civilian honour, Officer of the Legion of Honour, in 2007, briefly dabbled in high-end merchandise, such as signature jewellery and perfumes, launched a production and music house, and entered into international music collaborations.

Death has only removed her physically. The legacies she leaves behind will outlive her for decades.