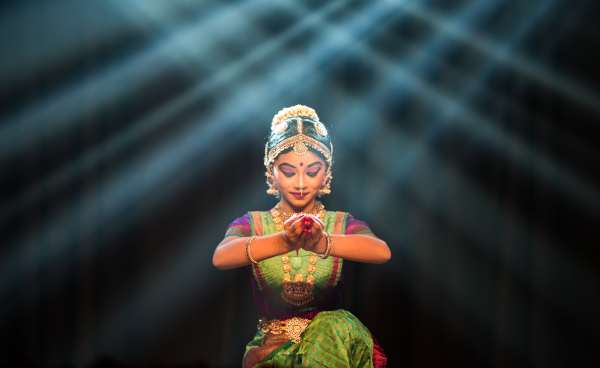 Reading Time: 4 minutesAll the world’s a stage, believes Sagarika Venkat, who is determined to be one of its rising stars with her dance.
Doubly blessed to have her mother as guru, she quite literally grew up at Rasika Dance Academy, soaking in sights and sounds of Bharatanatyam at every step while beginning to appreciate its complex nuances. Ascending the stage for her salangai pooja, a debut solo performance, was therefore not just a natural progression but also her innermost aspiration.

The show titled Swapnam: My Dreams demonstrated the nine-year-old’s resolve to take her dance education seriously and prove her mettle.
“I live, breathe and enjoy dance,” Sagarika says. “Even if I am doing nothing, say waiting at a supermarket, I dance. When I attend a rehearsal or concert, I dance along. Dance means the world. It is everything to me.”
Those gathered at the Redgum Centre recently for the special event, were blown away by her talent, stamina and ability. The maturity and discipline exhibited by the debutante as well as the sheer scale and scope of the evening’s showcase left them with little doubt on what the future holds for this young dancer.
“I clearly underestimated her potential and miscalculated her abilities,” confessed Guru Manjula Viswanath, after the performance.
The promising student, who was absorbing concepts, emotions and movements effortlessly, only began preparations for the event earlier this year. Browsing the web for mythological tales, particularly the animated versions, has always been a happy pastime, fuelling her imagination in the process.
Sagarika relished every moment on the stage as she delivered a flawless performance. Each segment struck a happy balance between strong thematic content, effective storytelling and technical proficiency that normally come with years of dedication. The live orchestra comprising Balasubramanya Sharma (vocal), Janakan Suthanthiraraj (mrudangam), Kiran Mudigonda (violin), Jeyaram Jegatheesan (rhythm pad) and Devagi Vignesh (flute) offered the young danseuse with perfect musical support. The stage effects and costumes added drama and vibrancy to the unfolding tales.

Sagarika began with a ranga geethe in thilang (‘Gajavadana Hey Ramba’), a unique pushpanjali to Lord Ganesha, incorporating sanchaaris choreographed by the danseuse herself. The shuddha nritham piece that ensued paid respect to Thanjavur Quartet.
Varnam, the highpoint of any Bharatanatyam recital, showed off her storytelling skills, with the grueling piece that lasted forty minutes also testing her technique and stamina. ‘Swami Naan Undhan Adimai’ was also Sagarika’s favourite. “I liked it because the lyrics were touching but also because it is based on the Lord of Dance, Shiva. I got a chance to portray so many characters and also become the storyteller. I loved the speed of the jathis as I feel very energetic when dancing.”
Incorporating four elaborate sanchaaris, she began with the story of Kannappa Naayanaar, who unquestioningly gouges his own eyes as a token of supreme sacrifice. This was followed by a tribute to Ardhanaareeshwara, incorporating the seamless union of Prakriti and Purusha. Markandeya and his tryst with destiny came next. Sagarika thereafter explored the tale of Nandanar, Dalit saint Thirunalaipoovar.
Gopalakrishna Bharathi’s ‘Thaa Thai Endru Aaduvaar’ celebrated the cosmic attributes of Lord Nataraja while illustrating her mastery over postures and body control.
The best however, was yet to come. Showing no signs of fatigue or stage weariness, Sagarika narrated at length some of the finest moments from Ramayana, with the nattuvangam putting her through complex jathis. The standout ‘Pibare Raamarasam’ examined the beautiful sacrifice of Jatayu Moksham. The image of Jatayu flapping his wings valiantly in defence of Sita till he drew his last breath in the lap of Rama was etched in our memories. Frame after frame unfolded through subtle emoting and complex footwork. “I loved playing Jatayu and Ravana as both characters are so powerful,” Sagarika recounted.
‘Bhaje Mrudang’, the peppy Abhang, added variety to the tableau in a joyous celebration of life. The rich layering of thillaana in ‘Nalinakanthi’, specially composed for the occasion was clearly intended to challenge her, closing with beautiful saahithyam. Sagarika concluded the evening with ‘Mahalakshmi Ashtotram Namastestu Mahaamaayee’.

As the curtains came down on a stellar performance, proud parents Manjula and Venkat Parthasarathy were clearly overwhelmed by emotion. “This is only the beginning of a very long journey. She has set high standards for herself and we will support her in every possible way,” they reiterated.
Dance has given Sagarika early lessons in the fine art of multitasking. “Initially, I found it hard to manage school work and dance classes. But I want to excel in both, so I have learnt how to manage time,” she said. “Since I have my OC exam coming up, I can practice for it with more time and study without sweat dripping on my page.”
International performances will continue as Sagarika heads to China in July, Malaysia in December as well as Bangalore and Chennai in January for the kacheri season.