Letting the music do the talking 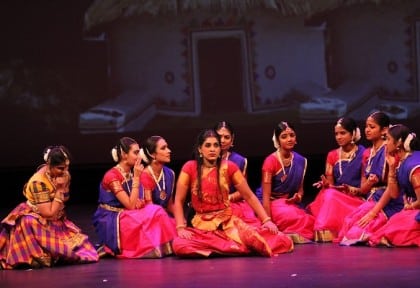 The scenes at the Riverside Theatres in Parramatta resembled a ‘Kutcheri’ session in progress as the profound alapanas, fine ragas and elaborate kritis unfolded!


Carnatic music connoisseurs in Sydney witnessed their own Kutcheri season at the Swara-Laya music festival organised by the Sydney Fine Arts Society (SFAS). The event, in its eleventh year, has grown considerably and attracted audiences from Australia and New Zealand.
The event, held from 10-12 June, showcased several Carnatic greats who travelled from India: ‘Sangita Kalanidhi’ Sanjay Subrahmanyan, acclaimed violinist Dr. L. Subramaniam and talented Veena artist Anantha Narayanan. The season also featured performances by acclaimed dancer and professor Madurai. R. Muralidharan and the multi-faceted Akkarai sisters and upcoming artists like Australian-born Bharatanatyam dancer Christopher Gurusamy.
Sanjay Subrahmanyan captivated the audience with his raagam thanam pallavi in Raga Natakapriya; he displayed his originality by composing the lyrics in Tamil. The ‘rockstar’ of Carnatic music received a standing ovation and a thunderous applause for his performance. Sanjay, along with accompanying artistes violinist S.Varadarajan and Neyveli Venkatesh on the mridangam, started with the traditional list of songs and concluded with rare Tamil kritis.

World-renowned violinist, composer and conductor, Dr. L. Subramaniam focussed on Ragas Kalyani and Abhogi and displayed amazing control and command of the instrument. His accompanying artists DSR Murthy on the mridangam and morsing maestro Ghantasala Sathya Sai were brilliant, making it an outstanding performance.
The multifaceted Akkarai sisters, S Subhalakshmi and S Sornalatha, paid tribute to their grandfather by singing his ghana-pancha-ragamalika. Audiences enjoyed the world-renowned vocalist-violinist sisters’ soulful rendition of the melodious raga Kumudakriya.

Cherthala K.N.Renganatha Sharma’s resonant voice instantly appealed to the listeners, who later lined up to click selfies with him. He left his audience mesmerised with his rendition of composer Muthiah Bhagavatar’s Sachamara Ramavani.
Veena artist Anantha Narayanan played Amritavarshini, a raga aimed at appeasing the rain gods. He performed to perfection this Muthuswami Dikshitar, one of the musical trinity of Carnatic music. Narayanan sure does have a promising future ahead of him!

A noteworthy dance performance on Silappadhikaram, one of the five great epics of Tamil literature, was choreographed by Madurai Muralidharan. The story revolves around a woman named Kannagi and her true love for her husband. It talks about the Pandyan king who had wrongly killed her husband and the revengeful Kannagi who burned the city of Madurai.
Master Balamuralikrishna, a disciple of P.S.Narayanaswami, gave a scintillating performance with his apt selection of fine ragas and kritis. A garland of colourful and melodious ragamalika virutham followed in ragas Sumanesaranjani, Valachi, Sivaranjani and Revati.

The Priya sisters, Shanmukhapriya and Haripriya, known for their synchronised singing presented Raga Todi and Saint Thyagaraja’s compositions. Unfortunately, Haripriya had a sore throat and was unable to perform to her full potential. The noted flautist Mala Chandrasekhar excelled in her performance – her Kalyani piece of Saint Thyagaraja’s set the tempo for the afternoon. She earned a standing ovation for her soul-stirring Veena performance.
Noted Carnatic and playback singer Unni Krishnan’s gentle and lilting voice captured beautifully the essence of Raga Mukhari.
The Australian-born Bharatanatyam dancer Christopher Gurusamy danced to the famous ‘Varnam’ of Ponnaiya Pillai in Raga Bhairavi which explores aesthetic love. The highlight of his performance was ‘Ashtapadhi’ where he showcased his abhinaya skills and footwork.

The festival concluded with the aptly chosen ‘Varnam’ in Raga Surati by singer S Sowmya, who was ably supported by Ramakrishnan on violin and Murugabhoopathi on mridangam.
Swara-Laya organisers deserve accolades for orchestrating an amazing and soulful three-day event. The food was greatly appreciated along with the musical treats at the three-day concert.
- Advertisement -
Share
WhatsApp
Facebook
Twitter
Linkedin
Previous articleIndia's Kidambi Srikanth enters Australian Open semis; Saina, Sindhu bow out
Next articleMy high school life