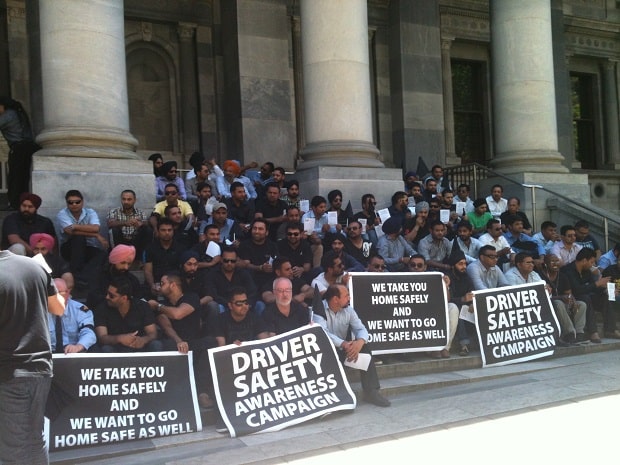 History repeated itself in the fateful early hours of November 16, 2013, when mulitple Indian origin taxi drivers were assaulted by intoxicated men in separate incidents in Adelaide. The previous taxi driver attacks occured in 2008 and 2009. This month, Manbir Singh, a 24-year-old taxi driver who hails from Punjab, India and currently residing at Torrence Ville in Adelaide, suffered a blow to his left eye while trying to protect his fellow taxi drivers stationed at Henley Beach square, who refused to take the fare of five intoxicated passengers, in a taxi which could not seat more than four people and one driver. As a result of the blow, Manbir has lost the vision in his left eye and has been left unable to work as a taxi driver. Doctors who attended to Manbir have said that the chances of recovering his vision are extremely low and he may now have to the injury for the rest of his life.

According to Manbir, there were around 10-15 taxi drivers stationed at Henley Beach Square and a group of intoxicated men approached the first taxi driver  in the queue, but were refused as they were heavily intoxicated and because the number of passengers were more than that taxi could carry. On being refused multiple times in the queue, the group reached Sunit’s taxi, and then they started to punch and kick his taxi. Concerned about the group’s violent actions to his taxi, Sunit who had so far remained inside his taxi, got out to try to pacify the group and stop the damage being inflicted upon his vehicle. However, this did not have the intented result, as instead he was pushed to the ground and attacked. Seeing this incident, fellow taxi drivers including Manbir rushed to stop the violent attack upon Sunit. It was during this time that Manbir was punched so violently that he was blinded in the left eye.

According to Jujhar Singh, an Indian origin taxi driver who was present during the attack, the intoxicated group of five men were further joined by another five-six men, which futher fuelled the intensity of the altercation. Several emergency messages were sent from taxi drivers to ask for help from operators of other taxis during this, as well as calling the police. Police arrived 20-25 minutes later. By this time, Kunal, another Indian taxi driver sustained injuries to his throat. Kunal has now recovered his voice after the attack and returned to India. According to Jujhar Singh, Kunal had experienced a similar incident around a year ago.

“No” was victim Manbir Singh’s response to being asked if he thought the attacks were racially motivated. He also pointed out that since the group were heavily intoxicated, it wouldn’t have mattered who was at the receiving end of their wrath.

There are questions over the treatment of this crime by Adeliade police, who reportedly allowed some of the attackers to flee on the night of the incident. When the Indian taxi drivers requested to lodge a formal complaint they were refused by the officer on duty, who stated that he couldn’t take so many complaints at that time, and they should report the incident in the morning to their local police station. As per a witness account, the only person whom the police arrested was one of the accused who was so heavily intoxicated that he could not move on.

However, the comments that fuelled frustration amongst the taxi drivers was from the police officer on duty, that the only arrest made was due to their display of public disorderly behaviour, rather than because of the incident which occured. This was despite the fact that the incident left one person blind and another without speech in hospital.

In a separate incident, another Indian origin taxi driver, Inderjit Jassal was attacked at Port Adelaide. He was repeatedly punched in the face and is now recovering. “I’m not going to drive taxis any more. Driving a taxi at night is very dangerous,” Inderjit said. Maninder Jassal, the victim’s wife, is reluctant for him to keep driving. “I would say don’t touch the taxi again, for [the] family’s sake”. In another incident, police have charged a man for allegedly robbing a taxi driver at knifepoint at suburban The Barton last Thursday 21 November, 2013.

In the absence of a formal association to represent them, victimised local Indian taxi drivers called for a ‘Driver Safety Awareness Campaign’ to be hosted on November 26, 2013. They walked from Elders Park to Parliament in order to draw the attention of the SA government to the safety of taxi drivers in general. The protest had the participation from around 100 taxi drivers from the Indian community who marched peacefully and presented their concerns to the Minister of Transport Services, Ms Cloe Fox. Ms Fox promised to enforce reforms to support the safety of taxi drivers and subsidise driver safety shields. However, on being questioned about the police behaviour in the recent attacks, as well as the lack of Taxi Council support, she said she was not yet aware of the facts and would investigate. 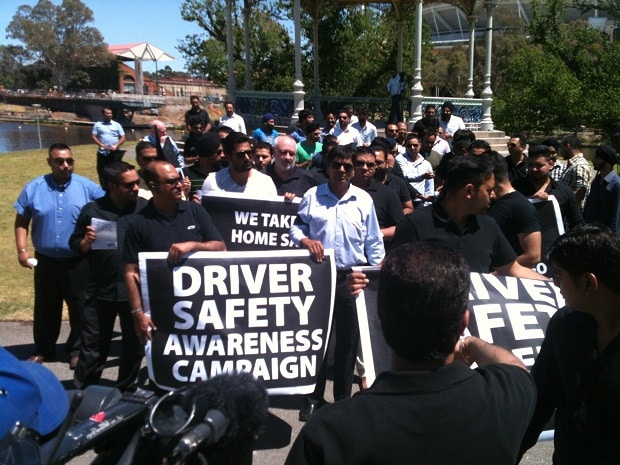 Will the law makers really take action this time to support taxi drivers? If taxi drivers take us home safely, do they not have the right to go home safely too?

SACE 2019: Looking back at the last year of school