It was over ten years ago that I marched alongside other young people to demand action on climate change. It was a windy day, and I held a huge banner in one hand and a megaphone in the other whilst chanting the words “What do we want? Climate Action! When do we want it? Now!”

The sore arms at the end of the march seemed worth it.

There were many rallies organised by the environmental movement that I attended as a student studying Environmental Management at University. We were taught about the effects of increased greenhouse gases into the atmosphere, the need to transition towards a greener more sustainable economy and the challenges of inaction. 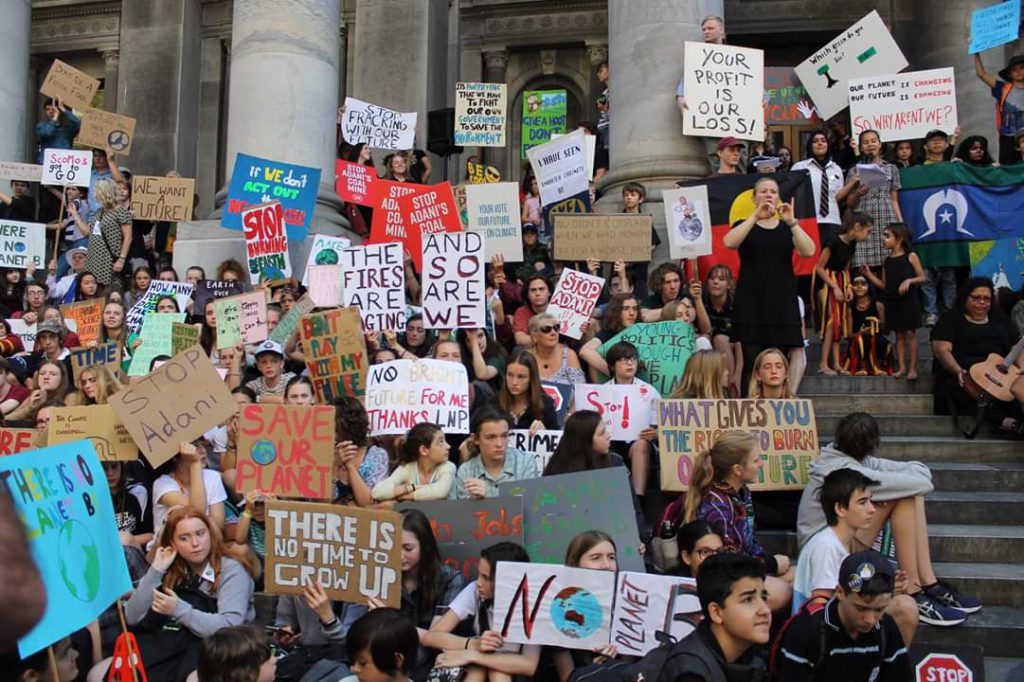 We were calling for fifty per cent carbon emissions reduction in Australia by 2020; a date that, at the time, seemed far into the future. I had thought that there would be sufficient time to turn this ship around.

Sadly, it seems that a decade on, the next generation are still having to pick up megaphones and strike for climate action.

But is there hope? Will their voices be heard?

March 15, 2019 saw thousands of young people send a clear message to the Government that they won’t stand for inaction on climate change. They called on the Government to reject the proposed Adani coal mine in the Galilee Basin located in Central Queensland, reject any new fossil fuel projects and shift the economy towards 100% renewable energy by 2030.

Jagveer Singh, 17, organised the school strike for climate rally in Melbourne. He spoke to Indian Link about why students took to the streets.

“Students in all the major cities and towns walked out of their classrooms to send a clear message to our leaders that they must act on climate change,” he said.

“It was extraordinary to march through the CBD. People came out of their offices to back us, cars beeped in support and we chanted that students united will not be divided,” he described

He added, “The latest Intergovernmental Panel on Climate Change report indicates that we have less than 11 years to curb the dangerous effects from fossil fuels. It’s about being on the right side of history, and students turning out in record numbers across the world are marching for their future. My parents have always taught me to do the right thing, and speaking out for our environment is the right thing to do. If politicians want us to remain in the classrooms then they must listen to the science and take action.”

“As migrants we must participate actively in our democracy and I encourage people to contact their local MP and make their voice heard,” he urged.

Ananya Dasgupta, 15, joined the student strike in Adelaide and is hopeful that young people continuing to raise their voices collectively will bring about change.

“I have always cared about the environment. Issues such as pollution, litter on our streets, plastic in our oceans, the damage to our marine life, and decline of coral reefs is of concern to young people just like me, so what we do now matters,” she told Indian Link.

She described, “When I heard about the student strike action on climate change, I was really excited about getting involved. We put posters up in our school to let other students know.”

And what did her parents think about skipping school? “My parents are really supportive of me, they have similar views and also care about climate change. I saw this one poster at the rally which said ‘you didn’t care when we had Monday off for the horse race’, but our leaders seem to take an issue with us joining a strike to fight for our future.”

“We didn’t create the problem, but we will be part of the solution,” she concluded.

The unprecedented world-wide youth effort garnered mixed reactions from the adults, but the passion did not go by unnoticed. Craig Wilkins, CEO of Conservation Council SA said, “Emergency action on climate change is required and no area of government, be that federal, state or local seems to grasp quite how much work is required. Some of the effects of climate change is locked in so we need to prepare our systems to cope with such pressures. It was fascinating to see the signs on placards focused on key issues such as protecting the Great Australian Bight and renewable energy. The rally was incredibly passionate and upbeat.”

So, I am hopeful. If there is a lesson we can take from students like Ananya, Jagveer or even Greta Thunberg who inspired hundreds of students in over 70 countries to strike for climate action, it is that young leaders are rising to the challenge many of us have sought to address.

Climate change is a global issue, but as one of the highest-ranking countries of carbon emissions per capita in the world, we all need to do our fair share to reduce our footprint.

As Margaret Mead once said, “Never doubt that a small group of thoughtful, committed citizens can change the world; indeed, it’s the only thing that ever has.”