Serenity on the Spice Islands

The natural beauty and historic charm of the little-known islands is an explorer’s delight, writes PETRA O’NEILL 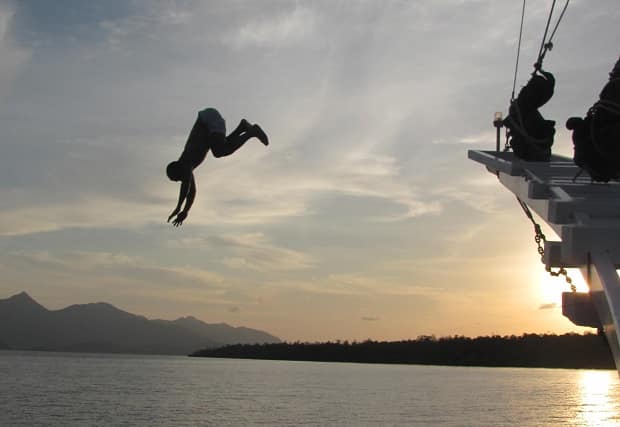 “It’s been three decades since I snorkelled. Can I still do this?” Before I could respond, Alan had flipped backwards into the depths below where I soon joined him to gaze at the dazzling rainbow coloured fish that swam around us.

This was just one of many amazing adventures I enjoyed in Indonesia while on board the Ombak Putih, meaning ‘white wave’, a traditional 36 metre long schooner built from ironwood by the Buginese, renowned seafarers of Sulawesi. The schooner’s functional cabins, large outdoor decks and the bluest of sails would take us on a 12 night journey to to the fabled Spice Islands, an archipelago of scattered islands that stretches for over 4,000 kilometres along the equator in the vast expanse of the Banda Sea of eastern Indonesia.  Many of the small largely uninhabited islands are mountainous, some with active volcanoes, others with dense rainforests and idyllic white sand beaches. Of great beauty and simple laidback charm, these are the most perfect islands I have ever visited. Located in the zone between Asia and Australia known as the Wallace line, the area has a rich collection of flora and fauna with brilliantly coloured birds including cockatoos, kingfishers and parrots, while underwater more than 60 percent of the world’s coral species are found here.

The Maluku islands were once the world’s only source of highly valued spices such as cloves, nutmeg and mace.  The scent and preservative power of these spices was the reason behind perilous voyages undertaken by the Chinese, the earliest recorded spice traders, followed by Arabs and centuries later by Portuguese, British and Dutch explorers who discovered the route to the Spice Islands and fought to control the monopoly. In one extraordinary treaty in 1667, the British ceded sovereignty of the small island of Run to the Dutch in exchange for the island of Manhattan, so avid was the European demand for spices. Crumbling forts bear testimony to the struggles of the Portuguese in the 16th century and the Dutch and British in the 17th century, to control the spice trade. In 1621, in a brutal show of strength at the direction of the Dutch East India Company, 44 leaders from the islands of Banda were executed and many Bandanese were exiled or sold into slavery. Of 15,000, only 1,000 remained, an insufficient number to work in the plantations. The Dutch brought in indentured labour from Timor, Borneo and Java, and the current population now reflects a mix of ethnic backgrounds and languages.

Divided into two provinces since 1999, the capital of the predominantly Christian Maluku is Ambon, while the capital of North Maluku, Ternate is predominantly Muslim. Discovered by the Portuguese in 1529, Ambon stretches along a crescent shaped harbour with cafes, mosques, churches, a busy market, historic forts and a Commonwealth War Cemetery in honour of the Allied servicemen who died here during WWII.

It was at Ambon that I met the other 16 passengers – British, Canadian, Australian, Dutch and German, our guides Jennifer and Ari, and our Indonesian crew. There is something about cruising on a small ship in the tropics that encourages congeniality amongst passengers and the discarding of inhibitions. Dick was the first to succumb.  With that distinctive scent of clove, I found him smoking a Kretek cigarette. “Not bad”, he said and with a crew who laughed and sang a lot, it wasn’t long before we danced the pogo and limbo each evening, with unrestrained enthusiasm.

At Run, curious onlookers followed us to visit a centuries-old plantation where nutmeg is gathered using a basket tied to a long bamboo pole. These nutmeg trees are shaded by tall kenari trees that provide a protective canopy, and are now more valuable than the trees they shade. Our perfect day ended with scoops of homemade strawberry ice cream topped with fresh kenari nuts.

About half of the archipelago’s population lives on the small island of Banda Neira, a sleepy, relaxed locale with spectacular views across the strait to a volcano. We walked along a street lined with the once grand homes of Dutch planters, including the delightful Delfika Guesthouse, with deep porticoes and colonnades made from ornamental cast iron. We visited a Dutch Reform Church built in 1859 and the stately former Dutch Governor’s residence built across from the village green littered with cannons. At Fort Belgica built in 1611, young women danced a nutmeg dance in step to loud percussion music. We enjoyed a spectacular departure through the straits, two Kora Kora or traditional war canoes escorting us rowed with determination by men to the rhythm of a gong and drum.

At remote Pulau Ai, set in a sheltered bay of white sand that offers superb snorkelling, I met Ayem, the owner of the Green Coconut Home stay who handed me his business card that read, ‘See you later, alligator? Why not, coconut’. When I asked if he had visitors here, he replied somewhat indignantly, “Of course, why not!”

We next set sail for Saparau with a pod of dolphins swimming alongside, where we visited a sago plantation, a Dutch fort and drove around the island with Dick giving away his beloved hat to a local woman who kept pointing at it. And so the days rolled by visiting remote islands, all quite unique, and watching spectacular sunsets that turned the sky brilliant shades of orange, purple and red. Late into the night I would sometimes lie at the ship’s bow to gaze upwards at a sky filled with stars.

At Manipa we visited a school where we were greeted with shy, but inquisitive children. Ari dispensed books and pencils and we gave an impromptu performance of ‘Kookaburra sits in the old Gum tree’. The children escorted us shouting loud goodbyes and waving frantically from the jetty, the island so remote that they may not see another foreigner for a year or more.

When we arrived at the equator, one of the crew nicknamed ‘Hollywood John’ demonstrated considerable bravado by climbing the rigging and diving from a dizzying height into the water, with others following by leaping off the side to celebrate our arrival. And then under a blue expanse of canvas, the Ombuk Putih set sail.

Almost 500 kilometres north of Ambon lie the volcanic islands of Tidore and Ternate, once the world’s only source of cloves, with many reminders of an exotic past, Portuguese and Dutch forts, mosques, Sultan’s palaces and stilted timber houses painted in bold colours with rusty corrugated iron roofs. At charming Tidore we visited two forts and travelled by auto-rickshaw to the market. But our remarkable journey was coming to an end, and in Ternate we were overwhelmed to find ourselves in a busy city once more.

The Spice Islands offer unique cultures, fascinating histories, and divergent geographies for those prepared to venture to this diverse, but decidedly remote region with a horizon that is infinite and blue.

Entry requirements: Check beforehand – a visa is required on entry to Indonesia for US$25 for Australian passport holders.

Where to stay: Given the challenges of getting there, consider a stay pre or post at the Mandarin Oriental Kuala Lumpur, one of Asia’s finest hotels W: mandarinoriental.com or in Bali, the Legian offers a tranquil garden setting W: ghmhotels.com or Raja Gardens is a budget choice offering Balinese style bungalows E: jdw@eksadata.com

Getting around:  Sea Trek Bali offers several itineraries. Cabins are compact yet comfortable, with built-in drawers and en-suite bathrooms. The Indonesian food is excellent using freshly sourced ingredients. For bookings/inquiries contact info@seatrekbali.com, W: seatrekbali and watch the videos at http://vimeo.com/87149955

April to early June and October to early December.

Insider tip: A few tee shirts, shorts, sarong, hat, swimmers, book and sunscreen. Carry on is recommended to keep a watchful eye on your belongings.