Going the distance in WA 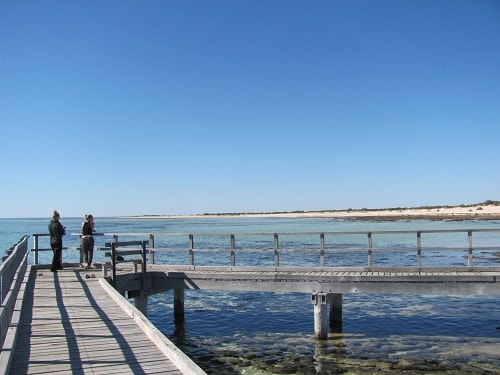 Eddy was reeling in his fishing line. His catch of a prized mulloway was ample for dinner for him and his friends. He would stay put, fishing for the next few months, moving on only when he felt like it. “I gave up wearing a watch years ago,” he said, shaking his suntanned arm for effect. That day he’d seen a passing parade of reef sharks, blue nose tuna, dolphins, stingrays and humpback whales.

I was at 80 Mile Beach, 365 kilometres south of Broome in Western Australia where our coach had stopped for a break, the first of many on an overland tour stretching from Broome to Perth, a distance of 3081 kilometres.
Once a remote outpost, Broome has retained an exotic mix of influences from Chinese, Japanese and Filipino divers who came to dive for pearls when the town became a pearling port more than 100 years ago and stayed.
Leaving the historic pearling masters cottages and flowering frangipani behind, I joined eight other travellers from Japan, Taiwan, Canada, France, Italy and the UK. Soon we were barrelling along a straight smooth highway, with a parched desert landscape of scrub and termite mounds shaped like giant upturned ice-cream cones to our left and a brilliant blue coastline to our right.

Our journey had all the makings of an epic road trip on the Great Northern Highway that was much emptier than I’d imagined. Drivers waved as they drove by, a sure sign that they hadn’t seen anything but spinifex and kangaroos in hours. Between roadhouses spread several hundred kilometres apart, there were few signs of human habitation. At the first roadhouse we stopped at, the Sandfire, there were several dust caked road trains spanning 120 metres in length, and campervans driven by ‘grey nomads’ who take to the road indefinitely.

Leaving early the next morning, we left the coast behind heading inland to arrive after dark at Karijini National Park, the night sky brilliantly showing the stars of the Southern Cross.
For the next two days we immersed ourselves in the spectacular landscape, swimming in refreshing pools fed by waterfalls and tackling some challenging walks, shunting through narrow openings into the wide expanses of sheer sided gorges with towering red and crimson cliffs on either side, the deep river canyons cutting through the parched desert. The banded iron formations exposed in many of the rocks are some of earth’s oldest having originated more than 2500 million years ago.

The Banyjima, Yinhawangka and Kurrama Aboriginals know this area as Karijini, meaning “hilly place”, comprising 627,441 hectares of mountains and escarpments that rise up from the flat, arid plateau covered with spinifex and eucalypts and a multitude of wildflowers. Colour is everywhere from pink myrtle, golden wattle and purple mulla mullas.

After exploring Karijini we headed back to the coast to Exmouth at the northern tip of World Heritage listed Ningaloo Reef. Stretching for 260 kilometres along a largely uninhabited coastline, the reef is one of the world’s most biologically diverse marine environments. It is also the world’s closest coral reef to a land mass beginning just metres from the beach. We swam in the crystal blue waters of Turquoise Bay adrift with a technicolour array of fish – 520 species are found here including green and purple parrot fish, striped clown fish, butterfly fish, giant square headed mahi-mahi and schools of tiny blue fish that darted by.

I then went for a stroll along the brilliant white sand beach before we departed in the late afternoon, driving on into the night to arrive at the southern end of Ningaloo Reef at the small settlement of Coral Bay.
The next day I joined Jess from Ningaloo Reef Dive and Snorkel for a boat trip to three dive sites. The world below was a barrage of colour with fish circling the first mound of coral we came to, then alongside came two inquisitive loggerhead turtles. We explored more coral before Jess motioned. A black tip reef shark was circling, though on sensing our presence it shot away with a muscular flick of its tail. Our final dive was with huge manta rays, the outline of their black shadows deep below.
The drive to Monkey Mia took us past an arid, red landscape of acacias and flowering grevilleas. At a clifftop lookout we saw pods of dolphins below and the trip suddenly seemed overwhelming, the distances so great.

In 1616, Dirk Hartog left a plate on an island near Shark Bay inscribed with the details of his journey, the first record of a European landing on Australia. In 1699, William Dampier named the area Shark Bay, though the area is better known for dugongs, turtles and dolphins.
Now a World Heritage site, our first stop at Shark Bay, was Shell Beach, a blindingly white beach created from hundreds of millions of crushed cockle shells, thought to be up to 4000 years old, extending for 120 kilometres along the coastline.

Shark Bay’s most reliable year-round tourist attraction was ready to greet us on cue the morning after we arrived. In the early 1960s a pod of bottle nosed dolphins began what has become a ritual, every day swimming into the clear shallows of the bay to interact with humans. At Monkey Mia, four dolphins frolicked impatiently behind the ranger, approaching her to take a fish in turn while peering at us with one eye out of the water.
Heading further south we passed Kalbarri, New Norcia and Northhampton, with wheat and bright yellow canola fields before the landscape turned to arid scrubland once more.
The renowned Pinnacles are spiky limestone rock formations that rise up to five metres high out of a yellow, sandy desert landscape formed thousands of years ago.

As we sped along the freeway to Perth, shimmering postmodern skyscrapers rising from the flatlands came into view. Australia’s largest state of red dust, white sandy beaches and a brilliant turquoise coloured coastline is untamed, wild and vast. I grabbed my bag and walked off into the night. The journey had come to an end.

Fact file
Getting around
Qantas flies direct to Broome from Sydney and Melbourne during peak season and has frequent departures from Perth.
Intrepid Travel is a small group adventure travel company. The 10-day Broome to Perth trip is a great way to cover a vast and remote part of Australia. W: www.intrepidtravel.com
Enjoy a great day on the reef with Ningaloo Reef Dive and Snorkel, Coral Bay. W: www.ningalooreefdive.com
Where to stay
The Cable Beach Club Resort in Broome offers stunning views of Cable Beach in a lush tropical garden setting W: www.cablebeachclub.com
In Perth, the Ibis Hotel is functional and centrally located. W: accorhotels.com.au
The best time to view whale sharks is from March to August and for humpback whales between June and November.
More information:
Department of Parks and Wildlife W: www.dpaw.wa.gov.au
Tourism Western Australia W: www.westernaustralia.com