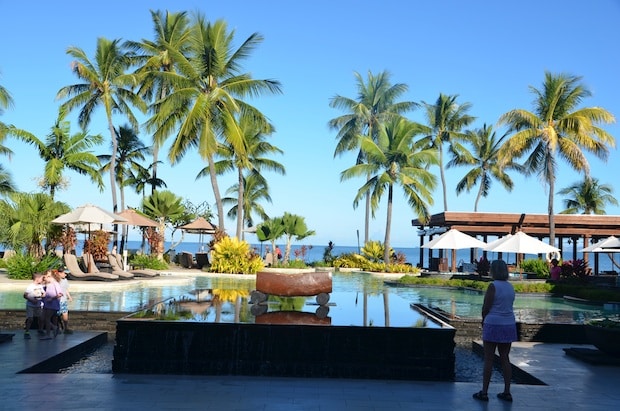 Reading Time: 5 minutesMore than just an island paradise, Fiji has something for everyone

Located in the heart of the South Pacific, around 3150 kilometres northeast of Sydney, wondrous Fiji is an archipelago comprising of over 330 islands. Viti Levu and Vanua Levu are the two largest where 95 per cent of Fiji’s 900,000 people live. Nadi, on the west coast of Viti Levu, is the nation’s main international gateway, while Suva, dotted on the same island’s south-east corner, is the capital. Often touted as a ‘travellers hideout par excellence’, this paradise-like destination offers a dramatic array of landforms and seascapes all concentrated in a relatively small area. Those who touch its shore unanimously stamp its sun drenched beaches, lush rainforests edging rolling hills and wide spectrum of coral reefs as truly superlative.

Tourism is obviously one of the top revenue earners of Fiji, and during a recent visit here I discovered that it’s a place of choices, offering something unique from its menu to cater for the varied tastes and likings of visitors from different parts of the world.

Do nothing and just relax

Many go to Fiji just to relax and recharge their batteries, and the destination rewards them aptly. The soothing effects of nature, the serenity of the engulfing atmosphere, the idyllic seafront locations where most of the hotels and resorts are nestled, and the welcoming attitude of local Fijians acts as a tonic to rejuvenate the urbanised mind, body and soul. Doing nothing is a great option for some holidaymakers. They really do nothing but eat, drink, read a book and intermittently look at the turquoise blue ocean, from sunrise through to the twilight as the sun vanishes into the horizon.
If bored, they may go for a walk along the water or for a dip into the pool. Some join others for a game of beach volleyball or tennis. Fresh air, and a friendly atmosphere free from vendors and touts as seen in other similar spots like Phuket or Bali, and warm hospitality at the resorts – filled with all sorts of contemporary facilities – soon makes them forget which day of the week it is. Fiji is extremely popular to holiday with young kids as loving attendants at the resorts take good care of the children while parents wind down.

Have an adventurous affair with sea and sand

To some a vacation in Fiji means an adrenalin rushing affair with sea and sand. They fancy water sports like parasailing, waterskiing, surfing and kayaking, while snorkelers and scuba divers jump into the water for an awesome experience of underwater scenery dominated by colourful marine life and dazzling coral reefs. Fiji claims more than quarter of the South Pacific’s so called ‘rainforest of the sea’. Viti Levu Island is blessed with awesome reef sites which provide underwater swimmers the ecstatic joys of experiencing one of the most exotic gifts of nature. If someone is inexperienced, expert divers from the resorts or tour companies are always available to help so that the interested doesn’t miss out on the experience.

A visit to Fiji remains incomplete until you dig into some of their long-standing traditions and customs which form part of their ancestral culture. Among several, perhaps the two most significant ones are the “Yaqona” ritual, which is the ceremonial preparation of a non alcoholic but intoxicating drink called “Cava”, and drinking with guests, family and friends and the “Lovo” feast where meat and vegetables are cooked in an underground oven. Both the ceremonies in their full colourful form and scale can best be experienced in a village during a festival. However, most resorts organise social “Cava” drinking and serve some kind of “Lovo”- style meals for guests to sample their rich cultural heritage. Like at most resorts, in the evenings they also host traditional singing and dancing including fire walking, where Fijian men walk on red hot stones, demonstrating their strong physical power.

All the above can be well experienced by taking part in a couple of nights cruising as offered by Blue Line Cruises aboard their small boutique ship “Fiji Princess”. After departing from Denarau Island, Fiji’s top class resort hub near Nadi town, guests soon gets lost in a magical world on board where there is nothing under the deep blue sky but series of isolated, lush-green-rainforest covered islands surrounded by golden-yellow sand bordering the sea with stunning mountain ranges as the backdrop. The spectacular colour combination of blue, green and yellow soothes urban eyes and relaxes the mind. Stops at a few islands, some totally uninhabited, some housing one or two Fijian villages, provides the opportunity to experience simple lifestyle elements. Brooke Shields comes to mind when around the islands where the famous Blue Lagoon movie was filmed.

When visitors want a break from sand, sea and sun, a tour of the Little India quarters in Nadi and Lautoka becomes an encouraging option. Subsequent to Fiji becoming a British colony in 1874, Indians were brought in to work as indentured labourers in the British and Australian owned sugar industry. The first batch of 450 landed in 1879, and the last in 1916. By then the Indian population had grown to around 63,000. To work in Fiji, the Indians then had to sign a contract called “girmt”, committing their services at the master’s farm for the first five years, followed by another five years of farming on their own on small plots of land leased from local Fijians. After ten years they were made free. However, by then most of them had become accustomed to the local climate and culture, and decided to stay. The indenture system was terminated in 1920, but the number of Indians kept soaring due to the later arrivals of Gujarati and Sikh business people. Today descendants of first generation Indian migrants constitute around 38 per cent of Fiji’s population, though during the 1946 census Indians marginally outnumbered the indigenous people.

The Indian settlements mushroomed around sugarcane farms and mills around Nadi and the nearby town of Lautoka, by virtue of which both these quarters display extensive Indian characters which can make visiting Indians feel home sick. Wandering here you notice men wearing kurtas and women attired in sari or salwar kameez, you hear people speaking Bhojpuri-type Hindi, smell the aroma of curries, can eat hot samosas and pakoras, and walk past shops selling Bollywood DVDs. At times it feels like you are roaming in a regional town in Bihar or Uttar Pradesh. Adding to the panorama are several temples, mosques and gurdwaras, the most important being the Siva Subrahmaniya Swami Temple, the ornamented gate of which dominates Nadi’s landscape.

Getting There
Fiji Airways (www.fijiairways.com), Jetstar (www.jetstar.com) and Virgin Australia (www.virginaustralia.com) have regular flights to Nadi

Indian Cuisine
There are several Indian restaurants throughout Fiji for those who fancy desi food; Indigo (www.indigofiji.com) at Denarau Island is highly rated