Scintillating Srikanth smashes it in Sydney 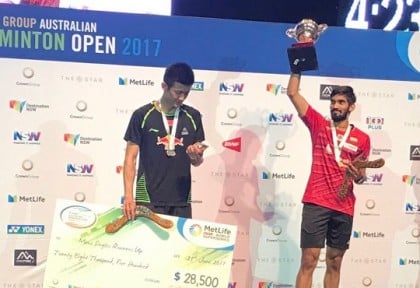 Indian badminton’s exciting talent follows up his win in Indonesia with another one in Australia, writes YOGENDRA BHATNAGAR

He had the poise of a yogi, precision of an artist, cunning of a chess player and aggression of a warrior.
Indian badminton sensation Kidambi Srikanth overwhelmed the reigning world and Olympic champion, Chen Long of China, in the prestigious Australian Open in Sydney on 25 June.

Srikanth was at his clinical best as he dispatched his more fancied opponent in straight games with a score line of 22-20, 21-16, to claim the title, his second in quick succession after his triumph in the Indonesian Open Premier at Jakarta on 18 June.
Sydney has been a happy hunting ground for Indians with Saina Nehwal winning the women’s singles crown in 2014 and 2016.
Hallmark of a champion
The Australian Open had a star-studded line-up, but Srikanth wasn’t one of them, certainly not at the start of the tournament. In fact, he was unseeded when the Australian Open began. But, with his stunning display of skill, grit and determination, he set the badminton world alight with a breathtaking exhibition of stroke play.
This was the 4th BWF Super Series title for the 24-year-old from Ravulapalem, Andhra Pradesh, who started off his professional career in 2008. At the peak of his career in 2015, Srikanth was ranked World No 3. The Hyderabad-based shuttler, who trains at the Gopichand Academy, had made headlines first in 2014 when he won the China Open Super Series tournament against former World No. 1 and two-time Olympic champion Lin Dan (21-19, 21-17) in a historic upset.

He made it to the semi-finals of the Australian Open Super Series in 2016 and then backed it up with a quarter-final finish at the 2016 Rio Games where he stretched Lin Dan to three tight games. He had since slipped a few places due to a stress fracture induced break and currently occupies the 11th position in the World Men’s Singles Ranking which no doubt will improve further after Sydney success when the new rankings are released on 30 June 2017.  Incidentally, Srikanth is ranked number 2 in Destination Dubai World Ranking towards the season ending Super Series Finals in Dubai.
Srikanth joined Indonesia’s Sony Kuncoro, Malaysia’s Lee Chong Wei, and the Chinese duo of Chen Long and Lin Dan to become only the fifth player in the world to have featured in three successive Super Series finals. What makes the achievement even more special is the fact that Srikanth won the last two tournaments, a perfect preparation and huge boost for the forthcoming World Championships in Glasgow in August.
Flawless performance in Sydney
The badminton stadium at the picturesque Sydney Olympic Park on the cold wintry morning of 25 June 2017, was packed with thousands of Chinese supporters. However, a handful of vociferous Indians, waving the Indian tricolour and chanting constantly – ‘Jeetega bhai jeetega, India jeetega’ (India will win) – provided crucial moral support to Srikanth.
Undeterred by the 0-5 loss record against Chen Long, Srikanth pinned Chen to the back of the court and kept things tight until he chose his moment to attack. His shuttle control, exceptional net play and piercing smashes brought the lanky Chinese down to his knees in utter disbelief.

“I was prepared for a long match and determined not to make simple mistakes and allow Chen Long take control,” he said in an informal chat after the match. While his performance was spectacular, his heartfelt gesture at the end of the match was even more special. After thanking his Indonesian coach Mulyo Handoyo, who also was beaming with joy, Srikanth ran onto the other side of court to hug Chen Long, exhibiting sportsman spirit, the sign of a true champion.
Moments after Srikanth’s win and amongst the euphoric celebrations by Indian spectators, an ardent Indian badminton fan, Malvika, who travelled especially from Hisar, India, to witness the Australian Open, was almost in tears. “I was expecting Saina or Sindhu to win here. Srikanth brought tears in my eyes when he stepped on the podium to receive the trophy. It was a dream come true,” she said.
Preparing for world championships
Srikanth, who returned to India on 27 June after bagging the Indonesian and Australian Open titles, said his focus is on the World Championship in the coming six weeks and he would not play any other tournament.
Proudly displaying the medals, the World No. 11 said the last two weeks have been fantastic for Indian badminton.

He also thanked India’s chief national coach Pullela Gopichand, his other coaches and the physio for his success. “My special thanks to Gopi sir. Without him I would not have been here for sure. I can’t imagine playing badminton at this level without him,” said the 24-year-old.
Srikanth, along with two other shuttlers HS Prannoy and Sai Praneeth, was felicitated by Gopichand Badminton Academy and Hyderabad District Badminton Association president Chamundeswarnath.
“These two weeks were fantastic not just for me but also for Prannoy and Sai. It was an unfortunate semi-final for Prannoy at the Indonesian Open. I would have loved to play the final with him,” said Srikanth.
Prannoy shocked defending champion Lee Chong Wei of Malaysia in the pre-quarterfinal and defeated Chen Long in the quarter-final but went down fighting to Japan’s Kazumasa Sakai in the semi-final.


Earlier, Srikanth landed to a rousing reception from family and friends. Proud parents Krishna Mohan and Radha Mukunda hugged their son, flanked by a host of relatives and friends, who had turned up to receive the Guntur lad.
A promising future
Is Srikanth going to be a better badminton player than the legendary Prakash Padukone? Having won 4 Super Series titles already in the much more fierce competition in the present era, many would say he is the finest male player India has produced.
If his achievements are signs of things to come, Indian fans can brace themselves for even more laurels in the coming months from Srikanth.
With IANS reports
Rising Star Kidambi Srikanth
- Advertisement -
Share
WhatsApp
Facebook
Twitter
Linkedin
Previous articleA ‘conditions apply’ future for emerging India
Next articleHealing hands for troubled eyes