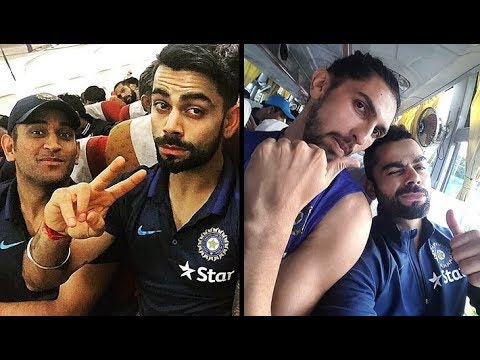 Going into the World Cup, the Indian cricket team management was keen to travel to different cities in England by train, not only because it saves time, but also because it’s less tiring on the players. While their plea didn’t cut ice with the International Cricket Council (ICC) and the Indian players have been travelling on bus, they have turned it into a classroom for the players.
According to sources, the team management felt that it was apt to use the time travelling from one city to another by discussing strategies with players.
“You can call it the class on wheels actually. While there is the share of fun and jokes and chilling, the support staff sometimes uses this time to discuss strategies with the players and also address certain areas which they feel a player is struggling with. Nothing majorly serious, this is more about pep talks and discussions to clear the mind,” the source explained.

Even the English Premier League sides use the trains, but the ICC has continued to insist that the cricket teams travel by bus.
“Intercity travel is still being done in buses whereas football teams in the EPL have moved onto trains for travel as it saves time,” the source pointed.
The Indian team travelled from Birmingham to Leeds on Wednesday, and while the bus journey took close to five hours, the same could have been completed by train in less than two hours.
The cumbersome travel style not withstanding, India have been on a roll in this edition of the tournament and have lost only one game so far, against England at Edgbaston on Sunday. But more than the one loss, it is the conviction with which the players have expressed themselves in the middle that has impressed all.
There are wins and then there are convincing victories and this team has registered thumping wins and shown why they’re one of the top-ranked ODI teams at present.
While they have a couple of days to go before they play their last group game against Sri Lanka on Saturday, the Men in Blue qualified for the semis after beating Bangladesh in their previous group game at the Edgbaston Cricket Ground.
IANS