The renowned playback singer enthrals her fans and adds to the excitement of Holi, reports PREETI JABBAL 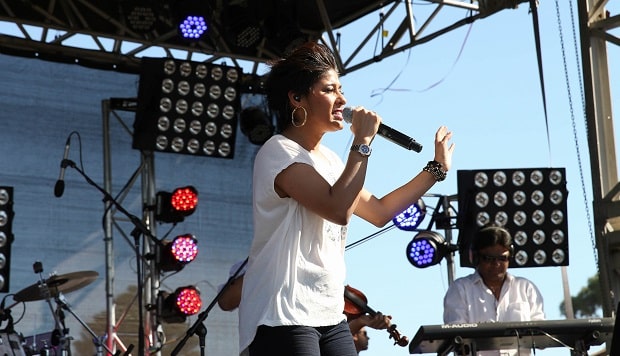 Recently on a Sunday afternoon, hundreds of Sunidhi Chauhan fans from all parts of Melbourne descended upon Werribee Racecourse to enjoy the Holi Mela and to listen to their favourite playback singer. With her ability to electrify a hall from front pews to back, Sunidhi was at her dynamic best on the open stage that was created for Holi revellers by the organisers Sizzlin Events.

Sunidhi’s power packed performance is designed for spaces beyond walls and chairs and the famous, multi-award winning playback singer was able to galvanise the audience with her extraordinary stage presence. It was difficult to sit there and simply tap one’s feet as Sunidhi’s effervescence had the ability to stir all music fans. The undisputed queen of Bollywood item numbers engaged the crowd into high spirits whilst belting out hits like Kamli, Sheela and Beedi, among others.

In the swarm of new and old playback singers in India, Sunidhi has carved a niche for herself with her impressive voice and ability to express volubly in both Hindi and English. In addition to her continued successes in Bollywood, Sunidhi has collaborated with pop-star Enrique Iglesias on his song Heartbeat (India Mix) which featured on his album Euphoria (special Indian edition). She was also the only Indian artist asked to be a part of the Western Union World of Betters campaign in collaboration with international recording artists Alicia Keys, K’Naan, (John Legend and Pitbull).

You could see why people were prepared to drive all the way to Werribee to revel not only in the festival of colours, but to relish the acoustic treat offered by Sunidhi and her live band. “If only the show had gone on for a little longer and it could have started a little earlier”, commented one of the VIP ticket holders as a beautiful black Porsche whisked the singer away.

This probably was the first time that Holi was being held at this venue and a free bus shuttle service was on offer to take people to and fro. There were plenty of food stalls and treats to tuck into, along with stalls from service providers, media outlets and financial services. It may not have met the claim of being the biggest Holi Mela in Melbourne; however it sure met the criteria for being one of the best, thanks mainly to Sunidhi Chauhan’s crowd-engaging performance.

$16 million for Friends of The Children