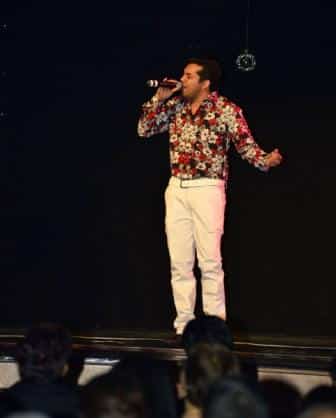 Watch on old recording of Mohammed Rafi singing, and you will be blown away by how effortless he makes it all seem. Suhaani raat dhal chuki… An easy smile plays on his lips and his eyelids close in bliss.

On a Sydney stage recently, Idea Star singer Zia-Ul-Haq channeled his idol beautifully as he belted out some of the evergreen hits of one of Bollywood’s best-known playback singers.

The occasion was Soorya Australia’s Pranamam 2, a tribute to the legend, the late Padmashree Mohammed Rafi, held at C3 Conference Venue in Sydney suburb Silverwater.

With Sheela Subramani backing him up on female vocals, the ever-smiling Zia transported the audience back to another era when the lyrics mattered as much as the music. Hits such as Chahoonga mein tujhe (Dosti) and Mann re tu kahe na dheer (Chitralekha) won the listeners over. Rafi’s masterpiece O duniya ke rakhwale (Baiju Bawara), under the direction of the maestro Naushad, must surely be the test of any singer that covers Rafi: here, Zia came out with flying colours, faithfully bringing out the angst as the poet questions God on why he fills the world with sad things. And yet, after appropriately demonstrating his skill, Zia cleverly moved on to a happier mood, with numbers such as Tere mere sapne (Guide), Chaudhvin ka chand from the film of the same name, Deewana hua badal (Kashmir Ki Kali) and Jo wada kiya woh (Taj Mahal).

Most of the songs also depicted the movie clip on screen. This technology helps the younger generation in the audience who have not witnessed some of these masterpieces to appreciate the music of a bygone era.

The delightful event also saw Sydney Malayalee Association partner with Soorya Australia to bring together various linguistic communities of India through not only music but also dance.

A special feature was Samudra Nadanam, a new dance form created by two young dancers from Kerala. Gopi Madhusoodanan and Sajeev Purushothaman combine elements of martial arts with traditional dance in their unique creation. After going through a difficult patch, they are now gaining acclaim for their particular art, having performed in many countries, choreographed award winning dances in movies, even winning a national award.

Kathak dancers Sonia Gupta and Bharati Dang performed in their own style as well. Rajendrakumar Gangani’s magical foot work, also in Kathak format, was a feast to the eyes and brought joy to the heart.

All six artistes had earlier come together on stage to perform a prayer dance to start off with, but the highlight of the evening was surely their ‘second coming’, where all the six artists together performed to classical vocal and culminated in the song O dunia ke rakhwale. This beautifully coordinated presentation brought he house down, with the audience screaming for more.

The program was conceived, designed and directed by Soorya Krishnamoorthy, the founder-director of the Soorya Stage and Film Society based in Thiruvananthapuram, India. It promotes Indian arts and culture and is now renowned for organising the Soorya Festival – the longest and one of the most prestigious cultural events in India.  In recognition, he has been decorated with many awards including President of India’s National Award for Stage Craft and Direction.

Sudhir Das of Soorya Sydney thanked all involved including the audience which included many dignitaries who presented themselves on a weekday for the performance, and the main sponsors State Bank of India and Indian Tourism. The young and lively Swetha Das acted as MC for the evening.

Shattering stereotypes – or endorsing them?