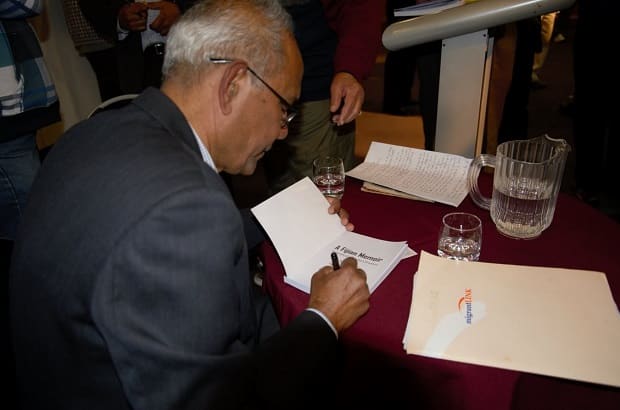 A crowd of more than 200 Fiji Indian Sydneysiders took an emotional trip back to Fiji when they converged at the Blacktown City Library recently for the launch of Pratap Chand’s book, A Fijian Memoir: Footprints of a Girmitya’s Grandson.

Chand, a former education minister in Fiji’s Labour Government and a schoolteacher turned trade unionist, recollected the living experiences of village life amid the perils of dire poverty. Through 15 chapters of his book he presented the carefree spirit of the Fiji Indians, their resourcefulness, capacity to share, celebrate and mourn together, and their value for education.

Brij Lal, Professor of Pacific and Asian History and director of the School of Culture, History and Language at the Australian National University, launched the book amid much pomp and ceremony.

Speaking at the launch, Pratap Chand said the book was his first attempt at ‘writing by remembering’. The project took him a few years to complete as he had to shift priorities, especially when his wife became ill. “I also took time away from the project to care for and raise my grandchildren,” he said.

Chand said he was grateful to his ‘teacher colleagues’, trade union supporters as well as those who believed in his work ethics when he was a government minister in Fiji. Apart from family and friends, the largest support for the launch was from former teachers from Fiji, most of who either worked with Chand or served under him when he was a minister. Roshan Lal, formerly of Waibuka, Ba who attended the event said that he remembered the leading role Chand played in ensuring children attended school.

“We always wanted to do the right thing as students because kaka (uncle) would always question us about our progress at school. We used to be scared when mum would tell us about his visits to our village,” he stated.

Chand recalled how he would travel to villages in the outback where the Fijian communities would lay the red carpet for his welcome. “These villages could not afford much but they would put on a grand show because a government minister was coming to their village. I took pride in serving these villages through better education for their children,” he stated.

Chand said he remembered his own childhood in Fiji as being filled with adventure and fun. He said although they had very little, the Indians in Fiji always worked hard and reached out to help those within their networks. “The Indian community was focused on education and we as a community in Sydney today are benefiting from that investment,” he said.

Prof Lal, a living testament of the power of education, was then invited to launch the book which was sold out on the day,

Reminiscing on the life that was, Prof Lal, himself a son of Fiji who has attended international forays as a voice on Fiji’s history and politics, said the book was an archive of memories of a world disappearing before our eyes.

Touching on the fundamental demographic change that has reshaped Fiji since the 1987 military coup, Prof Lal said that in the 1970s Indians comprised around 50 per cent of the country’s population. “They were the outright majority of the population, with all the fears and phobias that that generated. But now their numbers have declined to around 32 per cent, and going further down, while the iTaukei (indigenous Fijians) now are around 60 per cent of the population”.

Prof Lal predicted that with the changing shifts in the centre of gravity, a time will come when people will find it difficult to believe that Indians were once a majority in Fiji.

He lamented, “The best and brightest have left; those still in Fiji would leave if they could. Now, Sydney, Melbourne, Brisbane, Auckland, Wellington and Vancouver are the new beacon of our people”.

Pointing to these ‘massive’ changes and transformations, Prof Lal called on the audience to pen their own memoirs. “If we don’t write about ourselves, who we are, where we have come from, our hopes and aspirations and fears; who will?” he stated.

Presenting the essence of the book which he initially read in its embryonic form almost a year ago, Prof Lal said at its most basic level the book presented the story of a personal journey; the story of a boy growing up in pre-modern times, without electricity or running water, reading by the flickering wick lamp in the silence of a thatched bure, completing primary school and through sheer effort and determination completing university education and making forays into public life.

“In the course of telling his story, Pratap makes a vanished world come alive. He writes about games children played in the village (gullidanda, suri and hopscotch), about festivals that celebrated life, and the rituals and ceremonies that mourned its passing,” Prof Lal said.

The close-knit communal life that Chand described and celebrated in his book was typical of Indo-Fijian villages all around the country. This life, however, has disappeared in many places as cane leases have not been renewed and evicted tenants have drifted to the mushrooming squatter settlements fringing urban centres all around Fiji, where between 15 to 20 per cent of the total population lives.

“The book is in a very real sense, Pratap’s tribute to that vanishing world that so formed and deformed our lives.  Pratap uses his personal experience to reflect the broader forces and influences of history and the processes of social change of which he has been a part, of which he is a product,” he stated.

Prof Lal explored Chand’s antecedents, explain the concepts of girmitiya, and girmit (indenture) in detail. He touched on Chand’s treatment of education, stating that it was written “with intimate familiarity, from the inside as a student, teacher and administrator”. He mentioned the changes in literature that had shaped Fijian education, citing examples from traditional English and Hindi readers. “Pratap is absolutely right to emphasise the centrality of education in our lives,” said Prof Lal.

The highlight of the launch was when Professor Lal showed the audience his own treasured collection of first books, to amazed applause as the majority of attendees had also read the same textbooks.

Prof Lal then enumerated on university education, as propounded by Chand in his book. He explained how opening of the University of the South Pacific in 1968 led to greater opportunities for higher education among the youth of Fiji. “Tertiary education was made available to children from poor homes who could not afford to go abroad. That was how I was able to go to university; that is how Pratap did. The USP was the central catalyst for the emergence of the Fijian middle class of which both us are a part,” he stated.

Chand plans to launch his book in Brisbane and Auckland before the end of this year. “I am waiting for more copies to be published,” he said.