Nearly 150 people gathered at the steps of the Victorian parliament in a peaceful protest against the horrendous attack in Kashmir’s Pulwana district. Organised by community volunteer Karthik Arasu, the group included many leading lights from Melbourne’s Indian community, men, women and children. They came armed with placards and the Indian flag, and many of them took to the microphone in tribute to the fallen soldiers.

Arasu himself called for an end to the violence and terrorism, emphasising that peace and love are what the Indian culture is all about. 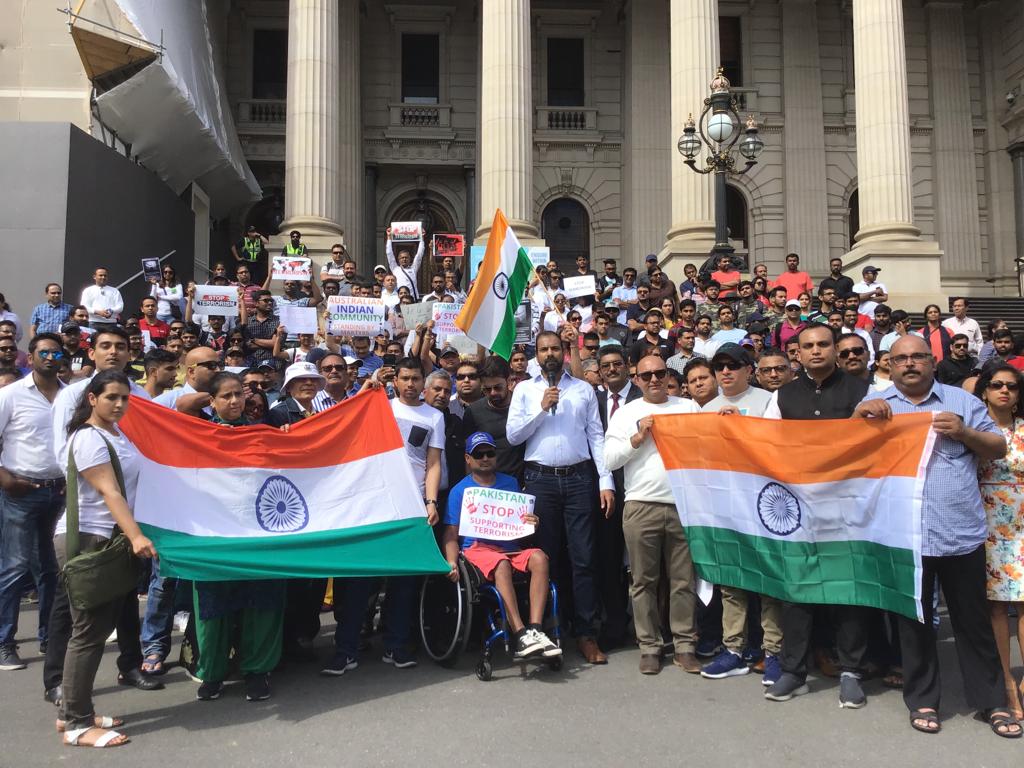 Speaking to Indian Link about how the event came to be organised, he said, “There was pain and anguish, as the news came through, and of course anger too. I wondered how we could register this sentiment, and show our solidarity with the nation. Coming together at the Victorian Parliament gave us an opportunity to vent and express our emotions to the world. I think we did that peacefully.”

Sentiments were running high – as they are even now – and everyone shared openly, in their own way. There was a bit of sloganeering, and calls for Indian Australians to contribute in whatever way they can. Arasu added, “Our main motto was to stop terrorism in any form.”

He revealed that there is some discussion about registering protest in front of the Pakistan consulate, but much careful thought is going into it. “Deliberations are ongoing at this very moment about whether such a step is required, and whether it is the right thing to do. Because we are all certain that the last thing we want to do, is to propagate hate.”

Below: Melbourne-based music group MELODY THEATRE presents a musical tribute to the fallen CRPF personnel in Kashmir. Written and composed by Dr Mohit Pandit, it stars Kunal Mehta, Namrata Trivedi and Mohit himself.

To make a donation to the martyred soldiers’ families, head to bharatkeveer.gov.in