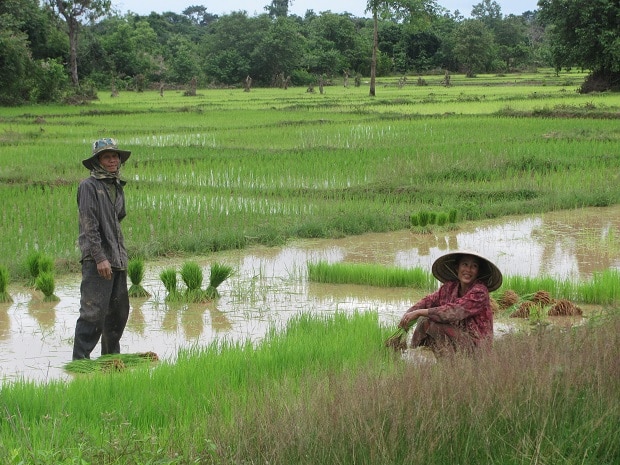 Bordered by golden temples, thatch-roofed villages, fertile fields of rice and dense jungle, we cruised slowly downstream on the Mekong river in Laos, passing fishermen casting their nets and children waving from the shoreline, with no bridges, just the occasional barge crossing slowly from one bank to the other. Here the river splits into several channels that wind their way around 4,000 islands, some large enough to be inhabited, others little more than clumps of trees. During the monsoon season, the Mekong is known for expanding to 14 kilometres wide.

I was in southern Laos, the least developed nation in South East Asia, travelling on the most charming of wooden river boats. The Vat Phou, spanning 34 metres long and 7.5 metres wide, originally carried teakwood before being converted into a comfortable riverboat with 12 cabins and an expansive upper deck with rattan chairs and day beds for viewing the passing scenery.

Over a heady espresso at the Sisouk Cafe in Pakse, I met our guide Khan and the other guests, a couple from Finland and family of 4 from Switzerland. The laidback small city of Pakse, capital of Champasak Province, sits at the confluence of the Mekong and Don rivers. We departed by long tailboat for an exhilarating ride until we reached the Vat Phou boat.

After a delicious lunch of Laotian dishes followed by coconut pudding, we clambered on board a tuk tuk and were transported along a muddy road to the Vat Phou temple ruins constructed between the 7th and 12th centuries, now a UNESCO World Heritage Site. Shaped to express the relationship between nature and humanity using an axis from the mountain to the banks of the Mekong, a geometric pattern of temples and shrines once extended over 10 kilometres. Climbing up steep stairs lined with flowering frangipani trees, a spectacular landscape unfolded beneath us, of two large artificial lakes and the vast plain beyond where once stood the ancient city, founded by King Mahendravarman who became ruler of the Khmer empire.

The Khmer empire once extended from Champasak to eastern Thailand, and south to the temples of Angkor in Cambodia. The historical significance of Vat Phou lies in its role as an imperial centre and its Indian influence is evident by signs of Hindu religious belief. The temples were built around a sacred spring piped into the temple’s sanctum that bathed its lingam, the emblem of the Hindu god Shiva. Other buildings were dedicated to Hindu deities, including Brahma and Vishnu. The complex later became a sanctuary for Theravada Buddhists. At the Angkor temples, throngs of tour groups surround you, but here there is almost no one to disturb quiet contemplation.

Next morning we moored near a small village known as Tomotha where life centres around rice cultivation and fishing, before venturing into the jungle to see the ruins of the mysterious Oum Moung temple built from the 13th to 14th century, now consisting of piles of stones and fallen lintels. The curious children who followed us were more interested in the large brightly coloured butterflies that hovered overhead.

Passing Don Daeng, one of islands in the middle of the Mekong where the river starts to widen, we saw several restaurants and upscale guesthouses, one of the few signs of change. Further on at Don Khon, we visited the old French railway opened in 1893 and the bridge linking the two islands.  When the French sought to transport arms and supplies on the Mekong to strengthen their control over Laos they came across an obstacle, a huge mass of water at the Pha Pheng waterfalls. Undeterred, they constructed a railway across the island to allow specially crafted boats to be disassembled, transported, then reassembled. The disused tracks can still be seen, together with the rusty remains of one of the steam locomotives and several crumbling French colonial buildings. These days it is a relaxing destination for backpackers travelling onwards to Cambodia, with rustic bungalows fitted with hammocks that dot the shoreline.

Our final excursion was to the Pha Pheng waterfalls, a semi-circular line of rocks over which the water tumbles down 30 metres with a deafening roar.

On our final night as we rounded a wide sweeping river bend, the moon began to rise above the jungle and the faraway tinkling of temple bells coming from a nearby village could be heard. I asked Khan what he loved most about life in Laos. He paused for a moment and then replied that it was his farm, his family and his water buffaloes.

Just ten kilometres further south was the border with Cambodia. Next morning after watching a spectacular sunrise, I headed north to Pakse and Khan returned to his farm. The main reason I’d come to southern Laos was to cruise on the Mekong, a river that I find captivating and return to year after year. Over the course of three days I saw it in all its colours – dark brown, grey and silvery blue, and I was able to observe life spent on the land. Laos has long been the small sleepy neighbour of Thailand and Vietnam that is waiting to be discovered.

Getting there: There are several options for arriving in Pakse. Thai Airways International and Air Asia fly from Australia to Bangkok with onward connections to Ubon Ratchathani, a 3 hour bus ride from Pakse. Several airlines fly to Vientiane, from where you can take an overnight VIP bus. Lao Airlines flies to Pakse from Ho Chi Minh City, Bangkok and Siem Riep.

Getting around: While the 4,000 islands can be accessed by road, a much more pleasant way is by boat. Highly recommended is the Vat Phou with 12 comfortable cabins with ensuite bathrooms. W: www.vatphou.com

Where to stay: In Pakse, the centrally located Residence Sisouk is a charming, boutique hotel overlooking the Mekong. The breakfast with jams, freshly baked bread and strong locally grown coffee was a delight. W: www.residence-sisouk.com E: hotel@residence-sisouk.com

Insider’s tip: The money-changer near the monument bookshop in Pakse has the best rate of exchange. Thai Baht or US dollars give the best rate. Treat yourself to a pressure point massage at Dok Champa Massage opposite the Pakse Hotel. A visa is required for entry into Laos. W: www.laoembassy.net E: laoemb@bigpond.net.au. Carry a fleece top as it gets cool on the river. November to April is the best time for a Mekong cruise.

Say ‘I Do’ at these Stunning Celebrity Wedding Destinations