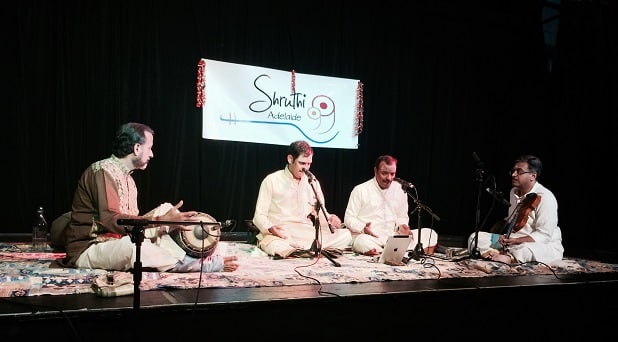 After a drought of almost two years, Indian classical music lovers of Adelaide were treated to a top deck concert on the last day of autumn by the renowned Malladi Brothers.

The event was presented by Shruthi, the only organisation to cater for the aficionados of carnatic music in this Festival City.

Weatherwise too, at the close of the warmest May on record, rain god Varuna came down in time as if not to miss the mesmerising music of the Malladis. It was a record crowd as well at the Nexus Multicultural Centre, an unusual venue for this kind of event. It is a cabaret space with restaurant style seating with professional lighting for stage plays, bar and kitchen facilities. For the Indian programme the seating was modified and the bar was cordoned off.

Perhaps for the first time this venue, accustomed to hearing western drums, would have reverberated to mridangam beats. Multiculturalism in full play! It is just incidental that the mridangam player at this concert, V.K.Prasad, started as a drummer.

The repeated applause from the audience was an endorsement of how well it was appreciated by the audience. The Malladi Brothers, Sreerama Prasad and Ravi Kumar, started the three-hour concert with ‘varnam’ in saveri raga, an appetizer that sounded somewhat modest. But the rest was just rapturous. Next, the Ganesh krithi Gajavadana in Sri Ranjani raga was rendered with extended kalpana swaras. This was followed by popular Dikshitar’s popular Swaminadha paripalaya in raga Natai. Then came St.Thyagaraja’s composition Naada sudharambilanu in Arabhi with alapana and the krithi sung in an awesome manner.

Then came the main piece for the evening Dasaradhee nee runamu in Thodi. Mridingist Prasad’s thani avarthanam added to the allure of this piece de resistance.

When the audience were just recovering from a state of ecstasy came Ragam, Tanam and Pallavi set in raga Natakuranji. Ravi Kumar brought the intricate structure of the raga with the fine timbre of his voice and the raga bristling with many brugas.

It might have been raining outside, but inside it was a downpour of delight when the brothers took up Ragamalika choosing ragas Valaji, Hindola, Charukesi and Hamir kalyani as shining pearls in the string. It was mind blowing.

Throughout the performance both Prasad on mridangam and Venktraman on violin provided excellent support. Violin is a second string to the bow for Venkat, a full time IT professional. But his performance was as good as any in the business.

After such an array of awesome krithis, the Malladi Brothers switched to thukdas (minor items). Even here their armoury was extensive. Besides the well-known Purandaradasa and Annamacharya, they chose pieces from not-so-mainstream Badrachala Ramadasu and Ganapathi Ssachidananda (Hanuman bhajan).

Their virtuosity extended until the end as they concluded the concert with marali marali mangalam in Madhyamavathi.

The evening before the concert, a couple of dozen rasikas had an hour-long meeting with the Malladi Brothers for an informal Q &A session. The questions ranged from personal to professional, their career path to classical music technicalities that many of us had in our head for a long time but were afraid to ask. It was an opportunity worth grabbing and well rewarded.

Notwithstanding the jet lag after a long flight from India, they sat well past dinner time to answer every one of the questions. Music seems to run in their family’s veins as their grandfather, father and uncle were all musicians of note from whom the brothers cut their teeth. Like most musicians of today, they are both university educated. They did not decide on settling in a musical career until the completion of their degrees even though they regularly accompany their father and uncle – the original Malladi Brothers – at their stage performances. They had their own first public performance in 1989, major breakthrough in 1993 and from then on, never looked back. Since their first overseas tour in 2001, they have been to every country wherever Indians carry their love of classical music with them.