The Queen was not the only matriarch acknowledging service to the community through her honours this month. Amma’s Ashram in Carrum Downs celebrated a multicultural event recently, acknowledging the service of community leaders Chidambaram Srinivasan, Geeta Devi and Suteeporn Sullivan. 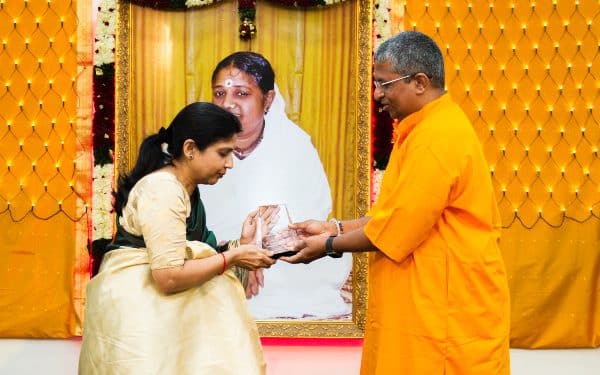 The event ‘Embracing Peace 2019’ was hosted by the MA Centre (Aust) Foundation, a not-for-profit inspired by the world humanitarian leader Mata Amritanandamayi Devi (Amma). This year’s theme ‘Grace in Action’ focussed on fostering the ideal of service (sewa) through compassion, acceptance and understanding.

This was the fourth year of this annual event and the inaugural year for presenting community awards, according to Nava Subramaniam, Director of Amrita Australia Ltd, one of Amma’s many charitable organisations in Australia.

Amrita Australia’s mission, as a public benevolent institution, is to provide relief to persons within Australia and overseas who are unable to care for themselves or who suffer from poverty, sickness, destitution and helplessness.

Among its current community outreach projects is a Kids Breakfast Club – a program in Melbourne’s southeast that provides breakfast at local primary schools, benefitting children who would otherwise start the day without a healthy meal due to a variety of reasons including economic and social circumstances.

Another project, Mother’s Kitchen, provides free nutritious meals to homeless and vulnerable persons each month in Sydney, Melbourne and Canberra.

Amrita Australia is also assisting with raising funds to construct AIMS Faridabad, a healthcare facility in Delhi NCR. The hospital, spread over nearly 100 acres of industrial city land, will include a multidisciplinary children’s facility and specialise in maternal and foetal medicine.

According to Nava, they are also exploring the feasibility of projects relating to women and children in crisis, refugee migrants, disadvantaged elderly and specific underprivileged community support programs in Australia.

The event ‘Embracing Peace 2019’ began with a prayer for world peace and harmony. This was followed by performances from local and professional artists including a very well received presentation by flautist Vinod Prasanna.

Key speaker Sonya Kilkenny MP, Member for Carrum, commended the MA Centre for their ongoing efforts in contributing to the quality of life in the community. 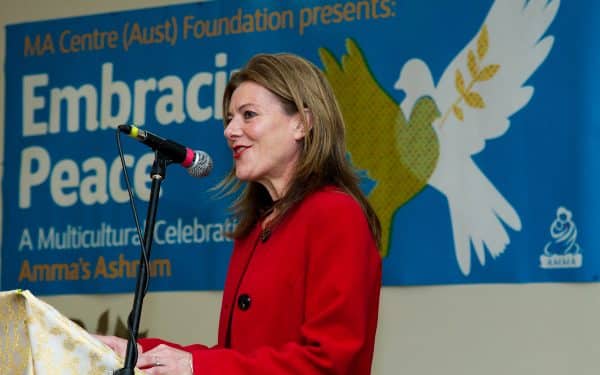 The evening also brought together spiritual leaders, dignitaries and members of the community to celebrate the unity amongst the diversity of cultures that makes up Victoria’s multicultural community.

Srini Chidambaram Srinivasan, former Commissioner at Vic Multicultural Commission, was awarded for providing community leadership and business mentoring with a demonstrated history of working in the management of the non-profit organisation. He was commended for his strong commitment to promoting social cohesion, especially in making the arts and cultural scene more representative of Victoria’s diverse society.

Suteeporn Sullivan, a volunteer with TIWA (Thai Information and Welfare Association), was awarded for providing support to women in her community. She set up a Thai single mums group as well as an Asian women’s network to help women stay connected, support each other and share their culture. 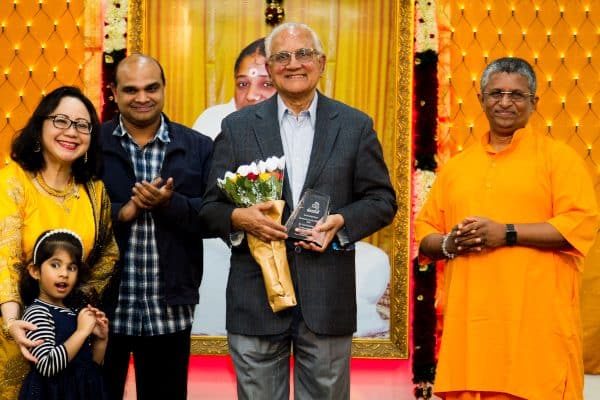 Nava, who is immensely inspired by Amma’s humanitarian efforts, spoke about her experience of knowing and travelling with Amma for nearly two decades with awe. “She has an energy and presence that is extraordinary and divine,” she said. “Even as she travels the world hugging thousands of people, she continues her good work quietly and with great focus.”

Similarly Amma’s Ashram is dedicated to spiritual, social and cultural connectivity through engagement with the community.

Independence Day: What freedom means to me