We woke up bright and early at 6. We’d only had three hours of sleep, but you wouldn’t have known it.

There was precious cargo to be transported, already packed and labelled, which we loaded into the car. This was a large box of A3 sheets of paper, each with bits of text that had been printed off and stuck together manually, to make up a cut-and-paste job of what looked like newsprint. Photos were packed separately, as they had to be converted to bromides and then manually stuck on to the specified spots on each page.

The craft work for Indian Link’s maiden issue was nearly ready for press. At press, there was more gluing to be done, and this time our fingers were black with the ink that was everywhere. Some seven hours later, the thrill was unmistakable as the first edition rolled off the presses. It was a sight I had seen many times on film – newsprint hurting down the conveyor belts – but this of course, was the real thing. 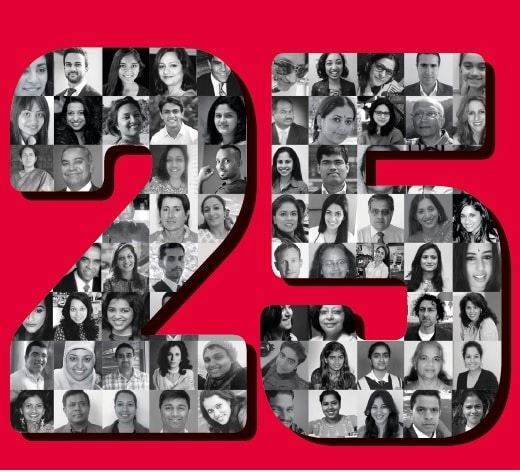 Today, it’s press day again. We’ve risen bright and early at 6. We’ve only had three hours of sleep, but you wouldn’t know it. There is precious cargo to be transported: our collective work from the past week, but it’s going to be done digitally, in a few hours from now.

While there’s been no cutting and pasting this morning, there has been so much else to put together to bring the activities of our busy office into a coherent whole. The Diwali art contest for kids is coming to a close, and just as we expected, the last minute entries are rushing in, with desperate mums calling to ask if they can send in digital copies instead of posting. The phones at Marketing are constantly ringing, as special deals are on for the festive season. Media personnel attached to politicians are getting in touch, with their special Diwali messages.

Last minute checks are currently being made on editorial copy. Promotional material is being delivered by couriers – aimed at the upcoming Diwali fairs and the cricket season – having been designed and ordered early this week. The printer is spewing out sheets of information for today’s live reads on radio. Social media posts and replies are being monitored in the background, prompting a chuckle now and then. Someone’s just shouted out about this morning’s coffee run.

Some seven hours later, the thrill will be unmistakable yet again, as our latest issue comes alive in its final form.

This month, we step into our 25th year of publication.

We’ve survived thanks to the community, which was growing by leaps and bounds at the time we launched. But mostly, we’ve thrived, not just survived, because of two strong principles that have been our cornerstone ever since the very idea of this project took root in our minds. These are a commitment to quality in terms of content, design and regularity of production, and the amassing of a storehouse of talent behind us that we like to call the ‘Indian Link family’.

Graduating from a small 24-page black-and-white monthly publication in 1994, produced with next to no resources except the voluntary contributions of a small group of six interested people, Indian Link is now a media group active on many platforms. It produces 72 publications a year, with a team of more than 70 regular contributors and reports from every major city in Australia.

Its radio arm broadcasts 24 hours a day and can be heard online, via a smartphone app that has been downloaded some 13,000 times, or on TuneIn Radio.  In recent years, our social media presence (via Facebook, Twitter and Instagram) has grown exponentially. It has strengthened our online presence, including our e-paper, e-newsletters and website, and allows greater interaction with our print newspaper. A YouTube channel hosts our video stories. We draw from each of these sources to also deliver news directly to the inbox of subscribers every week.

Ever since the Multicultural Media Awards were announced in NSW in 2012, our team has become the most-awarded ethnic media group in the state, bringing home 21 awards and even more nominations, in a whole host of categories. We have been the Best Print Publication and Best Online Publication, have published the Best Print and Online News reports, produced two Multicultural Journalists of the Year, nurtured three Young Journalists of the Year, been rewarded for Innovative Use of Digital and Online Media, recognised for our community work with a Harmony Award, and have won accolades for our Coverage of Community Affairs Abroad and Best Image of the Year.

Many of our contributors are well placed and experienced in their respective fields such as in new technology, legal issues, sustainability, creative writing, women’s rights, performing arts, arts review, language teaching and in sport, and provide high quality content, well researched and properly referenced, content fact-checked at their own levels.

Commensurate in their role as contributors, are our valued advertisers who help us to stay afloat – community SMEs, corporates, government departments, and businesses from India seeking to enter the market: we couldn’t have done this without you.

Primary in our coverage are issues that directly affect community members – New Australians – as they assimilate, highlighting challenges as well as achievements which the mainstream media might ignore or deal with only cursorily.

Equally, on the other side, we look at challenges and achievements within the wider mainstream, as it grapples with an increasingly diverse population. Our considered commentaries on the changing nature of Australian society as it becomes more culturally diverse, have been widely welcomed. On contentious issues such as immigration policy (eg. citizenship tests, 457 visas, parental visas) we offer a viewpoint that adds to the debate in the mainstream.

From within the community, we provide analyses of government and corporate efforts in building bilateral ties; trends in relevant sectors such as health, education and immigration; social and cultural expressions of community members; the prolific performing and visual arts scene, and the increasing trend in fund-raising events as the Indian community becomes more settled and begins to give back to society.

We are proud also to feature everyday individuals who shine through with their intelligence and application, and contribute significantly to their adopted home, such as those that are featured in the Australian Government’s Honours lists.

We like to cast a regular look at the different layers that make up our community, with dedicated columns for women’s issues, seniors and the issues that concern them, the youth and their particular passions, kids (their lives at school and at leisure), the gay community in their attempts to reconcile their lifestyle choice with age-old tradition, and those outside our community who have strong personal or professional ties with India. Our features on travel, heritage, food, sport, literature, health, fashion, Bollywood and humour are read with interest in both the Indian and the wider communities.

When the mainstream has a question about India, or when the community has a story to tell, Indian Link is the first point of contact.

Advertising is kept stringently distinct from editorial, and clearly demarcated from it. In the odd instance where a message goes out on behalf of an advertiser, the page is clearly labelled as ‘Advertorial’. Advertising is strictly regulated, with a clearly set out rate card.

And yet, while we whole-heartedly embrace new trends such as those in technology, we prefer to be old-fashioned when it comes to separating our editorial content and our advertising. We follow an ethical business model and will not be seduced in any form of “cash for comment”. We have managed to keep at bay the recent upsurge in native advertising (where ads are camouflaged to look like news), supposedly the way to go to survive in a diminishing industry.

Social media posts are carefully planned as we suss out what is an acceptable amount of times we appear in your feeds.

With multiple awards under its belt, Indian Link has gone on to become the leading observer of the trends in Australia’s Indian community.

Observing the trends for over 24 years now has enabled us to draw conclusions about community movements with some precision and objectivity.

This was particularly true in the case of the students’ crisis. Our reports were unbiased, taking into perspective the views of all parties involved, and pointed out flaws in the system as well as suggestions for the future. Our take on the issue, considered balanced and mature, made us a leading commentator for both the Australian and the Indian media.

At election times, Indian Link polls gauge the mood of community voters have become a long-standing tradition. We would like to go so far as to suggest, that our analysis enables the undecided voters to make up their minds, our coverage significantly influences public opinion.

Our reports are not always flattering to community stakeholders, such as when we explored the divisions within community organisations a few years ago, or the debacle that was the Pravasi Bharatiya Divas in Sydney more recently. Yet the readers out there see the merit in our assessments and in our objective editorial position. They understand better than those purporting to hold community leadership positions, that putting Daniel Andrews on the cover, for instance, does not make us Labor supporters, just as reporting a community poll in favour of the Coalition does not mean we back the Liberals.

Indian Link is proud also to have become a valued work experience provider for high school students as well as journalism cadets from university. Internships at our Sydney headquarters have led to full-fledged careers in the mainstream media such as SMH, The Daily Telegraph and SBS.

LOOKING TO THE FUTURE

In a scenario where community newspapers are spawning even as their mainstream counterparts are dying off, we at Indian Link hope to keep carrying on with the same ideals with which we started. The times ahead are indeed exciting, not only as we reinvent ourselves as our industry goes through an upheaval, but also as the mainstream finally begins to give us some attention. There are deadline pressures to contend with as always, plus the stresses of diminishing revenue and new forms of media that we struggle to understand. Reporting on a community that is beginning to feel some growing pains (health issues, old age issues, bicultural stress in the youth, assimilation issues in new migrants, domestic violence, even a gradual increase in gambling addiction), we have our work cut out for us.

In 20 years, we hope to tell our future generations that we were able to help create that perfect blend of Indian and Australian values and lifestyle that has made us a successful multicultural community. We have kept our Indian traditions alive and lasting while learning and integrating from Australian culture the values of openness and fair go.

The support of the community, we know, will continue to be with us just as we continue to tell their stories.

Hindu Council of Australia names its Gargi Women for 2019