It’s a level of political obsession that’s unimaginable to many. Very few real people inspire that kind of fervent devotion, especially in politics. But Narendra Modi is no ordinary person. His god-like status in India stands cemented, with chants of ‘Har Har Modi’ (a play on the religious chant ‘Har Har Mahadev’) from his followers, as the results of the 2019 Indian elections began to come in. By likening Modi to the great god Mahadev aka Shiva – the Supreme Being; the Lord of Divine Energy, time, destruction; Supreme Destroyer of Evil; Lord of the devas (gods) – his supporters have made their devotion to the Indian Prime Minister very clear.

And this devotion transcends national borders.

As the western hemisphere was still waking up to the election results on Thursday 23 May, NaMo supporters in Australia had a clear advantage with regard to their celebrations. With trending hashtags like #ModiAaGaya (Modi has arrived) and #NaMoAgain, they rejoiced in Modi’s re-election in quintessentially Indian fashion, i.e. loud and proud.

As we write this, late on Thursday night, there are Vijay Parva (‘Victory Festival’) events organised in every metropolitan centre, with dancing, dhol music and the big screen TV at the back that has been blaring the resounding results all afternoon.

Members of the Overseas Friends of BJP (OFBJP) are celebrating into the night.

In Sydney, the General Secretary of the OFBJP Rahul Jethi said, “We had a Vijay Diwas (celebration day) back in 2014. This time round it’s a Parva, a festival in continuation!”

Some 300 people gathered at the Parravilla Function centre, most joining in after work. (Among the revellers was Scott Farlow MLC – well-known for his own Indian links – who made an impassioned speech congratulating Modi).

Keyur Kamdar of OFBJP Perth shouted over the dhol in Fusion6 Restaurant at Wembley, “Junta ne bumper voting karke government ko second term di hai. They showed confidence in Modi’s development policies and acknowledged his hard work. And so we thought it was time to bring out the band-baaja and the mithai!”

All agreed that it was a tremendous victory, predicted by the polls, no surprises there.

The BJP is the first political party in India to reach out to the diaspora and build a base that can contribute in multiple ways, even if they can’t vote.

Take the NRI4NaMo community for example. Touting themselves as the biggest volunteer community of the Indian diaspora, this organisation of 20,000+ volunteers across 121 countries and boasting 100,000+ Facebook community members, invested 70,000+ volunteer hours with the sole intention to ensure that Narendra Modi got re-elected and continued to be the Indian PM.

In our own backyard, the OFBJP claims it made 10,000 calls to India to garner support for Modi; put campaign stickers on no less than 1000 cars; organised 40 events at iconic locations such as the Sydney Opera House, Melbourne Cricket Ground and Optus Stadium Perth; had a social media reach of 2 million impressions, and featured some 30 articles about their activities in Indian newspapers.

“The global outreach of the BJP is not new,” Brisbane’s Malpe told Indian Link. “It began in the Indian diaspora in the US, giving the community there the opportunity to be involved in Indian politics. With social media, the movement has spread.”

Keyur Kamdar agreed, “At OFBJP we want to ensure that people living outside India continue to be attached strongly to major trends there.”

The sentiment is seen in other diaspora communities as well. Jay Shah observed, “The American diaspora have active platforms such as Republicans Overseas and Democrats Abroad. We all have very strong links to our home country and want to do our bit to help it develop and prosper.”

Yet the BJP karyakartas seem to be a different breed of animal altogether. Many of them have taken time off from work to go back home and contribute. And such is the utsaah (enthusiasm), Kamdar reported, that some Perth residents are planning a trip back home just to be around for the swearing-in. 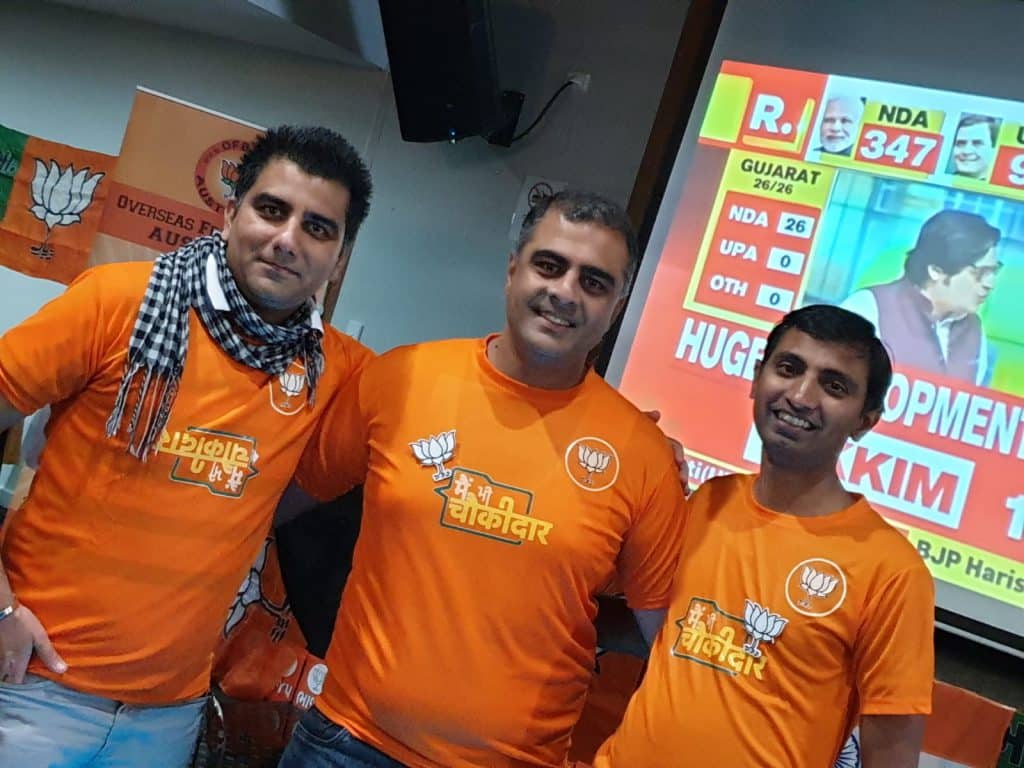 For Rahul Jethi, the strong investment in BJP is an ideology he grew up with. “The BJP is about enterprise and opportunity; it’s about giving people the means to create a better life for themselves, not to handicap people by dishing out benefits. As well, to do the right thing by your country. The Liberal Party here in Australia, of which I am a member, has that same ideology of empowerment. So for me, it’s been a smooth transition.”

Jethi was actively involved in the launch of the OFBJP ahead of its election win in 2014. Since then, the organisation has grown nation-wide, and has organised some highly attended events with visiting BJP members of rank such as Sambit Patra (official spokesperson) and Prakash Javadekar (Minister of Education).

The Perth branch was launched only in March this year. Keyur Kamdar revealed, “We held our first event, a Chai Pe Charcha (Modi’s favourite mode of interacting with individuals and small groups over tea), and 70 people turned up even though we did not advertise. At the Vijay Parva, 90 people turned up, and I’m happy to say we come from all parts of India – Himachal, Kerala, Gujarat, even Arunachal Pradesh. Our next events are screenings of the films Narendra Modi and Tashkent, a film about the death of Prime Minister Shastri.”

Rahul Jethi has the last word: “The OFBJP’s activities in the future will be to bring our two countries together culturally and socially, to work together to help make the world a better place.”

For the moment, though, the members of this organisation are simply ecstatic about the election results.

“Landslide” is a term being used in relation to the BJP’s momentous win for a second straight term, and it’s not uncalled for. As we now know, the BJP on its own won more seats this time round than it did in 2014, and it wouldn’t be foolhardy to say that all of it was thanks to Modi’s cult of personality.

Sydney surgeon on a mission