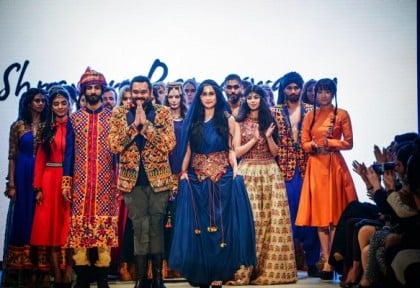 The continued efforts of veteran designers like Ritu Kumar, Sabyasachi Mukherjee and Wendell Rodricks to bring Indian textiles to the fashion forefront is motivating younger talent to value the country’s rich handloom heritage instead of looking abroad for inspiration.
And the growing interest of international markets in India’s handloom and craft traditions has also opened business avenues on this front.
As ace designer Deepika Govind, who has worked tirelessly with fabrics like khadi silk and khadi cotton, puts it, “Frankly, seniors reaped rich rewards from a design perspective that is rooted to its land and its culture.”
“Besides that, there is appreciation of foreign guests and NRIs who are visiting the country (towards handlooms). Also, seeing the usage of our craft and textiles by numerous international designers on the ramps is motivating many.”
“Innumerable schemes by the Indian government and varied endeavours by NGOs as well is also said to be the reason behind this change,” she added.

At the recently concluded edition of Lakme Fashion Week (LFW), five budding designers showcased collections inspired from different parts and cultures of India. The gala dedicates an entire day to Indian textiles and sustainable fashion in all its editions where some of young and emerging names, along with old faces, showcase their designs.
Here, the use of desi handloom and textile turned out to be a common factor for the majority.
From being inspired by the traditional Bengali “Laal paar saada sari” (red bordered white sari) to the use of Kantha embroidery, there was a strong India connect at the LFW Summer-Resort 2017.
Even the first two days of the Amazon India Fashion Week (AIFW) Spring Summer 2017 was dedicated to Indian handlooms and textiles with young and creative names like Divyam Mehta and Paromita Banerjee expressing their love for organic fabrics via clothes.
For young designer Aditi Somani, India’s rich cultural settings and traditions have served as a muse for many.
“The thought that many young designers are getting drawn to our roots is ironical because the west too is taking inspiration from what India has to offer. The western attention is making us appreciate and value our own art. Also, young designers have discovered the lucrativeness of capitalising on their own histories and traditions,” Somani told IANS.


Handloom has turned out to be a huge trend for brands too.
Meesha Scarves, a brand by Trisha and Meesha Khanna that has been a part of Paris Fashion Week, is a case in point.
“We have always been keen to explore the heritage and craft the various regions in India. For Spring Summer 2017, we travelled to West Bengal and worked closely with Jamdani weavers for a cotton handloom capsule. Increasingly, we feel the new stems from the old and it would be such a loss if we didn’t look to our history for inspiration,” Trisha told IANS.
Meesha, however, said that there will be some designers who will continue to find inspiration from the West, but she feels looking at India will bring some change.

“We don’t think the West is no longer impressive. They have mastered their skill and craft in amazing ways that are a constant learning to our industry which is still relatively nascent. Having said that, we are different and can bring a new perspective to the forefront,” she said.
Young designer Hardika Gulati said, “India’s dressing sense has witnessed some sort of paradigm shift, which has led to the emergence of the fusion genre of fashion.”
“Jeans complemented with kurtis and adorning spaghettis with saris are a few of the instances one can name in this space. Having said that, Indian design creations… stand distinctly recognised the world over and, as a matter of fact, Western houses of fashion are participating in Indian fashion weeks.”
–With IANS
- Advertisement -
Share
WhatsApp
Facebook
Twitter
Linkedin
Previous articleIndia have attack to beat Australia on true pitches
Next articleSaving an endangered bird – with tricks, tactics and love