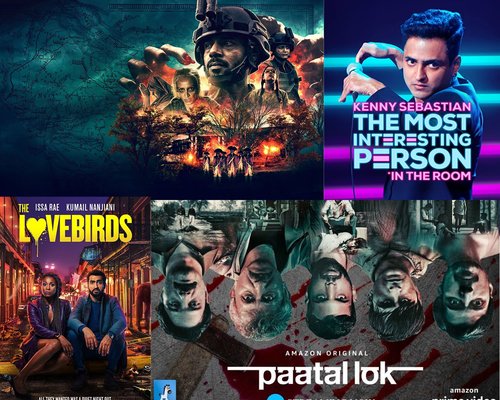 Although Netflix India has had a slew of failed horror attempts, this show hopes to change the platform’s luck. Produced by Shah Rukh Khan’s Red Chillies Entertainment, Betaal is Khan’s second Netflix venture after the successful Bard of Blood. In Betaal, highway officials unearth an old curse in a remote village and inadvertently bring to life an army of British soldier-zombies.

Betaal starts streaming on Netflix on 24May.

Starring comedians Kumail Nanjiani (known for Silicon Valley and The Big Sick) and Issae Rae as a couple on the verge of breaking up, The Lovebirds has them on the run after witnessing a murder. In trying to clear their name, they try to figure how they, and their relationship, can survive the night. The Lovebirds also stars Paul Sparks, Anna Camp (from Pitch Perfect), and Kyle Bornheimer in supporting roles.

This much-awaited romantic comedy on Netflix will release on 22 May.

In this thriller series, a cynical inspector must investigate a high-profile assassination attempt which leads him into the dark realm of the underworld. Paatal Lok features a talented cast of actors, including Neeraj Kabi (of Sacred Games fame), Jaideep Ahlawat (Gangs of Wasseypur) and Gul Panag. It is produced by Anushka Sharma’s banner, Clean Slate Films and was lauded by Bollywood names like Anurag Kashyap on the day of release.

Paatal Lok became available for streaming on 15 May.

Kenny Sebastian: The Most Interesting Person in the Room (Netflix)

After Vir Das and Kanan Gill’s comedy specials earlier this year, Netflix follows up on streaming India’s comedic talent with this special by Kenny Sebastian. Known for his musical talents and less-than-ideal Hindi knowledge, the comedian’s newest offering Most Interesting Person in the Room gives him the platform to discuss promiscuous footwear, flightless birds, and the fear of not really being funny.

You can catch the Netflix comedy special on 29 May.

READ ALSO: Much-anticipated movies to catch when the lockdown ends

Rhea L Nath
Rhea L Nath is a writer, editor, and content creator based in Sydney. She was nominated for Young Journalist of the Year 2020 (Premier's Multicultural Media Awards)