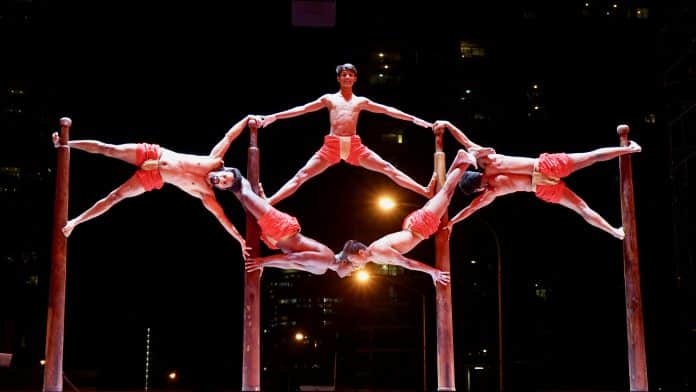 The ancient Indian sport of Mallakhamb comes to Sydney next month as part of Sydney Festival 2019, all dressed up as a work of art.
The show Mallakhamb India presents some incredible feats of daredevilry – and poise – as practitioners, extreme gymnasts, use vertical poles to show off their physical as well as mental prowess.

They climb, they slide, they hang, they twirl, they balance – as they grip the pole with their hands, feet, knees and toes.
Originating in Maharashtra around the 12th century, Mallakhamb is a little-known physical practice that is believed to have been prescribed as fitness routines for wrestlers. ‘Malla’ means wrestler and ‘khamb’ stands for pole, so the term could be translated to mean ‘pole wrestling’ or ‘the wrestler’s pole’. Like traditional wrestlers, practitioners wear a langot, grease their hands with castor oil or rosin, and remain barefoot.
Historical texts make mention of the Mallakhamb in ancient Vadodara, Nashik, Koture and Saptashringi, and there is some evidence to suggest the early practitioners were devotees of the monkey god Hanuman.

Macquarie University researcher Jon Burtt, writing in the International Journal of the Arts in Society (2010),  traced Mallakhamb to the ancient text Manasollasa (1135AD), “a detailed instruction manual on the scholarship and military training of young Chalukyan princes, written by the Chalukyan King Somesvara III.”
Today though, this ancient practice has evolved into a sport. Competitively, it is the same as modern gymnastics, where a bunch of judges score the routines of individual participants. There are pole, rope and hanging versions of Mallakhamb.
The sport came out of India for the first time in 1939, as an exhibition sport in the Berlin Olympics. It is believed Hitler himself was impressed enough with the gymnasts to present each one of them with an honorary medal.
As well, Mallakhamb has evolved into an artform. Artists have toured Australia frequently: they were at the Gold Coast earlier this year as part of the Commonwealth Games. Their new show, titled Mallakhamb India is a rare opportunity to see the form’s top artists from Mumbai, in a masterful show by Australian director Benjamin Knapton, performing to a live soundtrack presented by Mumbai-based musician Donn Bhatt.
Knapton says in his directorial statement that Mallakhamb has been one of the highlights of his career. “Unlike previous presentations of Mallakhamb on the stage, which run for no longer than 6 minutes, this show has gone through a long artistic development period to authentically transform the training practice into a work of art. The show is influenced by history and its relationship to now, the past and present of India, as well as the connection between our respective cultures. This Mallakhamb show is physically brutal and tender, spiritual and irreverent, astounding and human. It is about the 6 artists that present it, their bodies and how they connect with the world around them.”
FREE EVENT
WHEN 11-13 January
WHERE Prince Alfred Square, Parramatta
CHECK OUT ALSO
Mallakhamb artists in Sydney Festival Talks Talking Circus: Through Different Lenses, 13 January at Riverside Theatre Parramatta. Free event.
Also read: Shubha Mudgal and Aneesh Pradhan with Sandy Evans at Sydney Festival 2018
- Advertisement -
Share
WhatsApp
Facebook
Twitter
Linkedin
Previous articleIndian classical meets Australian Jazz
Next articleIndian Link’s Person of the Year