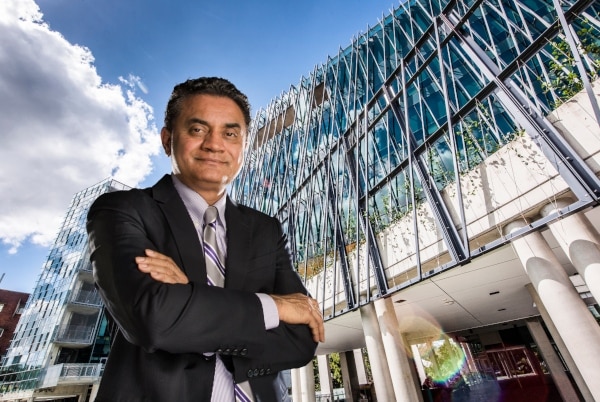 A look at the career highlights of Prof. Arun Kumar Sharma makes one wonder why his Australian Government honour did not come sooner.
The Queensland University of Technology’s Deputy Vice Chancellor (Research and Innovation) has made many noteworthy contributions in a wide range of areas, as he straddles the worlds of university, research and industry.
“Yes I have tried to (be broad-based),” Prof. Sharma told Indian Link. “I’m pleased that this recognition has come my way, and grateful that my contributions are acknowledged.”

In his own area of expertise – ICT, Prof. Sharma’s work has significantly impacted Australia’s research and innovation policy. In the early 2000s, as UNSW’s head of the School of Computer Science and Engineering, he co-founded the Cooperative Research Centre for Smart Internet Technology, a seven-year project that linked universities, industry and federal and state governments in the research and development of high-end internet technologies. The research expertise that arose from the program has paved the way in areas such as ad hoc networks, agent technology, artificial intelligence and data mining.
Also in the early 2000s, Prof. Sharma co-founded and became inaugural Director of the National ICT Australia (known then as NICTA but now a part of CSIRO Data61). The organisation’s role was to pursue potentially economically significant ICT-related research for the Australian economy.
“To establish corporate research centres in technology has been rewarding and fulfilling,” Prof. Sharma said.
Taking up his current position at QUT in 2004, Prof. Sharma has focussed on building the university’s research capabilities very successfully. “Our research income has tripled,” he revealed, adding, “and we have also increased our research ranking substantially. Particularly satisfying for me has been the expansion of our research centres in regional areas.”
Sharma has been actively involved in Bluebox (QUT’s innovation, venture and investment company), and in corporate research centres in a variety of sectors such as diagnostics, construction innovation and integrated engineering asset management.
He has also sat on the boards of a number of institutes, again showing a breadth of interest and expertise – children’s medical research, Gallipoli research, sugar research – and has been on the board of the Adani Abbot Point Terminal ever since they acquired it in 2011.
About Adani, Prof. Sharma noted, “They want to address the energy needs of India. I hope (the project) will go ahead. They are doing their bit for renewable energy too. I think we need to create a balance in how we look at climate change and economic opportunities.”
Sharma’s particular passion for fostering Australia-India links has been long-standing. He served as national chair of the Australia India Business Council (2011-2012) and as President of its Queensland chapter (2005-2011).

In 2011, when his university conferred an honorary doctorate on Bollywood superstar Amitabh Bachchan, Prof. Sharma may have inadvertently played a role in breaking bilateral tension. In the wake of the strained relations between India and Australia following the student attacks of 2009-10, Amitabh Bachchan had rejected a university honour from Australia. His acceptance of the QUT honour, engineered by Prof. Sharma, may have helped in its own way to bring the balance back in the Indian public’s perception of Australia.
Sharma was born in Bihar and studied in Assam and New Delhi. He got his undergraduate degree at the prestigious BITS Pilani, then a PhD from the State University of New York at Buffalo and a postdoc from MIT.
He moved to Australia in 1991 to work at UNSW.
The move from research and teaching to administration helped him tick off many items on his wish list. “I felt I was able to make a greater contribution by helping build institutions; the impact that I had (as an administrator) was far greater… and it’s been a role I’ve enjoyed.”
What’s in the future for Prof. Sharma?
His brilliant mind is brimming with ideas.
“I hope to undertake projects in renewable energy, going forward. I’m also writing – on the future of tech, and the future of work. I’m also keen to look at more bilateral projects in the India-Australia space.”