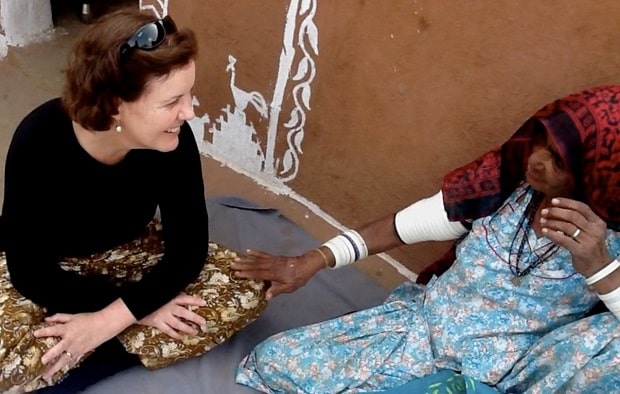 After graduating in Adelaide with a Fine Arts Degree, Deborah Emmett worked as a Graphic Designer. While travelling through South East Asia, she became more interested in textiles, but it was only on arriving in India that Deborah was so inspired by the vivid colours and intricate designs of the textiles there, she knew her life was about to change course.
While in New Delhi, Deborah came up with the idea of importing embroidered Kashmiri jackets. A friend introduced her to the owner of a shop that sold the quality jackets she was looking for. It was to become a lifelong partnership, for they married and became business partners, developing a business centred on their mutual interest of designing clothing and soft furnishings using traditional techniques of dyeing, weaving, crewel embroidery and wood block printing.
Since then, Deborah has divided her time between Sydney and New Delhi, where her textile design business, Tradition Textiles, is based. Integral to the design process is the creative and practical input provided by the artisans she collaborates with, while the inspiration for the designs is drawn from her observations in India; for example, the geometric patterns found in latticework for which the city of Jaipur is renowned.
From New Delhi, Deborah travels to remote villages in Rajasthan where skilled artisans practice their craft. Here the woodblocks are carved and used to produce printed textiles. In the village of Saganer she meets with Dinesh who carries on the family tradition of woodblock printing. Garment stitching is done by Bhukhu and other women who are all highly skilled in appliqué in a village near Jaiselmer.
Since Tradition Textiles began 14 years ago, Deborah has worked together with the artisans to achieve incremental improvements. Based on the concept of micro financing, equipment and machinery was purchased to enable Dinesh to increase production. For Bhukhu, ongoing work has allowed her to pass on her craft to several family members. Another family of artisans Deborah works with were able to send their daughter to University and after graduating with an MBA, the family business has expanded.
While many international designers come to India to incorporate printing and appliqué in an upcoming season’s collection, they generally visit only once and instead engage agents to seek out the artisans; rarely, if ever, meeting with them in person. Deborah travels to India twice each year, spending several months there to finalise the summer and winter collections. Early on she recognised the importance of explaining the design process from start to finish. Bhukhu had never met a foreigner before and while she had produced appliqué at the request of agents, Bhukhu had no knowledge of the end product. “Once you explain this the artisans understand what the consumer would want them to make. Going out to the villages and meeting with the artisans is crucial. It is also empowering as the artisans are encouraged to participate, so that the design process involves both the designer and the artisans who are encouraged to make suggestions and give creative expression to their designs,” says Deborah.
And while they find Deborah’s design aesthetic very different, the artisans can appreciate that traditional textiles are equally suited to modern living, thereby keeping those traditions alive. From beautiful scarves woven from natural fibres, designs printed on cotton and silk kaftans, woodblock patterns on table linen and embroidered fabrics for furniture, the designs offer new opportunities for their craft.
Based in both, New Delhi and Sydney, Deborah finds her neighbours in each city very different. When I ask her to characterise how, she responds that people in New Delhi have a wonderful sense of humour and are used to working collaboratively with friends and family. Australians by contrast, live in a more isolated way, often working alone. But the cities have similarities too. Both are multicultural with people drawn from different cultures who live together.
With a busy lifestyle that also involves lecturing in Graphic Design and completing a Masters Degree at the University of NSW, Deborah is also working with several Indian textile artisan groups to design a range of textiles for an exhibition to be held in 2014. When I spoke to her about next season’s collection, she advised that she had a plane to catch bound for New Delhi.

Deborah recently spoke at the Museum of Sydney on New Delhi as part of the 52 Suburbs around the World exhibition.