Manjit's @ the Wharf, Urban Tadka get their first Chef Hats 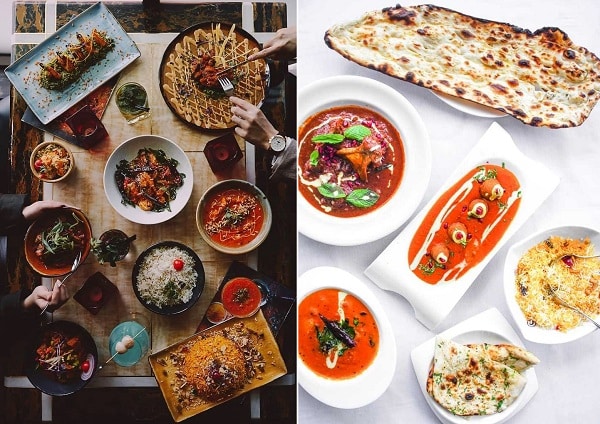 
“But that will be a long time away,” he had qualified his statement hurriedly, adding humbly, “There’s so much learning to do before then.”
That was two whole years ago, in 2016, and the then 28-year-old was taking on his first role as head chef.

Varun has grown considerably since then, in confidence as well as experience, having stamped in the family-owned business as one to reckon with in the Indian restaurant scene in Sydney.
The daring young chef’s exciting take on age-old favourites is pushing the boundaries of Indian cuisine, as he spearheads innovation in technique as well as presentation. His Eggplant Takatak is but one of his works of art that has been Instagrammed innumerably – the drama of the cloched baingan bharta never failing to lighten the mood around a table. Similarly, Varun’s pie-style Biryani also brings a smile to the face as it is laid out in front of you. The scallops are gently cooked, and it is left to you to flavour with your choice of 17 different powdered spices arranged in an ‘artist’s palette’ presentation.
Other experiments have been equally popular. Lotus root mash. Powdered beetroot. Street-style chaat presented in an ice cream-style cone. Imli (tamarind) martinis. In mango pistachio kulfi, two perennial favourite kulfi flavours combined in one tall spire, standing in a delicately flavoured sauce.
Equally solid has been the contribution of his brother Deep Gujral, who takes the Manjit brand out to the community in his role as events coordinator. “Corporate events, community-based functions, weddings … we’ve earned a reputation for them all. My own favourites, I must confess, are weddings. I love going through with a young couple, the process of planning their special day, and then executing. It’s hugely rewarding when it all concludes satisfactorily. It’s also resulted in some great friendships. I’ve just had lunch with a friend, whose little son’s birthday we are hosting. This will be the third generation in the family for who we have been hosting events, over a 35-year period!”
Karandeep and Varun have done much for the family business, taking it up several notches with their fresh approach to it all – and with their first Chef’s Hat.
The Gujral family’s love of food has been apparent also in its numerous appearances on television and radio. To mainstream Aussies, used to their butter chicken and vindaloo dishes, the Gujrals have helped acquire a more nuanced appreciation of Indian cuisine.
“Where else in Sydney would the President of India have dined,” wrote a regular patron under Manjit’s Facebook post describing President Kovind’s special request to visit the restaurant.
Master restaurateur Manjit Gujral started off in the industry in 1982 with his first restaurant in Potts Point. It then moved to Balmain, where it functions to this day, making it the oldest running Indian restaurant in Australia. The family then launched the Concord Function Centre, before taking up the Barrangaroo venue. A new city-based venue is on the cards, Karandeep reveals, for which three new chefs are being brought in from India for specialist Indian cuisines.
Manjit and wife Kanwal keep an eagle eye on the operations and management of the various arms of the company. A devout Sikh, Manjit tells Indian Link about this latest recognition, “It has been the blessings of the Almighty which has allowed us to share our passion with the Australian and Indian community at large. Kanwal and I could not be prouder of the achievements of our boys, and of the full family of Manjit staff.”
“We couldn’t have done it without the team at Manjit’s,” Varun echoes his dad, adding, “and the support of the community.”
The determination in his voice is unmistakable as he adds, “This is but the start of things to come.”
We’re standing by.
The Australian Good Food Guide awarded hats to 375 restaurants across the nation this year. Typically, the awards are based on judges who dine anonymously and pay full fare, as well as on readers’ votes, although the judging carries more weight. The judges pay particular attention to ingredients, taste, presentation, technique, value and consistency.
Urban Tadka
The Terrey Hills based Urban Tadka Indian restaurant has just won its first Chef Hat awarded by the Australian Good Food Guide 2019.

“I’ve been absolutely in awe, ever since I first heard,” Inder Dua, one of the restaurant’s three owners, tells Indian Link. “It was Monday morning, my day off, and I wondered who would be calling at 8.30am. It was AGFG informing us.”
The sheer responsibility of it all, though, did not take long to set in. “It was a feeling of elation – that all our hard work had paid off. After the moments of self-congratulation, the feeling of responsibility came on; that we have to maintain this position, continue to stay where we have reached, and indeed, strive to get further.”

Had they been working towards this goal? “Yes absolutely,” Inder responds immediately. “Since the day we began! It’s a hugely prestigious acknowledgement.”
The restaurant was launched in 2011 by Dimpy Singh and Mandeep Rana, both North Shore restaurateurs with years of local experience, with Inder joining a little bit later.
The Tadka Boys arrived, quite literally, with a bang, becoming a major player in the restaurant scene from Day One. Today, patrons come from as far afield as Penrith; Indian community events are held here with increasing regularity, and outdoor catering orders have gone through the roof.
As well, the mainstream are thronging in. Visit on any random week night and you’ll see the place filled to near-capacity with school mum groups, local diners, family groups.
“To have attained the Chef Hat, is I think, phenomenal for a restaurant that is only eight years old,” Inder muses. “Remember we were competing with restaurants all across Australia, and from all different cuisines.”
Urban Tadka is among a small subset of Indian restaurants in Sydney that is offering the mainstream a fresh new look at a centuries-old cuisine, repackaging traditional fare with a modern outlook. Here, you have street food of the little towns, with all the sophistication of the large metropolises.
Indian Link’s own menu items of choice at Tadka are Aallu ki chaalu tikki, Hare bhare chaman ke tukde, Murgh tikka, Fish kolumbu, Kesari lamb, and the variety of naans on offer.
You will be bowled over by presentation, without doubt, but top marks here for technique as well. It is clear that much attention goes into both.
But there are other considerations as well, such as social media.
“I think social media is such an important element of the restaurant business these days,” Inder reveals. ‘It is true that you eat first with your eye, hence Instagram! But it is also a way of keeping in touch with our patrons. We try and respond to all our comments – even the critical ones, as we try and explain issues to the odd unsatisfied customer.”
And how do they explain to their mainstream patrons what “tadka” means?
“We get asked this constantly,” Inder laughs. “We tell them it’s the final finishing touch in Indian cuisine. The tadka is where all the flavour sits, and which adds that bit of oomph to a dish.”
Here’s hoping there will be extra sizzles to their tadka, post the Chef Hat honour.
- Advertisement -
Share
WhatsApp
Facebook
Twitter
Linkedin
Previous articleOnto the next political chapter
Next articleFive lesser known gems in Thailand