As fair and frequent political reporting within India gets more difficult, maybe it’s time for Australian media to step up its game. 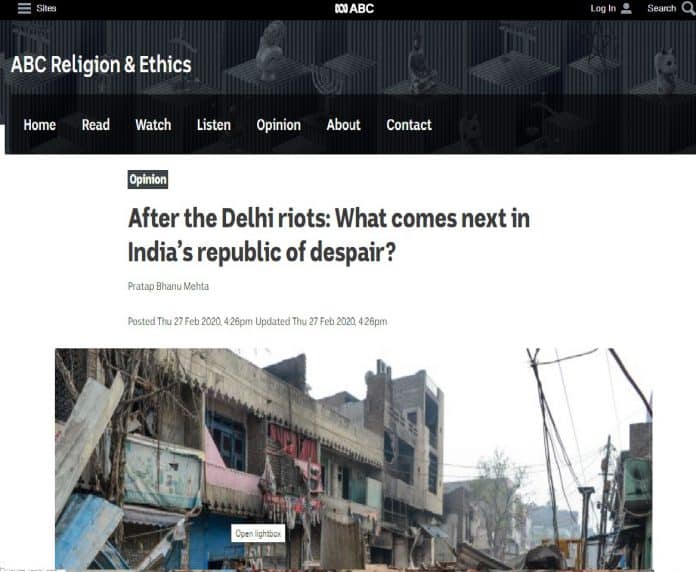 Last Monday, 24 Feb, I received a message from friends in Delhi that the Indian capital was gearing up for some serious violence. Mobs of religious fanatics were attacking shops, homes and religious spaces, while police looked on either helpless or complicit. I did what I do in such situations. I went to the ABC’s webpage. There I was greeted with stories of the CoronaVirus, the Sports rorts, several other important local and international stories, but nothing from India. Understandable, I reasoned. After all, news out of India never really makes the front page, television, radio or online in this country, unless of course there’s a nuclear threat or a cricket match in play. Having scoured the internet for more information, I came back to the ABC’s page to see if things had changed. Nope. Nothing.

It would not be until Wednesday the 26th that the first item would be displayed on the national broadcaster’s website with the headline: ‘Trump’s visit overshadowed by violence!’

Three days of violence in the Indian capital and the premier news website in Australia did not see fit to publish what was happening in the largest democracy, a close trading partner and a cricketing chum. The ABC was not alone in this delayed response to events in the region. Nine’s Sydney Morning Herald, The Australian and other Newscorp papers did the same. In other words, it was not until the death toll reached double figures, with the promise that it would rise, that news editors across this brown land decided this was worthy of coverage. And therein lies the problem.

By deciding to cover the story based on the number of people killed, the mainstream media is doing us, its clients, a disservice. It’s a story that’s devoid of context. There is no leadup to the events of last week. No context to the coverage of preceding events in Muslim universities, sedition charges against kids, nationwide protests, heavy handed state reprisals and so on. We are given this bone, this immediate news story that the Indian capital is in flames. But for the ‘why’ and the trajectory of the story, the flesh if you will, one has to go elsewhere.

For nearly thirty years, I worked for the ABC. First as a local stringer in Delhi, then as a foreign correspondent, later as a domestic reporter until I retired as an Executive Producer. All this time the general knowledge and understanding of India has been steadily declining. Not just within the general Australian community, but amongst the decision makers in newsrooms. And this, while the number of migrants from the subcontinent to Australia has reached an all-time high.

One can blame the rise of WhatApp groups, satellite television, the Internet and so on, where one can find news and information specific to one’s requirements. Add to this, the shutting down of South Asian bureaux by the mainstream media such as Newscorp, Nine (Fairfax) and the like. For instance, the ABC downgraded its offices a while back leaving the coverage of the entire region to a “one-person-video-journalist”. A kind of experiment to see just how much one person can be stretched on a small budget. And the coverage shows.

The irony is that reporting on India is getting harder and harder. Visas for journalists flying in are pretty much non-existent these days. New Delhi takes any foreign reporting about affairs there very seriously indeed. Especially now, when sectarian foment appears to be state policy. Add to this the fact that India’s economy is slowing down, taking with it the dreams of more than a billion people who were all promised ‘Ache Din’ not so long ago. Most outlets in Australia depend on the wire services, which means you get the same story repeated on all the major channels. Dedicated journalists, correspondents and experts are few and far between, with newsrooms content on filling airtime with stock footage and cliched scripting.

At a time when we need more scrutiny of the world’s largest democracy, where state sanctioned violence is on the rise, where dissent is crushed and where the idea of a secular, democratic country is under threat, the Australian media has gone AWOL. We may well be watching the hijacking of a 70-year-old secular experiment in our region by forces intent on remaking it into a theocracy, but if we cover the subcontinent the way we have thus far, we may not hear or see about it until after it’s long gone.