The report calls for making India on of Australia's top three export markets and the third largest destination in Asia for outward investment. 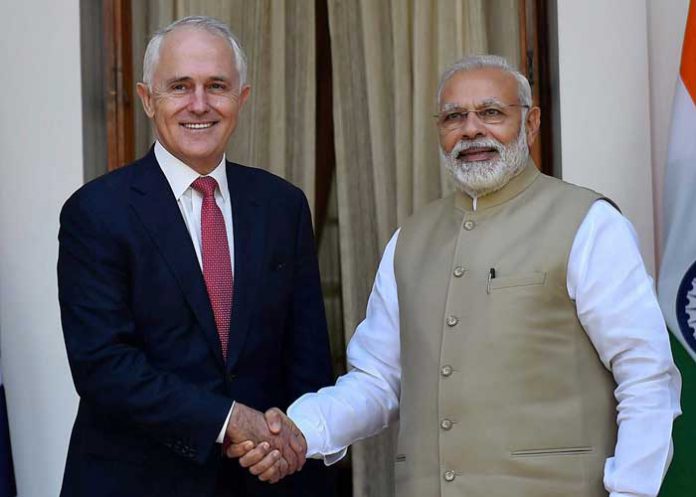 Reading Time: 7 minutesAustralia recently released a report on its economic strategy for India recommending that the latter should be put into its top three export markets and made the third largest destination in Asia for the country’s outward investment. The report titled ‘An India Economic Strategy to 2035’ –  authored by former Australian High Commissioner to India Peter Varghese – was welcomed by Australian Prime Minister Malcolm Turnbull.
The report said it would see Australian exports to India grow from $14.9 billion in 2017 to around $45 billion in the next 20 years, and outward Australian investment to India rise from $10.3 billion to over the $100 billion mark, reflecting a transformational expansion of the relationship. The report through its 90 recommendations noted that the opportunities, however, would not come down easily. The government would require a sharper national focus; and that patience, perspective and preparation is needed to engage with India.

The report identifies 10 sectors and 10 states in an evolving Indian market where Australia has competitive advantages where it should focus efforts. These are divided into a flagship sector (education), three lead sectors (agribusiness, resources, and tourism) and six promising sectors (energy, health, financial services, infrastructure, sport, science and innovation).
The Indian diaspora in Australia is expected to play a larger role in building these economic linkages, highlighting the importance of the largely prosperous 700,000-strong Indian-origin population here. The focus on states reflects that India is not seen as a single economy but as an aggregation of very different state economies, each growing at different rates, driven by different strengths, led in different ways and likely to continue to be uneven in their progress.
India: State of the economy
Today India is the fastest growing major economy in the world and offers immense opportunities for business and economic partnership. Australia’s new India economic strategy shows how India’s growing economic weight makes it an unavoidable economic partner, despite the challenges in navigating its market. It is not surprising therefore that Australia wants to press the reboot button in this relationship.
Many countries are reformulating their economic and foreign policies to engage India. India’s scale is extraordinary. By 2024, India would have overtaken China as the world’s most populous country. India has the world’s largest youth population, but isn’t yet fully capturing this potential demographic dividend – over 30% of India’s youth are NEETs (not in employment, education or training), according to the OECD.

By 2025, one-fifth of the world’s working age population will be Indian. By 2030 there will be over 850 million internet users in India. By 2035, India’s five largest cities will have economies of comparable size to middle income countries today.
Over the past decade and a half, India’s economic growth, its appetite for resources, energy demand, skill development, technical know-how and investment have made it an important trade partner and export destination for Australia. There is no market over the next 20 years, which offers more growth opportunities for Australian business than India. The International Monetary Fund’s World Economic Outlook reports that “the Indian economy is expected to grow at an annual rate of 7.4% in 2018 and 7.8% in 2019, lifted by strong private consumption, structural reforms and implementation of the national goods and services tax”.
Australia-India trade at present
Australia’s India Economic Strategy report acknowledges that though India is already in the first tier of Australia’s diplomatic relations, the economic relationship is stuck in the second tier.
Bilateral merchandise trade was only $19 billion in 2015-16 (compared with $150 billion for China), making India Australia’s 10th largest trading partner. Many Australian resource companies keen to invest in India have found themselves locked out of the market. Merchandise trade has declined by 50% in value since 2010.