In the recent virtual summit between the Prime Ministers of India and Australia, both Narendra Modi and Scott Morrison did not once mention China, but that country was clearly the third party in the room.

India has China at its doorsteps, with the expansion of its highly contentious One Belt One Road programme in Sri Lanka, Pakistan and other neighbouring countries. India is also at a standoff with China in eastern Ladakh in the Pangong area. At the virtual summit, PM Modi repeatedly stressed the importance of democratic values. “Given that we share democratic values,” he said to Morrison, “it is our sacred responsibility to uphold and protect values for global good like democracy, rule of law, freedom, mutual respect, regard for international institutions and transparency.” These values, he said, were under challenge.

Australia has also been subject to China’s bullying after PM Morrison called for an international inquiry into the origins of the coronavirus. China did not take too kindly to this initiative and threatened to retaliate, which it has done recently. Starting with high tariffs against Australian imports, to slowing the flow of its international students and most recently, issuing travel warnings to Chinese tourists to Australia, China has said that this is just the tip of the iceberg of their anger.

The signing of the maritime cooperation agreement between the two nations on the sidelines of the summit, too, hinted the shadow of China was always looming. Australia’s Foreign Minister Marise Payne, in an obvious reference to China flexing its muscle in the South China Sea said, “This agreement commits our nations to supporting the rules-based maritime order in the region, founded on respect for the sovereignty of all nations and international law, particularly the UN Convention on the Law of the Sea”.

Both countries mutually accept that India will be important to the concept of a cohesive Indo-Pacific region. The alliance between India, Australia, Japan and US will be important to counteract the growing intransigence in this area. They may well be supported by Vietnam, Philippines, Indonesia and Malaysia, as China continues its aggressive growth in their neighbourhood.

It is but fait accompli that in a COVID-19 world, the work of diplomacy continues virtually. A good playbook on building on the Australia-India relations has been written by former diplomat Peter Varghese in his report “An India Economic Strategy to 2035” detailing a pathway for the two countries to engage more effectively. The report, now two years and one month old, has never been more relevant, and due to the changing geo-political roles in this part of the world, its missive is now more urgent to follow through and implement.

Both Prime Ministers are enjoying majority support in their countries and both, as evident in the virtual summit, share similar global perspectives and an eagerness to make better alliances. India, for Australia, does bring a heavy weight in to its corner; Australia, for India, does add to its international alliances which can only help. Time for them to cosy up to fight the bullies.

And yes, PM Morrison has promised to cook a khichidi for PM Modi when he visits Australia next. On that agenda – we’ve sent him a trendy recipe from our own collection. 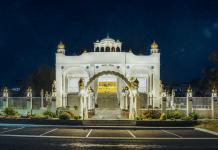 India to offer 1,000 PhD fellowships to ASEAN students at IITs

A glimpse of Azerbaijan’s heritage