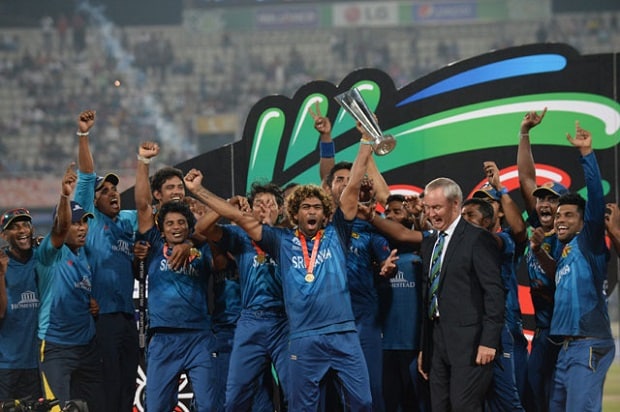 It was a perfect game for Sri Lanka, says Dhoni

India captain Mahendra Singh Dhoni admitted on Sunday April 6 that his batsmen couldn’t execute the plans well in the last four overs against Sri Lanka in the final of the ICC World Twenty20 at the Sher-e-Bangla National Stadium at Mipur (Bangladesh).
“In the middle overs, our batsmen tried our best to get going, but we couldn’t convert the good start,” said Dhoni, after India’s six-wicket loss to Sri Lanka in the final.
Indians were done in by their inability to rotate strike and some smart death bowling by Sri Lankan captain Lasith Malinga (1/23) and Nuwan Kulasekara (1/29) as they surprisingly managed just 19 runs in the last four overs.
“We could have always got those 10-15 runs, but cricket is about those runs. The last four overs they executed their plans very well and for our side that doesn’t play scoops well, that worked for them. Malinga with that slingy action kept bowling it wide. It was a perfect game for them,” said Dhoni.
Virat Kohli was the stand out performer again for India with a fine 77 off 58 balls as the 2007 champions struggled to get 130 for four in 20 overs. Kohli was also adjudged Man of the Tournament.
Dhoni lauded Kohli for his consistent performance and said the Delhi boy has a bright future ahead of him.
“Virat has been brilliant in the last few years. He is someone who makes most of the opportunity. The good thing is that he plays authentic shots and still scores runs. He is got a bright future ahead of them,” he said.

Cricketing stalwarts Mahela Jayawardene and Kumar Sangakkara were finally relieved as they finished their Twenty20 International careers with Sri Lanka breaking the jinx by winning the ICC World T20.
The win came after a series of losses in four ICC World Cup events. Sangakkkara and Jayawardene, both former skippers, were a part of the Sri Lankan side that lost the 2007 and the 2011 50-over World Cups and the 2009 and the 2012 Twenty20 World Cups.
Sangakkara and Jayawardene, who have played 14 years of international cricket together, admitted that the win was sweeter as they had to wait for five ICC finals. The win was also a sweet revenge for their loss to India in the 2011 World Cup ODI final in Mumbai.
“It’s been a long time coming… Waited five finals. Pretty happy I was able to do something for our team,” said Sangakkara, who was adjudged Man of the Match, for his match-winning unbeaten 52.
Jayawardene said Sri Lanka have been waiting for this title desperately since their last World Cup win came in 1996. They had shared the ICC Champions Trophy in 2002 with India after final was washed out twice due to rains.
“We finally managed to break the jinx. Thanks so much to family and friends but this one is for Sri Lankan fans who have been waiting since 1996. It wasn’t a normal match. Lot of emotions as this was the last T20. It hasn’t sunk in yet and it will take a couple of days to get the feeling,” he said.
The two legends were then given a grand farewell by their team mates, who carried them on their shoulders around the packed stadium.

Sangakkara said it was a humbling experience for both him and Jayawardene.
“It means a lot to all of us. We are very humbled by this. The way (Virat) Kohli was batting, he was about to take the game away from us, but the way we bowled was brilliant.
“It was an all-round performance, led by Lasith (Malinga), Angelo (Matthews) had an amazing tournament. India are a tough side, but we are happy to be in the winning side. My family and playing for Sri Lanka are the two most important things that happened to me in my life. Everyone’s got to go and my time is now,” he said.

The fall of Indian football

Can India win on home soil?