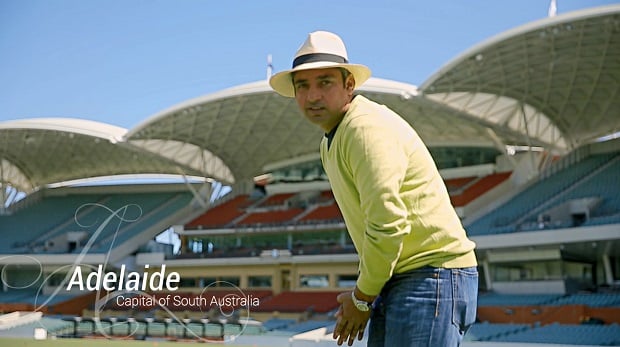 The films are designed to encourage Indians to visit South Australia next year when the Adelaide Oval will host the opening game of the ICC Cricket World Cup – a blockbuster, limited overs cricket match between arch-rivals India and Pakistan on February 15.

The film shows South Australia through the eyes of former Indian cricketer turned television sports commentator Ajay Jadeja and his son on their recent visit to the State. It features key attractions including the Barossa Valley, Kangaroo Island and the Adelaide Hills.

Ajay Jadeja first visited Adelaide and South Australia in 1992 when he toured the country with the then Indian World Cup team under captain Kapil Dev. “He is one of the players we all aspire to be and it was like a dream come true when I walked out with him at the World Cup,” Jadeja said.

Sharing his experience working on the film, Jadeja said the shoot was a walk down memory lane. “This week-long trip has shown me the other side of the city,” Jadeja explained, saying he had shared some great moments with his 12-year-old son Aiman.

“The Adelaide Oval might have changed, but they have still retained the old score board and the Sir Donald Bradman stand, you still see the Cathedral at the back, and people who come to watch a match here will thoroughly enjoy it – the service provided is the best in the world.”

For the busy star, being in the picturesque wine capital of Australia was relaxing and fun. He could spend time with his son, away from the chaos of big cities. “The uniqueness is the pace at which everything in Adelaide moves,” Jadeja said.

On the best place in South Australia Jadeja said, “It’s a tough one, it’s like asking Brian Lara, Sachin Tendulkar or Garry Sobers? Every place that I went was fabulous, but if I had to pick, I loved sandboarding the massive dunes of ‘Little Sahara’ with Aipen at Kangaroo Island.”

The film was launched by South Australian Deputy Premier John Rau on his recent visit to India for a trade mission.

“The India versus Pakistan game is a real draw card for Adelaide and will reach an anticipated global television audience of over one billion people,” Rau said.

“The Cricket World Cup provides a great tourism opportunity in the key market of India and the subcontinent. The film aims to uncover the real South Australia. We wanted to capture the experiences of real people in a creative way.”

Conceptualised and commissioned by the South Australian Tourism Commission as part of its India Strategy 2020, the trilogy is directed by Indian film maker, Deepti Chawla and produced by Daydreamer Pictures.

Accompanied by a soulful, earthy track composed by renowned Bollywood musicians Siddharth and Sangeet Haldipur, the film aims to show content Indian visitors can identify with.

“There is huge potential to showcase our state through the online medium and these films are designed to tap into that potential,” Rau said.

The films will also be supported by a domestic media and communications strategy aimed at the VFR (Visiting Friends and Relatives) segment and Indians in other Australian states as well as the Middle East, Singapore, Malaysia, New Zealand and the US.

To watch the film visit: https://www.youtube.com/watch?v=L9JgDUiEyOk