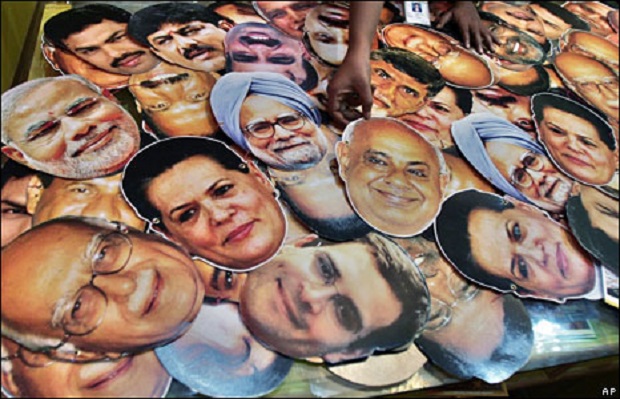 India’s general election, to elect 543 members to the 16th Lok Sabha, or the House of People in the bicameral parliament, kicks off Monday April 7, with balloting starting from two states in the northeast, Assam and Tripura.
The nine-phase voting, that will be done in 930,000 polling stations across the length and breadth of this huge nation with a staggering 814 million electorate, will be spread over 36 days from April 7 to May 12.
This election, many analysts say, is different in many ways different from the elections of the past two decades with more focus on individual leaders, wide use of social media and rise of the “aspirational class” and the large number of first-time voters.
Stakes are high for the participants with relatively young leaders leading the charge of Congress and BJP and regional parties, led by leaders nursing national ambitions, threatening to upset the applecart of the established players. Although campaigning has been surcharged, it has so far been peaceful.
The election also raises prospects of a leader born after Independence becoming the prime minister. Bharatiya Janata Party has declared Narendra Modi, 63, as its prime ministerial candidate and Rahul Gandhi, 43, is seen as the de facto prime ministerial candidate of the Congress.
Aam Aadmi Party leader Arvind Kejriwal, 45, whose one-and-a-half-year-old party has created a buzz in the political arena on its strong anti-corruption plank, is also aiming for a role in government formation as are a clutch regional players from West Bengal in the east to Tamil Nadu in the south.
Campaigning has been intense but the real battle will be fought for control of the Hindi-speaking heartland where two states, Uttar Pradesh and Bihar, ironically among the least developed of Indian states, account for between them 120 (80 from UP and 40 from Bihar) MPs. Delhi goes to the polls on April 10 to elect 7 MPs.
A study last year by Internet and Mobile Association of India and IRIS knowledge foundation had said that there were 160 Lok Sabha constituencies in which social media would be a critical tool to influence people’s voting choices. Almost 68 percent of the country’s 1.2 billion population is estimated to be below the age of 35.
Political parties are making special efforts to woo the youth by talking of issues of economic growth and jobs.
Successive opinion polls have forecast that BJP-led NDA would be the prime contender for power. But despite a grim forecast about its prospects, due to a stagnant economy and allegations of corruption during five years of United Progressive Alliance II, the Congress is making a determined bid to get another mandate from people.
The Congress is banking on its welfare initiatives including rights-based legislations to woo the poor and subaltern classes. Its leaders have also asserted that an unprecedented 14 million people have been brought out of poverty in the last 10 years.
Congress vice president Rahul Gandhi, who is leading the party’s campaign, has been targeting BJP and Modi over “divisive politics”. Gandhi is slated to address nearly 100 meetings over the next few weeks.
The BJP is riding on the perceived popularity of Modi, who is slated to address around 150 rallies across the country in over a month. Modi has been seeking to tap into the apparent discontent over UPA’s performance by promising a brighter future to the people with greater security and enhanced growth.
BJP vice president Mukhtar Abbas Naqvi said that real issues for the party were development, good governance, employment, and national security.
“We are fighting the election on economic issues. Congress is trying to communalise it,” Naqvi told IANS.
Political analyst Rizwan Qaiser, who teaches at Jamia Millia Islamia University, said that the 2014 Lok Sabha election was “extraordinary” as stakes were very high for the political players.
“Stakes are particularly high for the BJP. The way candidature of Modi is being projected, one person has overshadowed the party, which was did not happen earlier,” Qaiser told IANS.
He said stakes were also high for the Congress as Rahul Gandhi, who is leading the party’s campaign, has “not been able to capture imagination of people”.
“The regional parties are becoming assertive. I think these parties need to be watched carefully,” he added.
The number of voters has risen since the first election in 1951-52. It was about 173 million in 1951-52 and nearly 814 million in 2014.
A.S. Narang, a professor of political science at the Indira Gandhi National Open University, said the election was getting centred around an individual.
“It happened during Indira Gandhi years and then to some extent when Rajiv Gandhi was in the fray. Now it is being fought (by the BJP) in the name of an individual (Modi),” Narang said.
He said youth participation is expected to be large and they are showing keen interest in election.