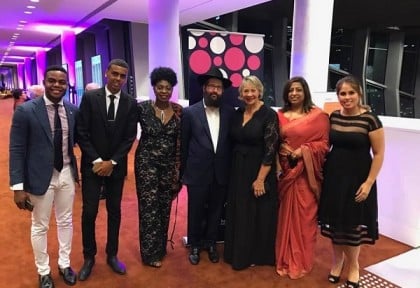 Coinciding with the United Nations Day for the Elimination of Racial Discrimination, the community calendar in Victoria was chock-a-block with celebrations of multiculturalism as part of Cultural Diversity Week 2017.
Headlining the series of events was the Premier’s Gala Dinner held at the Melbourne Convention Centre. Over 1400 people, from all backgrounds, attended the prestigious gala; many of them resplendent in their traditional attire.


This year Cultural Diversity Week marked its 15th year under the aegis of the Victorian Multicultural Commission (VMC) with support from the Victorian Government.
A range of events and activities, across regional Victoria and metropolitan Melbourne, were held to showcase vibrant multiculturalism and to celebrate the cultural richness of Victoria’s community.
The ‘Victorian. And Proud Of It’ campaign is part of the recently launched Multicultural Policy Statement by the Victorian Government that is encouraging Victorians to share their stories and reflect on their journey so far.
Similarly, this year’s theme of ‘Our Journey, Our Stories’ provided an avenue for diverse perspectives, cultures and values to be accepted, appreciated and celebrated.
In her speech, Victoria’s Governor Linda Dessau AC reflected on her own story as a first generation Australian child. Her father arrived in Melbourne in 1929 to be safe from looming threats to Jewish families in Europe. She recollected how her father always considered Australia to be safe, fair, stable and a good place to grow with opportunities.
“Stories matter because they help us to see one another, not as groups or stereotypes or caricatures, but as individuals – people made up of so much more than what we wear, where or how we pray, what or how we eat or whom or how we marry. And they matter because we quickly see that the essence of our stories is similar in so many ways,” Governor Dessau said.
“If we personalise our stories, we can rise above the usual rhetoric, live together without mistrust, and celebrate and capitalise upon our diversity.”

“In Victoria, we do not tolerate diversity, we celebrate it,” said the Premier Daniel Andrews as he thanked everyone for their contribution in making Victoria a special state.
According to the Premier, Victoria would not be the strong, respectful, dynamic, creative state that it is and would not be the “world’s most stunning example of multiculturalism”, if not for the contributions, commitment and passion of its diverse community.
He also spoke of the challenges to modern Victoria and to its leadership. According to him there are some people who are worried by the modern face of Victoria, who feel fearful and can unfortunately react with prejudice or inequality.
In response to this challenge he said that the framework of the Victorian Multicultural Policy would ensure that we never accept discrimination in any form and that we insist on equality.
“We are better than the prejudice, hatred, division and fraudulent policies put forward by those who do not understand the Victorian ways,” the Premier said. “We know better than that and let me tell you why. Because we are Victorians and we are proud of it,” he said, as he ended his speech to thunderous applause.
The multicultural audience also heard from Robin Scott, Minister for Multicultural Affairs. Matthew Guy Leader of the Opposition was unable to attend due to an interstate commitment. Helen Kapalos, Chairperson of VMC was the official MC for the evening. She shared the role with other VMC commissioners.

Art transcended all borders as the gala continued to offer quality entertainment through musical and dance performances from local artists. Didgeridoo artist Mitch Firth collaborated with Chinese Australian artist Joel Ma and Provokativ Dance Ensemble to create an impressive opening act during dinner.
Korean Australian pop artist Hanny Lee, the Sri Lankan Cultural Ensemble of Australia, Downtime Jazz Band, Lehenda Ukranian Dance Company, Kylie Auldist, Jali Buba Kuyateh’s Afro Manding music and Zoj’s Persian music added to the eclectic mix of cultural offerings.
The audience particularly enjoyed the upbeat Mzuri Dance from Sudan and Ethiopia, the sensuous flamenco by Arte Kanela, vintage Bollywood from Bombay Royale and exuberant Greek dances by the Zorba Brothers. The audience was invited to join the dance groups on stage in several interactive sessions. Many happily became part of the performance as they experienced the lights, music and action first hand.
Post event feedback was mostly positive, however Inga Peulich MLC, Shadow Minister for Multicultural Affairs, pointed out that for the first time in the history of the Premier’s Gala Dinner, the Australian national anthem was not played.
She said in a press release, “Daniel Andrews and Victorian Labor are failing the test of leadership by cleansing references to our national identity and silencing our national anthem.”
- Advertisement -
Share
WhatsApp
Facebook
Twitter
Linkedin
Previous articleFather Tomy forgives attacker
Next articleLeadership with wings