Sydney to get its own Vedic centre soon 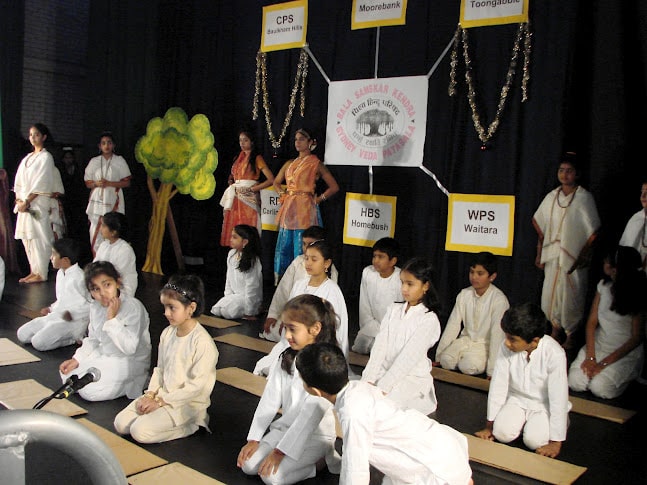 From a handful of students in 2008 to 150 children besides 90 adults, the Sydney Veda Pathashala (SVP) has certainly gone from strength to strength. Today SVP, in conjunction with Bala Samskar Kendra (BSK), is very active all across Sydney, promoting the learning of Sanskrit through Vedic chanting as well as teaching Hindu scripture and values. Managed by the Vishwa Hindu Parishad (World Hindu Council of Australia Inc), the organisation has also established roots in Melbourne and Brisbane recently.

Vedic chanting, an ancient oral tradition is recognised as an intangible global cultural heritage by UNESCO.

The two institutions recently celebrated their annual day with a grand function at the Roselea Community Centre in Beecroft.

After a traditional welcome, children and adults from various schools showed off their newly acquired skills through a series of cultural performances that included Sanskrit skits, re-enactments from the epics as well as shloka chanting. SVP president R Subramaniam and BSK Centre coordinator Shilpa Shriram received special volunteer awards from Minister Victor Dominello. Volunteer teachers were also felicitated on the occasion.

The event was well attended by officials from the Department of Education as well as politicians, members of parliament and local community leaders. Centre coordinators Shubashree Balachander, Rani Sundar and Akila Ramarathinam addressed the gathering and highlighted the achievements of the calendar year.

“Sanskrit Vedic learning is becoming a great phenomenon in our community now. We are thrilled at the outcome,” joint general secretary of VHP Akila Ramarathinam told Indian Link.

“Launched during the first Hindu Conference in 2008, the Veda Pathashala is the first of its kind outside India. Because of much public support, this is going to grow further and become a role model for other countries. Our sincere thanks to NSW Dept of Education and NSW Federation of Community Language Schools for their help and continuous support”, she added.

She also revealed that to cope with increasing demand, SVP soon hopes to construct the pathshala at their own premises in Greystanes.

“We ask the community to donate generously towards this cause”, she stated. “Land has already been purchased and consultations are on for the next stage”.

Currently Veda classes are held at three centres across Sydney, while BSK schools are run at six centres (Hornsby, Baulkham Hills, Toongabbie, Moorebank, Carlingford and Homebush). The Homebush centre which was only launched early this year has already met with great success. Approved by the Department of Education, the schools follow a structured curriculum, where senior children take regular Sanskrit test and exams.

“We currently have 30 teachers and an equal number of youth volunteers”, Ramarathinam explained. Many teachers have completed the Language certificate course conducted by the department, she added.

As part of the curriculum, the weekend classes teach Sanskrit language, Hindu values and leadership skills. Rudra Japam, Vishnu and Lalitha Sahasranamam, Gita, Ramayana are some of the texts taught at these classes.

The centres have also participated in mainstream events like Clean Up Australia and tree plantation drives besides running Hindu camps for special needs children.

Significantly, students of SVP took part in the traditional welcome ceremony of the Queen’s Baton Relay in Sydney ahead of the Delhi Commonwealth Games.