Smiles light up the CBD! 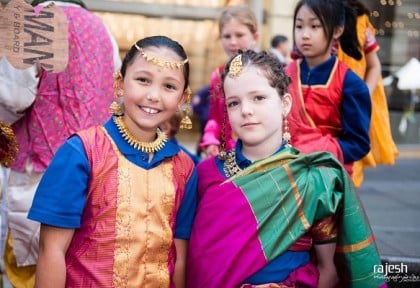 The Deepavali Mela at Martin Place is a hit once again

The cool winds and light rain showers couldn’t dampen the enthusiasm of those gathered in the heart of the Sydney CBD for the annual Hindu Council of Australia Deepavali celebrations at Martin Place. A precursor to the major mela at Parramatta Park on 23 October, Sydney’s busy professionals took time out to get a glimpse of the kaleidoscope of colour and fun that encompass Diwali celebrations.

The Festival of Lights was brought alive with various vibrant performances, though some of the lunchtime office worker crowd seemed more interested in the food than what was happening on stage.
The weather was especially unfortunate for the little performers whose beautiful but bare costumes left them exposed to the elements.

The audience was treated to a delightful array of routines from Bollywood numbers to Garba to classical dance, and later there was even a magic show!
Students from various public schools and Hindi schools took part, demonstrating their knowledge of the forms of traditional Indian dress and sweetly intoning, “Mera naam…” as they came on stage.

Another group, dressed as the Hindu gods Ram, Sita, Lakshman, and Hanuman, the magic deer and evil Ravan, gave the audience a brief window into the tales of the epic Ramayana.
Several local and state politicians came to the stage for the ceremonial lighting of the diya, and a fashion parade showcased local Indian Australian designers.

Steady streams of people were queued at the food stalls, stocked with Indian favourites like papdi chaat and twisty jalebi. For busy office workers, it would have been good to have some more stalls so they didn’t have to wait.
The giant Ravan head further up the plaza drew much attention, with many stopping to take selfies with the oversize pink demon. Others took the opportunity to play dress-ups and try on traditional Indian sarees, kurtas and turbans.

Once again the Hindu Council’s Deepavali Festival brought smiles and more to office workers, keen to learn about and participate in the celebrations.