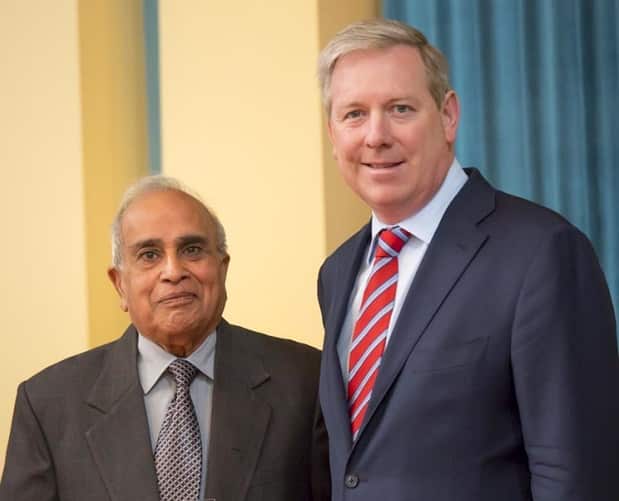 SMART and NAMASTE could be terms that describe him and his friendly nature, but in fact, these are two platforms he initiated as programs for community seniors.

With SMART (Start Moving And Remain Trim), he targets the health concerns of seniors like him by encouraging them to participate in yoga, dance, zumba and similar activities.

At 78, Kumar is passionate about the welfare of seniors. His voluntary efforts with seniors for some 15 years now, in the Indian community as well as in the mainstream, have just won him a Senior Achiever Award instituted by the Council on the Ageing.

Kumar was one of 14 seniors honoured by the Minister for Ageing, David Davis, at the 2014 Victorian Senior of the Year Awards ceremony at Government House, held in early October.

He was lauded as “an advocate for projects which address the housing and health support needs of older people who struggle to connect with health and welfare services”.

“At about age 65, as I found myself ageing and facing health and welfare concerns, I felt the need to reach out to others who were sailing in the same boat,” Kumar tells Indian Link.

He began looking into the worries of older Australians with regard to travel concessions, social isolation, recreational programs and health agendas. The particular concerns of Indian seniors were, of course, not lost on him, as they struggle to maintain a quality of life balancing health and family issues on the one side, and acculturation and assimilation on the other. As the senior sector of our own community grows, it is crying out for welfare programs at several levels.

The burgeoning of many different community organisations catering to Indian seniors such as NRISA is but a case in point. No doubt the work done by Kumar and others in this sector will go a long way in benefitting the community at large.

Of course Kumar leads by example in his personal life.While he enjoys the company of his children and grandchildren and helps out wherever he can over and beyond the story-telling duties, he also keeps his brain active and fertile by continuing to be involved in his lifelong field of Operations Research (OR) and Optimisation. He still writes and publishes, and stays in touch with ex colleagues and students from RMIT through email.

Reasonably web-savvy, he keeps tabs on economic and cultural developments around him.

Volunteering as an activity in your retirement years has many potential physical as well as emotional payoffs. It is a satisfying activity to fill spare time, a way to contribute to society and helps look after others in need. It provides an opportunity to meet others and make new friends, to share your skills and experience as well as acquire new ones, and to stay active and alert. It has also been shown to stave off depression and increase happiness.

Santosh Kumar is living proof of all of this, and more.