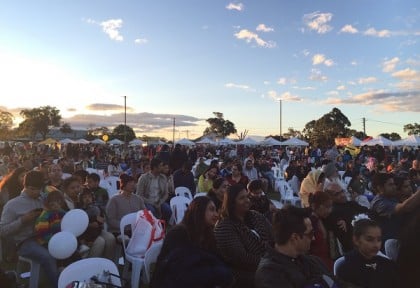 The CIA Diwali Fair spreads light across the community

Despite foggy and changing weather conditions, the Diwali Fair held by the Council of Indian Australians delivered a spectrum of colours to celebrate the festival of lights.

The event, which was held at Castle Hill Showgrounds, hosted a combination of stalls, kids activities and stage performances showcasing the unique and diverse performing arts talent of the Indian subcontinent. Multi-ethnic South Asian food stalls were swarmed with event-goers as they offered a wide selection of delicacies including vegetarian options, chaat, and South Indian food specialties. While Indian restaurants ran most of the food stalls across Sydney, one prominent stall ‘Care One Care All’ served up food in the name for charity, hoping to extend the spirit to Diwali to all South Asians, including the disadvantaged.
Stall helper Jas said Care One Care All started as a family charity, and grew as more people decided to volunteer and sell baked goods in aid of others.
“People just love to come out and eat, so it may as well as be for a good cause. We have raised lots of funds and it is a good way to spread awareness for ourselves, so that we can help people that cannot help themselves,” said Jas.
“Everyone here loves the food. It’s not just about having lunch. The donations are going to help people overseas who do not have access to food.”
Care One Care All donates 100 per cent of their proceeds to charities in India, helping impoverished girls and children who have limited access to food, clothes and shelter.

Other features at the CIA Diwali event included stalls displaying vibrant Indian attire and jewellery for sale, henna painting and kids’ rides and entertainment. While the festival was organised for Indians across the Hills District and beyond to celebrate and partake in Deepavali, it also served as a cultural introduction to other Australians, who were able to immerse themselves and become a part of the festive experience.
Brittney Cox, who found out about the event through her friend, a performer in one of the stage shows, said the event changed her perceptions of Indian culture. She acknowledged that the event enhanced her understanding of the plethora of ways Indian traditions can be celebrated.
“The event has been great so far, the range of food is great and the performances have been really engaging. I have loved Indian food, it’s delicious, but I have really been looking forward to experiencing the authenticity of it,” Cox said. “I didn’t really realise the music and dances were so modern until I was watching the performances, and I am amazed to see that it has sustained and grown with modern society. It’s lovely to see Indian culture in Australia, since the culture is so rich. Australia appreciates it.”
With an array of song and dance performances from classical and folk genres to Bollywood blockbuster hits, tradition and modernity were intertwined to celebrate Diwali and Indian culture at large.
Speeches presented by politicians and dignitaries, including Senator Zed Selelja, Mayor of the Hills Shire Council Cr Yvonne Keanne and Consul General of India in Sydney Mr B Vanlalvawna, spoke of the integral contribution the Indian community makes to Australia’s multicultural landscape.

President of the Council of Indian Australians Praful Desai said that holding the event in the Hills District has been pivotal, due to the increasing population of Indians in these areas who may often miss out on the major Diwali festivals in Parramatta and Blacktown.
However, he also articulated that holding such events isn’t only about celebration, but a platform for cultural enlightenment and connection.
“We need to have our roots, we need to have our culture and we need to showcase diversity,” he said.
“We need to be linking Indian Australians to their heritage. Our children can lose their Indian values and identity living in here in Australia, but if they participate and keep up with their tradition, they can still uphold our culture,” he expressed.
“We want to support multiculturalism with the wider Australian community as well. Because when you celebrate multiculturalism, it is not necessarily just about enjoying the festival but it is interacting with the different cultures.”