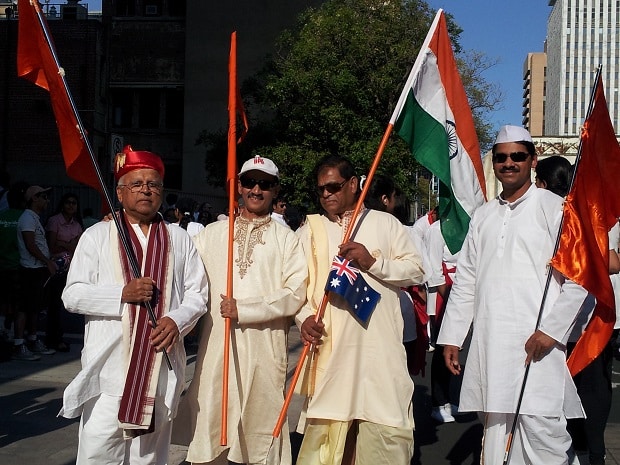 Reading Time: 4 minutesThe Indian contingent was ably represented by the Maharashtrian, Punjabi and other communities

In Adelaide, the place to be on Australia Day is in the centre of the City. This year was extra special with lots of sporting and other events happening throughout the day.

Of the two major sporting events, the first was the finish of the Tour Down Under which Australian Simon Garet won for the second year in a row, and it was amazing to watch the cyclists battling for the coveted prize in 40+ degrees heat!

The other was, of course, the fifth one-day match against England, which Australia won by 5 runs. Watson was bowling the last over and England needed 6 runs from 3 balls to win. Everyone had watched with bated breath and great sighs. Treadwell edged it and the ball was in the keeper’s hands… OUT!!! And the uproar from the stadium said it all – Australia had won by 5 runs! What a thriller!!

Amidst all this excitement was the Australia Day Parade down King William Street with about 50 different ethnic communities participating. And what a presence from the Indian contingent! The Maharashtrian community stole the show with their Shivgarjan dhol, a full band set with various kinds of drums straight from Pune, played by local Marathi youth roaring down the road, drumming the typical street rhythms of India that had the spectators clapping their hands, tapping their feet and often joining the parade to dance along!

The dhol players were followed by lezim dancers enacting this particularly Maharashtrian dance form in a very disciplined manner. It was a pleasure to see so many girls moving so rhythmically to the tunes of the band. It was obvious they had put in many hours of practice and were enjoying themselves. It is very rare to see lezims in Australia, so it was a rare treat indeed.

Next came the float on which the Maharashtrian community paid homage to that greatest of Marathas, Chatrapathi Shivaji. The float truck was decorated with Indian symbols like Om and the Swastik, among others, and was displayed like a room in a palace. Inside sat Shivaji Maharaj on one side with his soldiers in attendance, and on the other side sat Jijabai, his mother, with a few women and children, members of the household. The costumes, including swords and shields, were straight out of Indian historic movies or plays, and made me feel a tinge of nostalgic for the dramas with which I grew up.

The Marathi section was the main part of the Indian contingent under the banner of the Indian Association of South Australia, that was followed by many people wearing traditional Indian clothes, carrying orange flags, the tricolour and the Australian flag. All walked along to the sounds of that magnificent band.

Following them came the Punjabi contingent with their own drummers, enthusiastically dancing the bhangra, resplendent in traditional clothes. Members of the Tamil Association came next, followed by members of BAPS also with their drum, and young men and women dancing the garba.

It was a fantastic turnout with so many traditions of India displayed in costumes and dance forms to the people of Adelaide. From the minute the parade started, the Maharashtrian contingent’s loud cry of ‘Shivaji Maharaj ki jai’ accompanied by loud drumming set the tone, which continued until the conclusion of the parade, as the participants walked by the River Torrens along Elder Park and posed for photos. Everyone wanted to have a look at the colourful and attractive Indian group.

It was heart-warming to see how well appreciated and popular this group was, considering the amount of hard work that had gone into the preparation and presentation.

“Even last night we were up till about 2am finishing painting the banners and getting all the things ready”, said Mr Shashikanth Salunkhe of the Shivagarjan dhol group.

It was quite a challenge for the 12-piece dhol to practice, for the dancers to learn the steps of the dance with the lezims, and enact this in time with the tunes played by the band. Practice sessions started several weeks in advance over weekends, which were also dedicated to making the costumes and props for the Shivaji tableau. The fantastic results showed how much effort had bee put in by everybody.

All the members of the Maharashtrian community who joined in the parade stood out in their resplendent clothes – women in their traditionally draped nine-yard saris and jewellery, men in dhoti-kurta ensembles and peshwa turbans – it definitely impressed and surprised the people of Adelaide because the effect was so different from the generic Indian clothes they are used to seeing.

After the parade, which also had a Jagannath Rath by Hare Krishna devotees, everyone joined the huge crowd at Elder Park to relax and listen to an Aussie concert, and enjoy food from different parts of the world. The show ended with fireworks. It was certainly a very enjoyable day – a win in the cycling Tour Down Under, another win in the cricket ODI and the Indian contingent winning the hearts of all who came to watch the Australia Day Parade!