Sewing the seeds of change 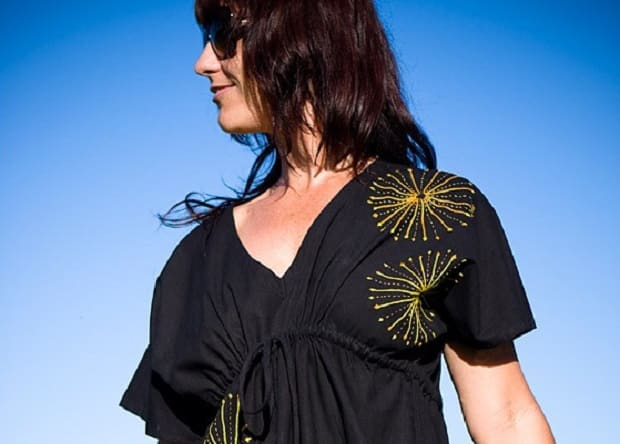 Meg Wilkinson’s passion for textiles and clothing began with art.  She completed a Fine Arts degree majoring in jewellery and metal smithing at the University of Tasmania.
“I think I was always a bit of a frustrated fashion designer,” laughs Meg.
After making jewellery for many years she went back to TAFE to study fashion and costume design and developed the idea of starting an ethical clothing business in India.
Meg’s first trip to India was 15 years ago.  “I landed at 2.00 am and breathed in the Delhi fragrance,” says Meg.  “My heart just opened and I knew I’d come home”.
What drives an Australian to start a quest to help people on the other side of the world? A passion for textiles and hand-embroidery, a desire to preserve traditional skills and the perseverance to produce clothing that directly benefits the workers.
“I met a lot of people who go to Pushkar to get clothes made,” said Meg, “because making it in Australia is too expensive”.
Whilst working for The Body Shop, Meg was inspired by their “Trade Not Aid” program, which advocates going into developing countries and buying products from the source. Meg wanted to buy directly from the artists and pay them a little above the normal wage. She saw the difference it made to their lives and village infrastructure.
“It didn’t cost much more but made a huge difference,” she says.
A “major life shift” enabled Meg to resume study and travel to India.  Whilst staying in a guesthouse in Pushkar she fell in love with its manager, Savar Ram. She told him about her business idea and they started Beej together in 2008.
‘Beej’ is the Hindi word for ‘seed’, and with this enterprise Meg believes she is ‘sewing the seeds of change’.
Beej employs workers from a small village about 20 kms outside Pushkar. The initial set up was not without its difficulties.
“I wanted to create clothing that used traditional skills with a modern edge and I was aiming at women 30 and over,” says Meg. “I thought the local women would be fine to use traditional skills so I was shocked to learn that those skills were dying out because machine embroidery was replacing traditional hand embroidery”.
Meg had to train the women to create the embroidery for her designs. Once the training was underway many of the women’s grandmothers shared their memories about when they practised the craft.
“It was difficult work for the women at first,” says Meg. “They are used to hard work (as the village is a farming community) but now they can have a break and do work that’s more social and less physical”.
Meg keeps her collections and runs small, trying to be as sustainable as possible. She points out that the women aren’t available all year because of farm work so they can work for Beej as it suits them. The women can earn extra money as Beej pays Rs 200 a day minimum.
“Most women make Rs 70 on farms per day and I pay per piece rather than per day as an incentive. No one earns under 200 rupees and they are not tied to the job”.
Her practical approach is balanced with a desire to educate Australians about fair trade products.  Her aim is to “empower people who have nothing and people who have everything”. She cites the recent building collapse in Bangladesh as an example of why there is a need for greater scrutiny of manufacturing practises.
“Ethical fashion is talked about but people are not acting on it,” says Meg.
She points out that consumers need to be wary of labelling and how fair trade goods are produced. Fair trade is a general term and a brand name and buyers need to be aware that “an item is Fair trade cotton only if it’s bought from that particular company”.
The same problem exists with the label “organic.” Cotton manufacturing using child labour has been reported in 6 of the 7 top countries that produce organic cotton. Beej has taken a considered approach to producing ethical clothing. The bright and beautiful clothing is made from surplus cotton and low chemical dyes. “We wanted to used Khadi hand-woven cotton, but couldn’t get enough so we buy from local cotton manufacturers who store an excess of cotton that would otherwise go to waste,” says Meg. “Our clothes are dyed with low impact chemical dyes that don’t run and we use Rangoli threads made in India”.
Beej aims to use “upcycled” material including Gujarat embroidery and employs local artisans.
In 5 years Beej has shown steady growth. They sell online and at selected Festivals and markets including Woodford. Music Festival, WOMAD, designer markets like Brisbane’s Finders Keepers and the Qld Fair Trade market.  Meg wants to sell clothes “where people are excited about something that has a story and are giving back to the community. I want them to come to our stall and hear the background, knowing they’ve made a difference and started on the path of buying ethical products and supporting ethical trade. I want people to think”.
She concludes, “If you have a dream and follow it with a pure intention everything falls into place. It’s totally possible”.