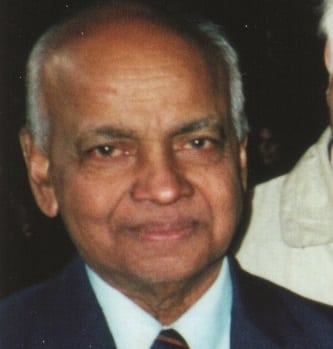 Reading Time: 2 minutesRaman Perumpillil Marar, who migrated to Australia about five decades ago from Cheranalloor in Kerela, was very well respected in both the Indian and wider Australian communities. He passed away on 31/01/15 at Monash Hospital, Clayton, due to ill health. He was 87 years old. He is survived by his wife Mrs Sati Marar and two children, Sunitha and Sudhir.

Dr Marar was the recipient of the Order of Australia Medal (OAM) in the Queen’s Birthday Honours list for Victoria in 2002, for service to the Indian community, particularly through the Federation of Indian Associations of Victoria. He was also the first OAM recipient from the Malayalee community.

Dr Marar also played a key role in the establishment of the Shiva Vishnu Temple in Melbourne.

According to Madhu Nair from the Malayalee Seniors Association, and a close family friend, “Dr Marar was very supportive and helpful by nature He worked tirelessly for the goodness of the temple and the community and was always willing to help new arrivals from India.”

Madras Banyan Tree posted as below:

“Dr Raman Marar. The gentlest soul we have known. A very precious customer of Madras Banyan Tree and a very revered Victorian is no more. RIP Sir. Our heartfelt condolences to his family and friends.”